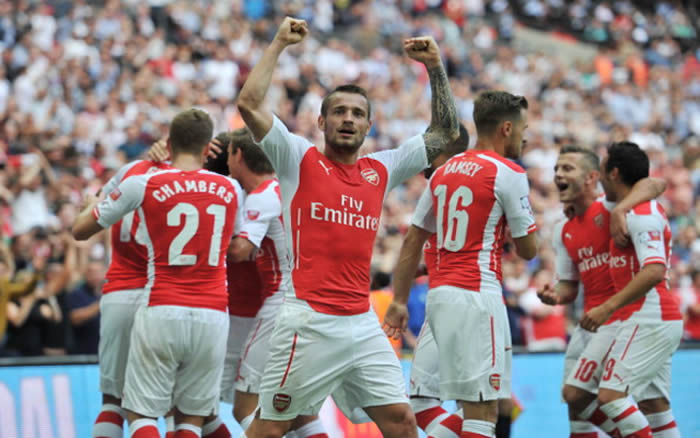 Man, it’s a busy, busy day today. For me. Not necessarily for Arsenal, although I’m sure they’ll be doing all kinds of important training and tactics stuff at London Colney.

It was funny yesterday when Mesut Ozil sent a Tweet welcoming Shad Forsythe to the club and lots of websites ran stories about how we’d signed Shad Forsythe as if it had just happened. Shouldn’t there be some kind of time frame after which it’s not acceptable to publish a story with information that everybody knows?

At least on quiet days it’ll give us something to do here:

Anyway, it got me thinking about Saturday’s team and who, given the injuries and lack of fitness in some quarters, will be starting. Here’s who I think are the definites:

Wojciech Szczesny – David Ospina is not yet fit and although Damian Martinez has been promoted to the first team squad is available, there’s no question our number 1 will start.

As an aside, Damian Martinez now wants to be known as Emiliano Martinez (that’s his second name). If I were going to change my name as a footballer I’d use something more fearsome like Thor, Snarly O’Toole or NippleReefer, but that’s just me.

Mathieu Debuchy – The Frenchman has been talking about how he jumped at the chance to join the Gunners from Newcastle. With no disrespect to Newcastle, I suspect there are players who would have jumped off a tall building to get away from Alain Pardieux.  He said:

When my agents told me Arsenal were interested, I said yes straight away! There was no question, no debate, no doubt, nothing! You don’t turn down a club like Arsenal. A lot of players would like to be in my shoes right now.

Calum Chambers – the young man who can play right back, centre-half, defensive midfield, inside-left, mid-wicket, long-reliever and out-half, impressed during the Emirates Cup and the Community Shield. I won’t say he’s there by default, but our defensive issues mean we have little choice but to use the former Southampton man from the start.

Kieran Gibbs – I think this could be the season when he makes a big step-forward. Hopefully he can remain injury free because if he does I think he’s going to rock it.

Mikel Arteta – The new captain missed the opening game of last season and look what happened! Having just been given the armband for the season, he’s a certain starter unless he picks up some kind of training ground knock.

Jack Wilshere – it’s the season for him to make a real impact in this team, but with everyone fit it’s not clear exactly how he fits into it. However, not everyone is fit and this gives him a chance to impress and make the manager’s life a bit difficult, which is exactly what I hope he’ll do.

If he can forge a good partnership with Aaron Ramsey, then it certainly gives Arsene something to think about.

Aaron Ramsey – So good, so handsome. That is all.

Santi Cazorla – In the absence of Mesut Ozil, a good chunk of the creative burden falls on him, but he always looks like he enjoys himself, and is clearly on a shit-hot scoring run with two goals in his last two games. What do you mean the two games were months apart? Must you always find something to complain about? Pffff …

Alexis – Shorts up, turbo-jets on: the Chilean will most likely be deployed down the right with some licence to cut inside and cause mayhem, havoc, bedlam and disorder. However, under specific orders from The Shad, he’s not allowed fashion pandemonium, tumult or turmoil until he’s fully fit.

Olivier Giroud – It’s really down to a choice between the HFB and Yaya Sanogo. The younger of our two French strikers is probably fitter, having had a full pre-season and that showed in his first half against Man City which was energetic. However, the key issue is goals.

Giroud has a track record of scoring them, Sanogo does not, as yet. It would be something of a risk to start him, but it’s also obvious the manager has more faith in him than a lot of onlookers, so him getting the nod wouldn’t shock me. All the same, I think Arsene will go with the more senior man.

So there’s really only one questions that needs to be answered and that is: How is Laurent Koscielny’s Achilles? If it’s not ready, then you have to assume Nacho Monreal will play alongside Calum Chambers. Although we’ve got some young central defenders at our disposal – like Ignasi Miquel and Isaac Hayden – it’s difficult to see the manager deploying a pairing that callow.

Chambers, as promising as he is, is very raw and I think the boss will want somebody with a bit of experience beside him. Monreal is hardly a long-term option in that position, but in the very short-term he may have to do.

That said, I’m hopeful that our transfer market quietude this week is down to the fact that Koscielny is responding well to treatment. If it was serious we surely would have been forced into doing business quickly to fill that gap. As far as I know a player has to be signed and registered before midday tomorrow to be eligible for Saturday’s game, so we’re leaving it late if we do need somebody.

Anyway, no doubt we’ll get a fitness update later on, and the manager’s first press conference of the new Premier League season will give us more detail.

For now, there’s stuff to do and, of course, the Arsecast returns tomorrow, and I’ve got to write the traditional pre-season preview, so it’s a busy day. Tim Stillman’s column is here later, more from me in the morning.