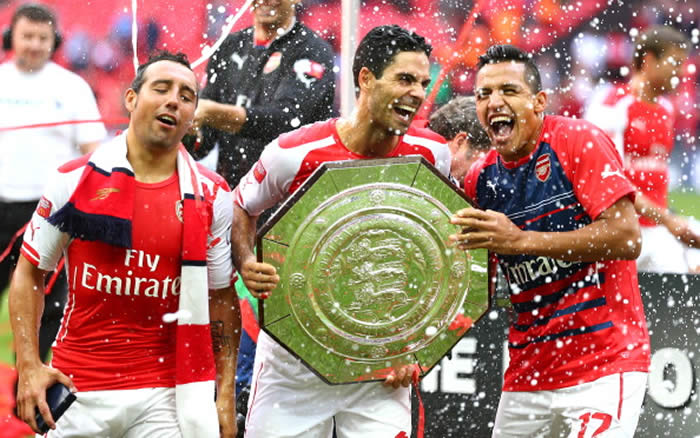 Regardless of the true importance of the Community Shield, yesterday was a day from which Arsenal can draw nothing but positives.

“City were missing players”, they said afterwards. True, but then so were we. Three World Cup winning ones at that, and two who are definite starters in our first XI (not to mention Theo Walcott). “City didn’t care”, they said, which might well also be true but then that says something about them because the Arsenal players definitely did.

Having been so roundly beaten by them last season, losing yesterday would have added some doubt to our minds before the start of a new season. Winning, I think, will be something of a psychological boon to us. It’s not that we’ve put to bed those games from last season but we certainly haven’t done ourselves any harm by comprehensively outplaying the champions and we thoroughly deserved to win the Community Shield yesterday.

Arsenal bossed the first half. Anything City had to offer we dealt with quite comfortably, and we looked far more dangerous going forward. Santi Cazorla and Aaron Ramsey seem to enjoy Wembley. Both scored in the cup final in May, both struck again yesterday. Cazorla’s feint inside the D left Clichy twisting and turning, and his low shot fizzed into the bottom corner.

Ramsey’s goal was, perhaps, a sign of things to come this season from Arsenal. It was Mikel Arteta who said afterwards (with a smile), “We’ve got more pace up front now”, so when Wilshere, from deep, found Alexis down the right he took off, fed Sanogo who had run in behind, and the Frenchman’s lay-off to the Welshman saw him take a sublime first touch which allowed him to drive it beyond a static Caballero and into the bottom corner.

Alexis himself might have made it 3-0 before the break but for some smart goalkeeping; again we saw the threat of pace as he burst from deep to find himself almost one on one. The manager made half-time changes, including bringing on Giroud for Sanogo and the senior of the two Frenchman put the game emphatically beyond City with a cracking strike from 25 yards.

Cutting inside onto his left foot, he spanked a fine shot – which I thought might have taken a deflection, but replays show it was clean. It went up and over the hapless Caballero (Joe Hart doesn’t have much to worry about on this evidence), and from that point there was no doubt as to how the game would end up.

The manager made more changes, rotating his squad to build up fitness, and I do wonder if there’s anything to take from the fact that Joel Campbell got just five minutes of a game which was more or less won. As well as he played against Benfica in the Emirates Cup, wouldn’t there be more to be learned from how he does in games like yesterday’s (regardless of City’s indifference to it)? Just an observation, and I could be reading way too much into it.

We heard lots about our inability to beat teams in the top four last season. Obviously yesterday doesn’t provide us with anything but confidence and belief for the Premier League, but those are still important things to take from the game. You can’t go overboard, but I thought we played really well for periods and that, more than any other qualifier, is why we won the game.  It was also another part of our fitness preparation as we get ready for Crystal Palace this Saturday.

If there was something of a cloud to all the silver-lining, it’s the fact that Laurent Koscielny was taken off at half-time with what the manager reported afterwards as an ‘Achilles tendon problem’. He might now miss the season opener so with Per Mertesacker only arriving back today and Thomas Vermaelen now living it up in the Spanish sunshine, it leaves us short at centre-half.

Calum Chambers had an impressive competitive debut there yesterday but obviously it’s a lot to expect that a 19 year old with not much experience can hold the fort there with a makeweight option like Monreal beside him. That’s not to dismiss Monreal, but he’s a left-back, not a central defender, and as much as anywhere else on the pitch you need players who are specialists in that position.

Our need for a signing in this area has gone from pressing to urgent, so hopefully the manager has his targets. For all the great work we’ve done this summer, it would be painful if our defensive deficiencies proved in any way costly at the start of the season.

The manager also confirmed afterwards that Mikel Arteta would be the new club captain, with Per Mertesacker now officially vice-captain. I don’t think that’s any surprise. The Spaniard is a player the manager likes and trusts a great deal, as well as being respected greatly by the players. His influence in the dressing room is overwhelmingly positive, he sets a good example, and together with Mertesacker he’ll enjoy the role.

It’s not like it’s new for him either. With Vermaelen benched for most of last season, Arteta was the de facto captain anyway, so this is just natural progression. I know there’s a growing trend which says that our chances of silverware are utterly dependent on getting that fabled DM and it’s not a signing I would be opposed to at all. However, you can make that point without downplaying the contribution of Arteta and he remains, I believe, an important part of the manager’s plans for this season.

So, overall another good day at Wembley, a ‘trophy’ to lift, and the feel-good factor that has surrounded the club since we lifted the FA Cup continues. Now though, it’s time to make the final preparations for the new season, on the training ground, in the manager’s office and in the transfer market. Six days until it all begins again, and it feels exciting.

Hopefully we’ll have an Arsecast Extra for you today, depending on a couple of things but fingers crossed. Keep an eye on Twitter for the call for questions – or an update as to when it’ll be.