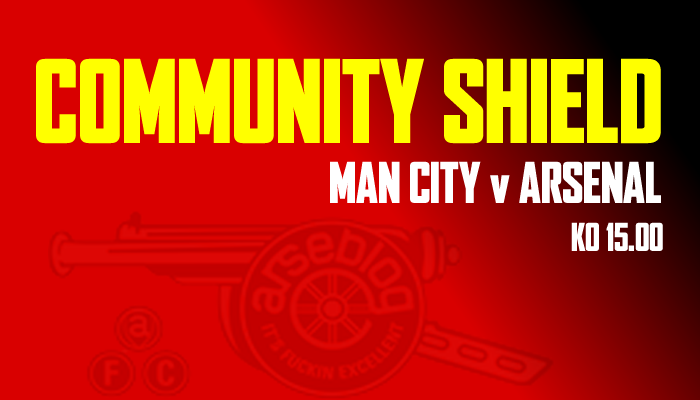 So, our final game of what feels like a rather truncated pre-season takes place today with the Community Shield against Man City at Wembley.

It’ll be a sterner test than previous games, but like ourselves, City have the issue of players who just aren’t ready yet. Manuel Pellegrini said there’d be no Sagna, no Zabaleta, Aguero, and others due to their World Cup endeavours, and we’re in much the same boat.

Last week Olivier Giroud was ‘not at all ready’ according to Arsene Wenger, so while another week of training will have helped, it’s hard to imagine he’ll be a starter. Laurent Koscielny must be in more or less a similar situation but I suspect our lack of central defenders will mean he plays. Then again, if we saw a Monreal/Chambers partnership in the middle I wouldn’t be at all surprised.

Players who have had a full pre-season, like Ramsey, Arteta, Szczesny, Gibbs, Flamini, Sanogo etc, are most likely to be involved, with Alexis rumoured to be starting up front. Anyway, we’ll see what kind of team we put out, but as I said during the week, as much as I’d like us to win this game, making sure we’re as ready as we can be for Crystal Palace next week is the most important thing.

However, today should be a good marker of where we are and what we need to do before the season starts. That we’re facing the champions is a challenge, obviously, and we do have something of a history with City in terms of selling them players who thought they were much better than they were for gigantic sums of cash, but whether that adds much in the way of rivalry is open to question.

Anyway, it’ll be interesting to see how we get on, especially at the back now that we’re quite obviously short a player ahead of the new season. As expected, Thomas Vermaelen has joined Barcelona which leaves a bit of a hole, as a quick look at our squad list on Arsenal.com shows: 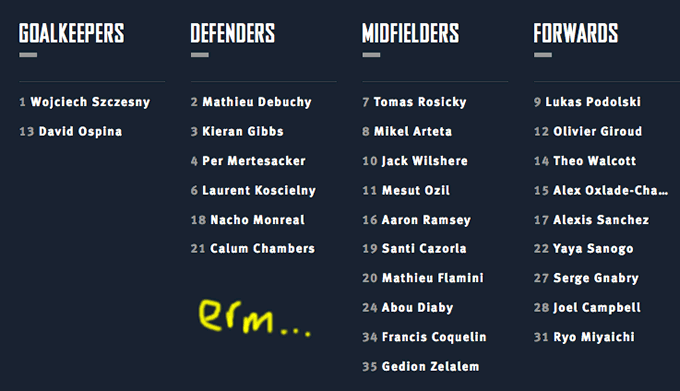 Two left backs, two right backs (one of whom can play centre-half but who the manager thinks is going to be a defensive midfielder), and two centre-halves is really not enough to get us through the opening month, let alone the entire season.

I’m a big fan of what we’ve done this summer. When gaps have needed to be filled we’ve done it well and without undo fuss or delay, so I’m hopeful that we’ll react in a similar fashion to Vermaelen’s departure (and let’s be clear: this isn’t a move which could have caught us by surprise in any way). The fact that we’re less than a week away from the new season does make the issue slightly more urgent though.

Elsewhere, some good stuff from Kieran Gibbs about new boy Alexis. He says:

Alexis is like an animal in training and on the pitch. He’s everywhere. He never stops running. That’s what we need. We can’t just sign a superstar and think we’re going to win everything. It’s about attitude as well.

It’s going to be very interesting to see how he adapts to life at Arsenal. No longer shackled by having to play second or third fiddle to Messi, he’ll have a freedom with us that he hasn’t enjoyed for a while, but also a responsibility as one of the team’s main men. I have to say though, it doesn’t look to me as if that will faze him in the slightest though.

Meanwhile, there’s a great piece from Amy Lawrence about Shad Forsythe and the impact he might have as the new Fitness Coach at the club. It also includes something from the manager about how he may not be the last to come in:

We are trying to be as good as we can everywhere. We might still bring somebody else in to be as accurate as possible and preventative as well. We can still improve in some departments to prepare better.

Perhaps it’s a case of better late than never, but it obviously suggests that the internal investigation that we carried out last season – something very much welcomed by staff and players, I’m told – highlighted some significant issues and we’re now addressing them. With the margins so tight at the very top level, keeping our best players as fit as possible might just be the difference between winning something and not this season. Fingers crossed.

We’ll have Community Shield match reports, reaction and player ratings over on Arseblog News later on, but the live blog doesn’t return until next week when things kick off properly.

Have a good one, and come on you reds (or maybe yellows).

An attempt to make myself feel better about stuff