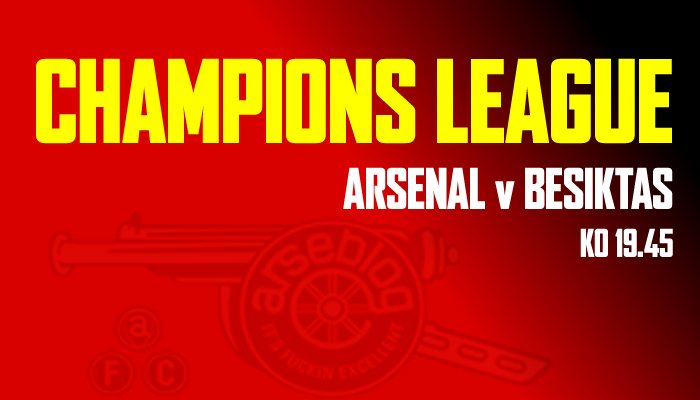 The preparation for a game of this magnitude (pop pop) could, let’s face it, have been better. We’re facing Besiktas tonight without our best centre-forward, without our best, and goalscoringest midfielder, and our captain who also happens to be our best deep-lying midfielder.

While for the last two there are obvious replacements, who plays up front tonight is going to give Arsene Wenger something of a headache. For me, there are only two options. Firstly, he goes like for like and plays Yaya Sanogo (assuming he’s fit); or secondly he has another go with Alexis as the striker – something he’s obviously keen to try as his selection against Everton on Saturday showed.

Sanogo would bring us some of the qualities of Giroud in terms of his style and size, acting as a focal point for the attack and tasked with holding it up and bringing others into play. The team certainly played better with that kind of player at Goodison Park. However, with all due respect to the younger of the Frenchman, Giroud has a track record of scoring goals. Perhaps not as many as we might like, but it’s inarguable.

He’s a more mature, more experienced, more developed player and the simple fact is that in the 16 games he’s played for us, Sanogo has yet to score. Of course it’s just 16 games, many of those appearances cameos from the bench, but to me it would be a massive risk to bank on tonight being the night he finally gets off the mark. There’s so much at stake this evening that to put that pressure on Sanogo is verging on unfair.

We know the manager has no compunction using him in big games. He made his debut in the FA Cup against Liverpool and then kept his place against Bayern in the Champions League. On both occasions he acquitted himself pretty well, but those selections were also borne out of circumstances at a time when Giroud hadn’t covered himself in glory off the field. There was more to it that just football.

I think the team needs as much quality and experience as it can get tonight, and that means continuing with Alexis up front. Maybe away from home against one of the best teams in the league wasn’t the place to try it first, but at home, in European competition seems like a much better fit – especially if he’s got the right support around him.

What I’d like to see is something like this: Szczesny – Debuchy – Mertesacker – Koscielny – Monreal – Flamini – Wilshere – Ozil – Cazorla – Oxlade-Chamberlain – Alexis

Moving Ozil back into the midfield where he can pull the strings, with Cazorla and Oxlade-Chamberlain either side of Alexis would be forward three that has plenty of movement and creativity, with Ozil playing in the position in which he’s best and most influential.

Although we didn’t really trouble Everton hugely in that first half, Oxlade-Chamberlain might have changed the complexion of the game completely if he had his shooting boots on, and he’s looked lively when he’s played this season. We know he’s got goals in him and I think he’d do well on that right hand side tonight.

The other options to play up front are less convincing. Joel Campbell is, to my mind, more of a wide forward, and one that’s still finding his feet at the club. To thrust him into this kind of action doesn’t seem sensible but he gives us something from the bench.

As too does Lukas Podolski, but again he’s not a candidate for a start. Let’s remember that 48 hours ago he was on the brink of leaving the club. The Giroud injury has forced the manager’s hand to an extent, but if he was willing to let him go it speaks to a fundamental lack of faith in the player. If we’re desperate for a goal later in the game he’s definitely nice to have on the bench, but even though Arsene says he’s ‘staying with us‘, I’m not 100% convinced he means in the long-term.

As for the rest, well it doesn’t need a whole lot of analysis. Our Champions League hopes rest on this game and it’s going to require a team performance of greater quality than anything we’ve seen this season so far. Besiktas are going to make life very difficult for us and have the advantage of away goals. If they score once, we’ve got to score twice. A draw works for them, it puts us out.

Hopefully having Mertesacker and Koscielny back together in the centre of defence will provide us the calm, authoritative platform we need to do the business. At the other end, it’s not as if we don’t have players who can score, create and make a decisive impact – it’s just that the team, as a whole, hasn’t really clicked yet this season.

Tonight would be the perfect night for that to happen.

Meanwhile, the Giroud news gets worse with the club now fearing he’ll be out until the new year. I really think a striking purchase is almost top priority for us now. Almost. From what I hear we’re looking for a central defender and a defensive midfielder, but surely this shifts our priorities somewhat.

The central defender is a must-have. There’s no question that we need to add depth in that area to get through the season, but would you then spend big on a striker or the midfielder? The dearth of genuinely top class options up front is the only real problem. There are lots of forwards on the same level as Giroud around, but realistically, not too many who would really kick us forward.

Could we get David Ospina to have a quiet word with that lad Falcao? The idea that we might pay £20m to take him on loan for a season are fanciful, there’s simply no way we’d spend that kind of money for that kind of deal, but how much would it take to sign him permanently (if he wasn’t already fixated on Real Madrid?).

Even with a fit Giroud, I’d have liked to see a forward come in during the summer. Without him, it feels like a necessity. Maybe the Alexis experiment will work and Theo Walcott is coming back soon. There’s Sanogo, Campbell and Podolski, but the issue isn’t one of numbers. We most certainly have the players who can fill in.

For me it’s a matter of quality and as yet two of the options are unproven, one of them was on his way out of the club (a decision taken by the manager which speaks volumes), while the two speedsters mentioned above are going to be effective against certain teams in certain situations, but not for every opposition.

Amy Lawrence writes a good piece in today’s Guardian about it, and I really think if we’re serious about challenging this season we should be out there trying to find the best forward we can between now and Monday night.

Remember, if you’re stuck in work later or can’t see the game for some other reason, you can follow it on our live blog. You get updates from first whistle to last, auto-refreshing on your computer, phone, tablet or any other Internet connected device.

Simply bookmark our default live blog page or check back here later on for a post with all the details.