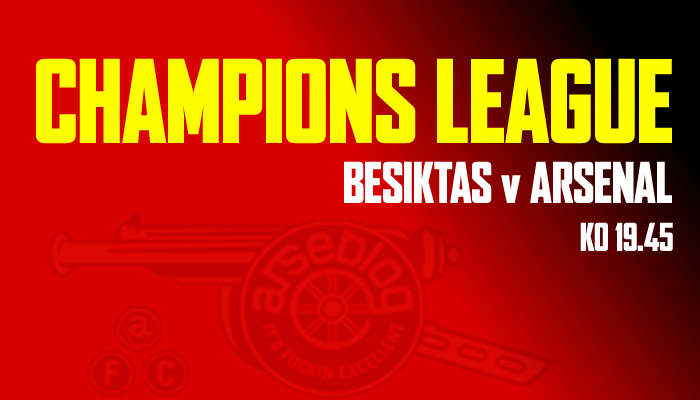 Champions League action tonight as we face Besiktas in the first leg of our qualifier.

The good news is that Laurent Koscielny was passed fit and made the journey, so you have to assume that he’s going to play. Per Mertesacker, however, did not travel and the earliest that we might see the Germans is for this weekend’s trip to Everton.

Kieran Gibbs is injured and Arsene Wenger expects the left-back to be sidelined for two or three weeks with a hamstring strain. Having pretty much established himself as the first choice last season, his absence opens the door for Nacho Monreal to give the manager a selection headache. While I think Gibbs is probably the better player overall, the Spaniard performed well against Palace on Saturday, and tends to be a bit more reliable in terms of his fitness.

It’ll be an interesting battle between them this season, but Gibbs is going to be 25 next month and he’s now at an age where he really needs to put the injuries behind him. A strain here, an ache there, and it means any manager would have to take into account the amount of games he misses. I think he’s got the potential to be a very good player, but he has to stay fit.

Yaya Sanogo also misses out with a hamstring strain but after the Palace display I don’t think he’d have played anyway. Olivier Giroud gave the team more balance when he came on and I think he’d have started tonight regardless. It also pushes Joel Campbell a little closer to his first real appearance for the club but for me question marks exist over both him and Sanogo and what they might contribute to our season.

The team is likely to be the same as the one that won on Saturday with those changes; Monreal for Gibbs and Giroud for Sanogo. Hector Bellerin is in the squad to provide some defensive cover but fingers crossed we don’t need to use him for any reason. The last thing we need is to lose another defender tonight. Mathieu Flamini is back in the squad after sitting out the weekend due to illness.

As for the game, Arsene Wenger has played down the financial reward for qualification, saying it’s all about being involved in the best European competition:

Financially it is a big game but it’s not that that’s the most important thing. We want to compete at the top level, we want to fight against the best in Europe and that’s the real target of the competition tomorrow.

Seems pretty obvious to me. The players want to play in the Champions League, and it’s clearly a big draw when you’re trying to do transfer business. That it’s essentially a pot of a gold isn’t irrelevant, obviously, but you can be rich as Croesus and struggle to do transfers if you’re not in it.

So it’s going to be a scrap, no doubt about it, and with Arsene Wenger warning about fatigue after the Palace game on Saturday, we’re going to have to dig in a bit tonight. We know they’ll make life as difficult as possible for us, but then that’s true of every team – and perhaps facing Palace, a team who did exactly that last weekend, will be good preparation.

Fingers crossed we can do the necessary later.

In other news, plucky little Chelsea managed to beat free-spending petro-giants Burnley last night. Quite how they managed that with a squad that cost barely tuppence-ha’apenny to put together is beyond me. Everyone loves the underdog. Except when the underdog think it’s a little horse but in reality it’s more Trojan than little and when you open it up it turns out it’s full of evil wasps who punch orphans in the face.

In conclusion: they can stick it.

If you didn’t get a chance to listen to yesterday’s Arsecast Extra, you can find it right here. On the agenda this week the Palace game, we try and figure out why, when it’s quite obvious we need a defender, we haven’t bought one yet; examine the shafting Jack Wilshere got; and discuss bird poo probably a little too much.

If you’re stuck in work and can’t see tonight’s game, fear not. Tom will be here with live blog coverage of it for you. Simply check back here later on for a post with all the details or bookmark our default live blog page and updates begin automatically.

It works on your computer, phone, tablet, smart watch, Google underpants or any other web connected device you might choose to use (probably).

Right that’s that, have a good one. More here later.