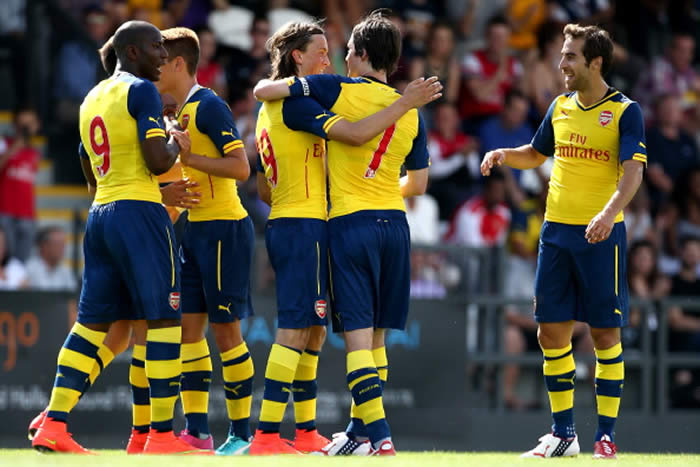 Quick Sunday round-up for you beginning with our first pre-season game against Boreham Wood yesterday. We won 2-0 with goals from Kristoffer Kris Kristoffersen Olsson and Benik Afobe. I didn’t see any of it but will watch the highlights here shortly, so the only comment I can make is that the new away kit looks rather lovely.

Anyway, there’s very little to be learned from pre-season friendlies, particularly the very first one, as they’re really only training exercises. From what I can see on the official site we played an entirely different XI in the second half from the first, and that tells you everything you need to know.

More interesting was what the manager had to say afterwards. As usual he was quite guarded on potential arrivals, refusing to be drawn when Khedira’s name was mentioned saying, “I can’t give you any names.” He confirmed that he’d be signing a goalkeeper of some description and probably a centre-half as he cast further doubt over the future of Thomas Vermaelen.

Questioned as to the captain’s role next season, he said:

I cannot guarantee he’ll stay, but should he go I will bring another centre-back in for sure.

I think if you read between the lines, there’s probably been an agreement between Wenger and Vermaelen that, because of his place in the central defensive pecking order, he’d be allowed to leave this summer if the right offer came in. Of course that offer is dependent on the circumstances being right for us, and for me that would mean signing a centre-half first and then letting him go.

Even still, as I wrote earlier in the week, I think it’s risky to go into a season with just three established central defenders. Perhaps they have high hopes for one of the youngsters like Isaac Hayden to add that depth to the squad, but I think I’d probably feel a bit more comfortable with some genuine experience. August is a busy, important month with Champions League qualifiers and with Mertesacker late back we need to get this sorted sooner rather than later.

As for Vermaelen, I can understand completely his desire to go and, to an extent, our willingness to let it happen. He’s definitely not a first choice player any more and with just 12 months left on his contract it’s a chance for us to add some cash to the coffers. The Manchester United rumours won’t go away and it wouldn’t surprise me one bit if that’s where he ends up.

As for how we replace him, well that’s a bridge we can cross when we come to it, but in basic terms I think we should be looking to sign somebody with the quality to play with Mertesacker and Koscielny (Vermaelen’s incompatibility with the Frenchman was a big part of why he’s spent so much time on the bench), but also compete with them properly for a place in the team. Nobody should be, or feel, completely assured of their position. It’s healthy for the squad.

The manager also had things to say about doing business early in the summer:

And our midfield options:

There’s big competition but there are many players with a lot of talent that didn’t play many games last year. Oxlade-Chamberlain was out for a long time, Wilshere was injured and Diaby was injured for the whole season. They are back now and it’s very difficult to predict how fit they will be at the beginning of the season. There’s a big competition in the middle of the park, yes.

Does that make it more or less likely that we’ll sign a midfielder? If you look at the sheer number of players in the squad list in that area, we’re extremely well covered so unless we’re planning on moving one or, even two, on, it’s more difficult to see us spending in this area than at the back, for example.

Wenger was also asked about Jack Wilshere and those photos from last week. He said:

I have to speak to him really to see what happens before I come out publicly.

Waiting to see what really happened before making a judgement? What kind of madness is this? He should be OUTRAGED immediately for it is a DISGRACE and rarrr blahhhh grrrrrr bad example raaarrrr Evil Wilshere makes babies cry and that. Grrrrrr.

Anyway, no doubt there’ll be plenty to get our teeth into this week and the next time the lads play will be in New York against the Red Bulls. Which should be fun for all kinds of reasons, more on that to come during the week.

For now, breakfast and I don’t have any bacon and godammit anyway. Till tomorrow.