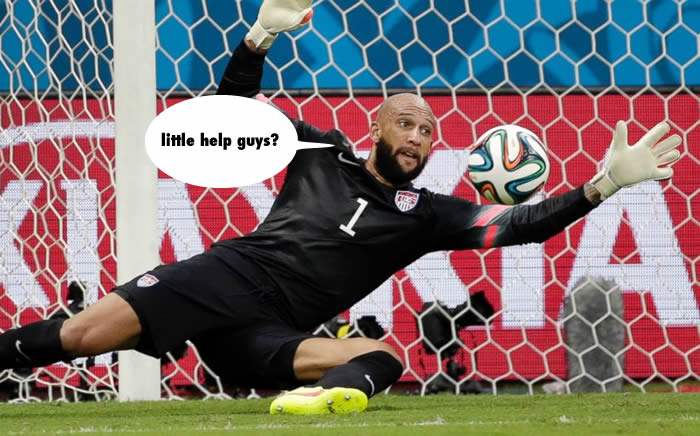 You know who I wouldn’t like to be this morning? Chris Wondolowski.

Because I wouldn’t have slept all night. The American had a glorious chance to send his team to the quarter-finals of the World Cup but ballooned his shot over the bar from close range and that miss is going to be like a tattoo on his brain for a long-time to come. A HD holographic replaying over and over and over again tattoo. Ouch.

It came after Belgium had created plenty of chances at the other end but found Tim Howard in sensational form. The Everton keeper made a string of very good saves. When the goalkeeper wasn’t required the defending, and commitment to defending, was absolutely fantastic to watch. As I’ve mentioned before, I’ve thoroughly enjoyed watching this American team because while there are obviously shortfalls in quality on an individual level, the way they performed as a team has been great to see.

In extra-time, with legs tired, the introduction of Lukaku made the difference. He’d been unceremoniously dropped because of the paucity of his performances, and his replacement, Divock Origi looked far more interested if a bit raw at times. But Lukaku’s power brought about the opener for Kevin De Bruyne who, remarkably, is 23 years of age. If I owned an off-licence I wouldn’t even believe that if he showed me his passport. He’s just so young looking, but his finish was excellent.

He then turned provider for Lukaku, sending him down the inside channel and his first time finish past Howard was really very good. Julian Green got one back for the US right at the start of the second half of extra-time, and they almost scored again shortly afterwards but Jones’ hooked effort went just wide.

In the end they couldn’t find the goal that would bring them to penalties, but it was a gallant effort all the same. It also looks as if this World Cup has captured the imagination of the American public in a big way, and when you see more established nations struggle to make the best out of ‘world class’ players, to see a group whose collective spirit and willingness to work to make up the difference should be a lesson to some of them.

Of course they’re not alone in that, but it’s an illustration that organisation and a system that creates something greater than the sum of its parts can be effective. If this pushes the game forward a bit more, and they can develop players who can come to Europe, playing regularly in the game’s best leagues, then there’s no reason why they can’t do more next time.

I don’t know the details, but some people on Twitter suggested to me that there are issues in the way the game/national team is run in America, but that’s often true in every country. From the outside, it looks as if the USA have made genuine progress and they deserve credit for that without the tired ‘touchdown’ / ‘Superbowl’ tropes that accompany every match and discussion.

In the other game Argentina huffed and puffed against Switzerland in a game which really highlighted the shortcomings on both sides. I thought the Swiss defended well, Johan Djourou had a good game, but up front they had little to trouble an opposition defence which really isn’t up to much.

One time Arsenal target Josip Drmic tried to chip the keeper but failed miserably to do so, while Argentina’s much lauded attack found it very tough to break down the Switzerland defence. The game went to extra-time, we were minutes away from the excitement of a penalty shoot-out, then Messi burst into life. He ran at the Swiss defence, played it out wide Angel di Maria – who had been abysmal for the entire game – and the winger’s left footed effort wrong-footed the keeper to make it 1-0.

It really should have been 1-1 moments later though, as Dzemaili hit the post with a header and then stumbled the rebound wide of the post. Whatever about the second attempt, he should have scored with the first and it would have been hard to argue that they didn’t deserve it based on the game overall.  Once more though Argentina were thoroughly unconvincing but as long as they have Messi in the team, a man who can just provide that one moment to turn a game, you can’t write them off.

So, the quarter-final line-up is complete. We have a couple of days without football now (booooo!), and then it’s:

It’s been notable just how tight the first knock-out games have been with five of the eight going to extra-time. With no obvious favourite it might be even more cagey in this group of games. My suspicion is that the winner will come from France/Germany game, but then the unpredictability of this World Cup has been one of its great joys, so I’m happy enough to just sit back and see what happens.

With regard to Arsenal news, there are a few little bits happening. Firstly Mikel Arteta’s agent has ruled out the possibility of him leaving the club this summer. He’d been linked with a move to Athletic Bilbao but even if we bring in a new midfielder to compete for his position, I can’t see the manager letting him go. He’s an important figure and the benefit of experience and some continuity is not something we should overlook.

Ignasi Miquel is being linked with a move back to Spain, which isn’t a surprise really. He’s still just 21 but having failed to make a real impact during his loan spell at Leicester last season it wouldn’t shock me to see him move on this summer. However, it does highlight how short we are at centre-half, and I do hope that’s something Arsene and his scouts have been working on. Beyond that there’s nothing new really, beyond the same spurious stuff you can find if you go digging.

Myself and James will be recording an Arsecast Extra around lunchtime today, so if you’ve got questions for us, send them to @gunnerblog and @arseblog using the hashtag #arsecastextra. That should be available to you mid-afternoon.