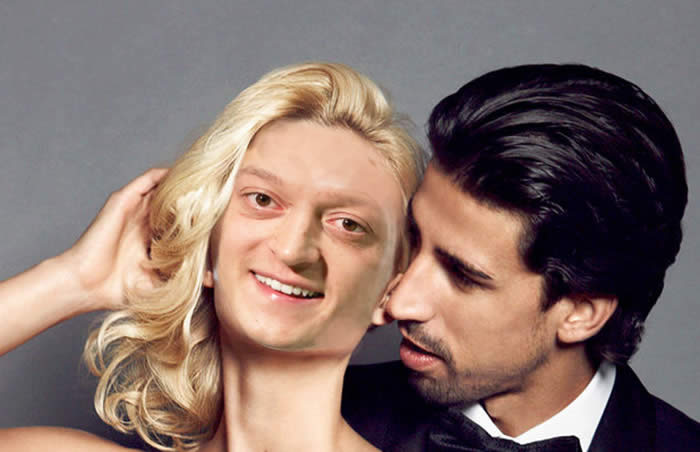 So, the World Cup ends and the transfer speculation increases. I’m sure the two things aren’t connected. Just coincidence, that’s all.

The big story yesterday was that Sport in Spain wrote a piece about how Sami Khedira to Arsenal was more or less a done deal. All that needed to be done was everything and that, but it was still as close as it gets with the German ready to sign a four year deal with us.

Perhaps this signifies a new tactic from Arsene Wenger. Out goes the Young – French – A Bit Injured triumvirate and in comes Expensive – German – er … A Bit Injured. Khedira played just 13 league games for Real Madrid last season due a torn ACL but did make it back in time to play in the World Cup. Perhaps he rushed things a bit though as a dodgy calf ruled him out of the final.

Anyway, he’s a 6’2 midfielder who would certainly add some physical presence to the centre of the park, but isn’t the archetypal DM many believe the squad needs. However, he is a very good player and if Arsene Wenger can make an effective anchorman (I love lamp) out of Mikel Arteta, perhaps he has plans to do something similar with Khedira. That’s if reports are to be believed.

Khedira’s best friend in the whole wide world though is Mesut Ozil and it’s clear he wants out of Madrid, especially with Toni Kroos about to sign for them, so it would be surprising if there wasn’t something to this story. He’s already in with the in crowd, as you can see.

Reports suggest wages are an issue but aren’t they always? The thing is, when you buy players from Real Madrid, the chances are they’ve become accustomed a salary level which may not fit exactly with ours, yet with the signings of Sanchez and Ozil we’ve assuredly gone beyond the level we used to operate at so I can’t imagine it’d be a killer issue unless his demands are thoroughly ridiculous.

There’s still talk that we’re keeping tabs on Lars Bender Bending Rodríguez from Bayer Leverkusen but it’s very difficult to imagine us signing two midfielders. If we do,  it surely means that somebody is going. Which is why I think we won’t.

Bender would be the more conventional fit in terms of adding defensive steel to the midfield but Khedira could go round Mesut’s house and play Atari and keep him happy. On such little details are multi-million transfer deals decided. Anyway, what a choice to have to make: Khedira or Bender. We’ve come a long way from deciding between Jaques Cassé and Sven Kneesplat on a free from FC Tuba.

Meanwhile, the goalkeeping roundabout keeps on turning and it’s Colombian David Ospina who is being linked with a €4m move from Nice. Local papers there are saying a deal is in place for him to make the journey to London. It seems he’s got just 12 months left on his contract and no intention of renewing, so for the French club it would make sense to sell him this summer.

He’s 25, did well in the World Cup, and his brother-in-law is one James ‘Ham-ez’ Rodriguez (no relation to Bender), so that’ll come in handy when we try and prise him from Monaco next summer. I kid, he’ll be at Real Madrid by then (Spanish press reporting ‘agreement’ already on that one). But he’s at an age where he’d definitely provide real competition for Wojciech Szczesny and that’d be a good thing for both players.

Szczesny has always performed best when he’s had some pressure on him, and signing a player like Ospina rather than some journeyman veteran to provide a bit of cover here and there would keep him on his toes in a big way. One of those where we’ll wait and see, I guess, but he ticks many of the boxes and would be a much better option than Pierre sans les Mains.

With Arsene due back from Brazil imminently, if he’s not already, things should really get moving now in terms of our business. Especially as we’ve got our first game of pre-season on Saturday as we take on Boreham Wood with what looks like it’ll be a relatively strong side.

And with the new season not far away, Sky and the cretins at BT Sport have published their list of televised fixtures. A number of Arsenal games have been changed for broadcast purposes – you can find the full list here. Most obvious is our opening day fixture against Crystal Palace which has been shifted to 17.30 for Sky Sports. An extra couple of hours of beer on a Saturday afternoon in August? Sounds awful. Count me in.

Right, that’s about that for this morning. James and I will be recording the Arsecast Extra in a little while. If you’ve got questions for us to get our teeth into (in a nice, not Suarez-y way), simply fire them to us on Twitter @gunnerblog and @arseblog with the hashtag #arsecastextra.

Obviously we can’t get to them all every week but really appreciate all the interaction. The podcast will be available mid-morning for all your aural pleasure, more here tomorrow.