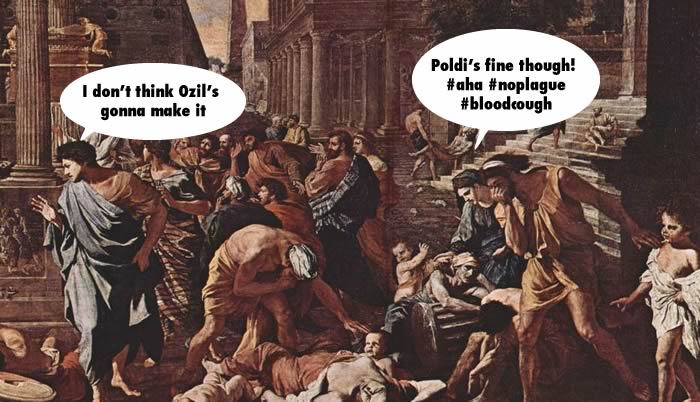 Happy Friday to you all and it’s a big welcome back to the World Cup today.

This evening we’ve got the rather tasty prospect of France v Germany. I can’t say I’m especially up for one team over the other, but Germany have three Arsenal players (Mertesacker, Ozil and Podolski), while France have one (Giroud) who probably won’t start the game. Update: Ooops, forgot Laurent. Sorry Kos.

Our French connection could well be bolstered by Mathieu Debuchy who more and more feels like exactly the kind of signing we’d make at right back, but for now he’s a Newcastle player and therefore under the charge of Alain Pardieux. I guess Arsene Wenger will be commentating on this game for French TV tonight, so keep an eye on Twitter for any remarks he might make that give us an insight into possible transfer market action.

“At the moment we haven’t signed anyone … *cough sanchez cough* … but as soon as we do … *cough debuchy* … we’ll let you know …*cough kalou kalou!*”

There are some headlines about German players suffering with ‘flu’ but coach Joachim Löw said:

One third of our team were complaining about a sore throat. All players were able to train.They still have a slight cold but there’s no feeling of exhaustion. I hope that we do not have any worsening overnight.

There is a marked difference between a sore throat and a bit of a cold, and flu. If they had flu they wouldn’t be able to stand up, let alone train, but I suppose facts never get in the way of a good headline. There’s just no integrity these days …

I bet Ozil is one of the sick ones though. He looks like he’s very susceptible to germs and I bet there are people over there who cough and sneeze and never put their hand over their mouth so you have to walk through a cloud of their cough and sneeze.

I hate people that do that. I sometimes wish I had the ability to stop time so that when they coughed into the atmosphere at mouth level I could bring things to a halt, turn them around, dress them in a Little Bo-Peep costume with a sign saying ‘I AM A DISGUSTING PIG’ and start things up again. Only the monumentally thick amongst them wouldn’t figure out the correlation between their filthy ways and the humiliation and confusion.

Anyway, France v Germany promises to be a good game, and as I said the other day, it wouldn’t surprise me at all if the team that won this was the team that went on to win the tournament.

Then, later is Brazil v Colombia. The pedestrian, unexciting hosts against James ‘Ham-ez’ Rodgriguez, my favourite player at the World Cup so far. I noticed a story about him yesterday saying he wouldn’t like to play in the Premier League because it’s ‘too physical’, but let’s be real about this. When you’re so good at football that you can choose to play for the best clubs in the warmest countries then why go to somewhere winter lasts 7 months of the year?

If I were a professional footballer, I’d definitely consider the climate before I signed any deals. Accustomed as I am to freezing cold and rain and mud and ice and sometimes playing in hailstones and getting a hailstone in the eyeball, it’s just much better playing in the sunshine. I loved my days playing in Barcelona (despite the fact the pitches were made of hard clay and stones and gave me shin-splints that were more painful than listening to Mark Lawrenson and Stewart Robson co-commentate on your life 24 hours a day), so I can see why it’s a factor for others.

Just look at Carlos Vela, for example. In the cold of England he was kinda crap. Stick him somewhere warm, his bones heat up and he scores and assists like an actual good footballer. Bring him back to England, his output would diminish considerably. Put him back in the warm, BAM. Golazos and assistencias galore. Sometimes it’s just all about the weather.

None of which gives us much insight into today’s game. Both teams should feel comfortable. The weather tonight looks grand with a temperature of 68° predicted for kick-off time, with humidity at 75%. Wind north/north-east, variable, 5mph. Visibility: good. Gale warnings have been issues for coastal areas off the Irish Sea, but that’s not relevant to the World Cup.

My predictions: Germany to beat France by a single goal, Colombia to shock Brazil with a two goal win and Scolari will rip Fred’s moustache off his face in frustration. If you fancy a flutter, Paddy Power are offering new accounts a rather tasty 12/1 for Colombia to win, click here to have a go at that if you fancy.

Arsenal news? Pffff, what are you on about? Enjoy the football later.