I played football for the first time in three weeks last night (due to injury), and man, am I aching this morning. The bit where I was injured is fine, but all the other bits seem to hurt quite a lot. Luckily for me I’ve hired a new fitness coach for this season. Dr Woodford will ensure that I’ve got plenty in reserve for the rest of the season, I’m sure.

Right, onto Arsenal things and this morning’s Marca is running the following story: 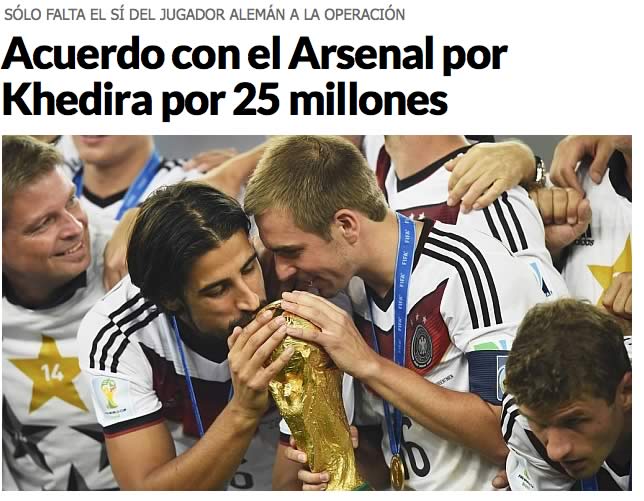 Basically, that says: Agreement with Arsenal for Khedira for €25m. And the line above says ‘It only lacks a ‘yes’ from the German player’. They say that he’s asking for a salary of €7m per year which, if you break it down, is about €134,000 per week and if you convert that to sterling comes in at around £106,000. Certainly within our price range, assuming we’re talking gross salary here.

However, the article quite clearly says that this is what he’s looking for ‘netos’ (net), so what the implications of paying somebody £106,000 a week are after tax are very different. I’m no accountant but I’ve worked out that it means having to pay him a ‘shitload’ more to get that figure net.

If there’s likely to be a hold-up to this deal then I suspect that’s where it is. It looks as if the clubs have found a middle ground, now it’s down to the player to and his agent to agree to terms acceptable to both them and to Arsenal.

At the German World Cup celebrations, it seems that Lukas Podolski, ever the japester, shouted out ‘Arsenal!’ when Khedira was being asked about his future yesterday. I don’t understand German so it could have just been Podolski shouting that randomly anyway.

However, I like to think that we’re using him as a tool to help bring players to the club. Imagine Alexis Sanchez, in his hotel room after going out of the World Cup to Brazil on penalties. He shrugs off his shirt, his socks, thinks about going for a lie down. He picks up his book to read to help make his eyes heavy and to take his mind off the penalty shoot-out heartbreak.

It’s hard, every time he closes his eyes he can see Julio Cesar make a save that denies his team the dream, but soon he’s drifting off. Slowly, slowly, sleep is coming. Then, from out of the linen basket, up pops Podolski:

Sanchez bolts upright, Lukas snaps a selfie with him, blurts out ‘ARSENAL!’ again follows the Chilean around, randomly shouting the name of our club, until he says ‘Ok, ok. I’ll sign. Just shut up!’. The noise in the Khedira household must be terrible right now.

Anyway, I suspect if we can reach agreement with Sanchez and Ozil it won’t be impossible for us to do likewise with Khedira. Also, if there are some concerns about his fitness record, I wonder have we had any input from Shad Forsythe, fitness guru for the German side who is, according to well-placed reports, due to start his new career with us very shortly.

Meanwhile, Theo Walcott has updated on his injury, saying:

The knee is going really well. I am doing some good stuff with the physios and fitness coaches and we have worked really hard throughout the summer. The most important thing is getting the strength back and it has pretty much nearly healed – it is.

Given the injury occurred in January, we could be looking at a late September/early October return, assuming everything continues to go well. The arrival of Sanchez means we don’t have to rush anything though, and speaking of which, Theo touched on what both of them in the side could do, saying:

With me and him on the flanks, a lot of teams won’t be looking forward to playing Arsenal this year!

Whether Sanchez is designated the flanks in the long-term remains to be seen, but the idea of Walcott and Sanchez together is a genuinely exciting one. The threat of pace is one that does affect the way an opposition side sets up or comes at you, and we haven’t had much of that in the last 6 months, so it’s something to look forward to.

On yesterday’s Arsecast Extra, James and I discuss how the Chilean might forge his role in the team over the course of the season, along with lots of stuff about Jack Wilshere, Khedira, Vermaelen and you can find out exactly how up for world peace my podcasting colleague is (hint: it’s quite a lot). Check it out here if you haven’t already.

News throughout the day on Arseblog News, more here tomorrow. Have a good one.