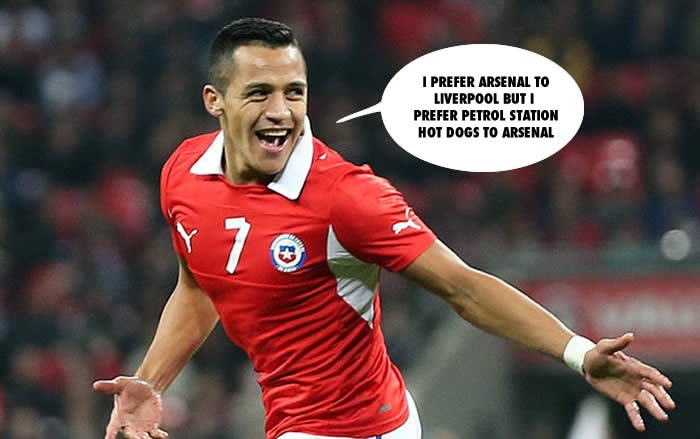 Is it wrong to get World Cup withdrawal symptoms after just one day? Thankfully just one more to go and we’ve got some football again.

In the meantime there’s little concrete going on from an Arsenal point of view. Reports that Arsenal have agreed a fee with Barcelona ought to be taken with a hefty pinch of salt as they come from a guy with a worse track record than Devon Loch. The same guy who said Ozil had his Arsenal pictures taken shortly before the official Arsenal photographer made a complete lie of that.

It’s an interesting one though. Everyone’s gone big on Sanchez and obviously there’s a suggestion Liverpool want in on that action too due to their dealings with Barcelona over Luis Suarez. By the way, am I the only one absolutely flummoxed by the Catalan’s desire to sign him?

They’ve got one centre-half worth talking about, they’ve let Fabregas go, Xavi is about to leave to play in Qatar, Alex Song is closer than ever to the first team, and they already have Lionel Messi and Neymar to score their goals, so why are they so determined to sign a bloke who is more trouble than he’s worth when it comes right down to it? Especially as they’re going to blow a massive hole in their budget which could probably be better spent elsewhere.

I mean, they can do what they want, and if that means Sanchez becomes surplus to requirements and more available to us then fine, but it’s still hard to find method in their madness. There’s very little in the Spanish press about it this morning, they’re focused on Suarez, but the other day I was browsing El Mundo and came across an article with an interesting headline but the first line was: “Según el portal futbolístico goal.com …”

This means: “According to football website goal.com …” which meant I stopped reading because it was obviously absolute bollocks. It just shows you the circle of shite that exists around these kinds of stories at this time of year. I suspect, and I hope, that we do have some interest in Sanchez, but I don’t think anybody really knows anything concrete yet.

It’s why you get these stories about how he prefers Arsenal to Liverpool, or vice versa, because nobody can really disprove them and nobody’s really putting anything on the line by saying that. You can always trot out a line about how quickly things change in transfers, which is true in fairness, but it’s a handy out. Keep things vague and you’re never really wrong. Unless, if course, Ozil didn’t have his pictures taken. Which he didn’t.

Meanwhile, the agent of Joel Campbell has been talking about his post-World Cup future, saying:

His future at Arsenal is to be assessed after the World Cup. Are Italian teams interested? Yes. There are several clubs who are in the top band that have made enquiries about the boy.

We are talking about a great player here, who has captured everyone’s attention. Milan? There hasn’t been anything concrete from them.

Despite the clamour to bring him back, and fully accepting that he would offer more to the squad than Bendtner, Sanogo and Miyaichi, for example, I still think it’s a relatively complicated situation. Especially as the aforementioned players contributed very little to last season really and to better their output is a fairly low hurdle to get over.

If we buy the big name forward we all want, it makes Campbell’s path to first team football even more obstructed. Imagine that it’s Sanchez, somebody who can play wide as well as centrally, then that’s a £30m player in his way and I think we know who’s going to get the nod most of the time. I do think he’d add some depth to the squad, but he’d be competing with Walcott, Cazorla, Podolski, Oxlade-Chamberlain, as well as Giroud (who is going nowhere), and whoever the new man is.

After three years of playing first team football, is the player going to be content with sitting on the bench more often than he’s been used to? With his stock very high, he might even see this summer as the perfect chance for him to make a move to a club where his position/salary would be greater than at Arsenal, and I wouldn’t rule out the possibility of him looking for a transfer.

I don’t think it’s as simple as ‘bring him back, and play him when others are injured’, as others have suggested. I’d be quite happy to have him in the squad, but I still wonder what kind of a role Arsene Wenger envisages for him, and what kind of assurances he can give him about how much he’ll play. It’s difficult to go from being a first team regular to warming the bench, and I do think that might be a factor.

Obviously all eyes will be on him during the World Cup quarter-final. Having started the tournament very brightly, he’s faded a bit as things have gone on, so it’ll be interesting to see how he gets on against Holland on Saturday night.

Finally for today, there’s some World Cup and Arsenal listening for you in this week’s Arsecast Extra. Gunnerblog and I discuss Luis Suarez, the USA, transfer rumours involving Mathieu Debuchy, our transfer policy this summer, what kind of a dog Arsene Wenger would be, and whether or not we should hire Sandra Bullock as physio. Check it out here.