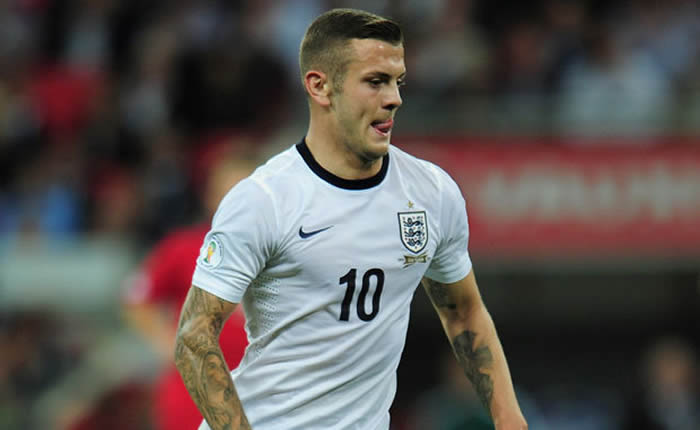 I’m having World Cup dreams now. Roy Hodgson was lambasted in the English press for picking Frank Lampard and a spider in midfield for their final game.

Funnily enough, the issue that the press had with the spider wasn’t that it was a spider, it was that it was a hair-stylist and not a professional footballer. It was a pretty big arachnid too, so could definitely have added some poison and webs and possibly fangs to the midfield, but such was the outcry that Hodgson relented and played former goalkeeper Joe Corrigan instead. I don’t remember how the game played out, as I was then driving a taxi up the side of a castle due to new technology, but I don’t think it went well for England.

Speaking of Roy Hodgson though, he’s confirmed that Jack Wilshere and Ross Barkley will start in the centre of midfield against Costa Rica this afternoon. He said:

I’m looking for them to show their talent. Both of them are very good passers of the ball, very good at running with the ball. Both, for young players, have good vision for the game. That will improve the more games they play, but they’re well advanced for their age.

Far be it for me criticise, and I do realise hindsight is a wonderful thing, but those sound like exactly the qualities England could have used before they went out. I think Wilshere was unlucky not to feature more and I hope he has a good game today. With Gerrard and Lampard surely on their way out (although both seem reluctant to accept the inevitable in terms of their international careers), Hodgson really does need to look to the future and the sooner these players become regular in the team the better for them and England in the longer-term.

It’s an interesting night in that group as Costa Rica are already through, so the game between Uruguay and Italy is a winner take all affair. Or a draw take all if you’re Italy because Uruguay have to win to qualify. You’d like to think Italy’s defenders will be much less inclined than England’s to let Luis Suarez do whatever he likes, so it might be a tight affair. One to look forward to, that’s for sure.

While we’re on the subject of Suarez though, the man has shown his true colours again by creating an issue out of nothing which is all part of his summer ritual to leave Liverpool. After his Guardian front page and interview last year in which he declared he wanted to leave Anfield, he’s going about it the old fashioned way this time. Death by a thousand press cuts, so to speak.

His father-in-law has already briefed the media that now would be a good time for him to go to Spain, and Suarez’s remarks about how the goals against England were because people ‘laughed at his attitude’ are as transparent as they are pathetic. I have to say, it’s rare in my footballing lifetime that a player bites another player, racially abuses another, and then gets awarded all the football writers awards.

The willingness to overlook the bad things because the football is good is, historically, one of the foundations of the game. Ultimately people will forgive you anything if you bang in a few goals, so having done that remarkably well – and kept his nose clean in the process – Suarez was granted that immunity by the vast majority of the press. Now he’s suggesting he was given a hard time and that’s why he wants a transfer? What bollocks.

There’s no doubting his quality as a footballer but he’s also a fairly reprehensible person. No doubt this will open up the debate about us and him and £40,000,001 again, but I think what’s patently obvious is that he would have no compunction doing to us what he’s doing to Liverpool, and wherever he ends up, he’ll do it there too.

Does his footballing ability make that trouble worth putting up with? It seems that it does, if managers like Arsene Wenger and clubs like Real Madrid and Barcelona seem willing to deal with it, but from a fan’s point of view, being put through the mill by a player every summer seems like something of a chore. Still, kudos to Liverpool for planning ahead and bringing in Rickie Lambert to replace him. Like for like, I’d say.

Yesterday’s games saw Brazil spank Cameroon 4-1 (even Fred scored!), while Mexico joined them in the last 16 with a 3-1 win over Croatia (couldn’t find that one on TV unfortunately). Earlier in the day Holland won 2-0 against Chile but the South Americans are also through, which gives us more chances to look at Alexis Sanchez.

The more I see of him in this World Cup the more I’m convinced he’d be a fantastic addition to our squad. Especially when you see his scuff corner after corner to the near post. He might as well be wearing a gigantic hat which says ‘LOOK ARSENE! I DO WHAT YOU DO!’.

The late games tonight are Japan v Colombia (more James Rodriguez please) and Greece v Ivory Coast, and it’s still possible for the other three teams to qualify alongside Colombia, which does make things a bit interesting.

In some vaguely Arsenal news, Olivier Giroud has revealed that Arsene Wenger wants him to be a bit more foxy on the pitch. Not foxy like a dame that walks into Philip Marlowe’s office, but more wily and sly:

He wants me to make smarter runs. One day Wenger told me I’m too honest in my running, too predictable. I need to be more sly, tricky. I’m getting there.

It’s really just as simple as telling a defender you’re going to run one way then going the other. Then when he twigs that cunning plan, you do the opposite, leaving them with no clue what you’re going to do. Quite simple. I’m sure he’ll get it sorted ahead of the new season.

All going well we’ll have an Arsecast Extra for you this morning, so keep your ears and eyes out for that.