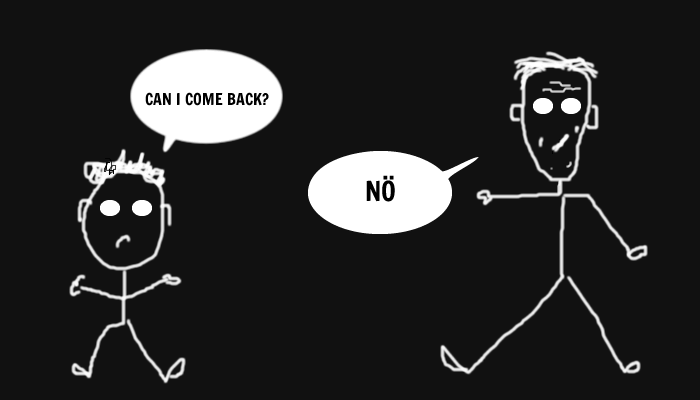 So, Cesc has signed for Chelsea and in the process confirmed what we knew last week – that Arsenal and Arsene Wenger decided against exercising the option which gave us first refusal.

On a visceral level it’s pretty disgusting, but for me I think it’s more about where he’s gone rather than us not getting him. Had he signed for Juventus this summer, for example, it wouldn’t really have bothered me as much. I’d still have taken him back, I think there’s always room for top class players in your squad, but if this was a random player called Sneck Babblepass, I don’t believe the reaction would anywhere near as strong.

Of course, why would it be? Cesc was an Arsenal player for 8 years before he went to Barcelona and a favourite of many. Some people didn’t like the way he ‘forced’ a move away, but the reality is that’s how a lot of transfers happen. They just don’t register on the scale as much. Arsenal were just as culpable that summer, nobody can tell me the way we handled that piece of business was anything other than half-arsed, but look, it was done and dusted and he was going home.

That he wanted to come back to us is not in dispute either. He would have jumped at the chance to join us again but the manager didn’t want him and he was made aware of that some time ago. Chelsea let Lampard go, took their chance and got a world class player for a knock-down fee. Before the World Cup and everything, which is why I think there’s further dissatisfaction. A rival takes a player who many of us have a strong emotional connection to, and they do so with an alacrity and decisiveness that’s too often lacking from our transfer business. It’s easy enough to understand why people are annoyed.

Yet, despite what you or I might have done had we been charged with the decision making, I suppose the right way to analyse this is to try and look at it from the manager’s point of view. Firstly, what are his priorities in the transfer window this summer? I’m guessing but I’d say it’s something like:

I don’t think the first three can be argued with, the only thing that might cause debate is what kind of midfielder we might be looking at. Do we genuinely need a creative, attacking midfielder? I suspect the key impediment to bringing Cesc back was the presence of Mesut Ozil. Having paid £42.5m for the German last summer, it would seem odd to bring in another player who plays in exactly the same position and around whom you would, normally, build your team.

I think Ozil will be the fulcrum of this Arsenal side next season from an attacking sense, and I reckon that, more than anything, is what informed his decision about Cesc. The other thing is that in terms of midfielders who can also fill that role, we’re pretty well stocked with Santi Cazorla (who has just signed a new deal), Aaron Ramsey, Jack Wilshere, Tomas Rosicky and Alex Oxlade-Chamberlain.

I mentioned the other day about having to give Oxlade-Chamberlain in particular room in the squad to develop. I’m a firm believer in the cream rising to the top, but if you never give the cream a game it will end up as a badly thought out metaphor and end up nowhere.

If there’s a real need for a midfielder, I believe it’s one further back who can do the job that Arteta does and that the manager sometimes feels like he can use Flamini for. I think the Spaniard is still going to be an important part of the squad, but he’s not getting any younger so a purchase there, allowing the new player to work alongside Arteta in a period of transition almost, seems more like what we need.

Some have suggested we should play Cesc there, but that’s not his game. I’m sure he could do a job but if you complain about a lack of pace and physicality with Arteta, then he hardly solves those issues. So, while I’d have loved to see Cesc back with us, and regular readers will know how much I think of him as a footballer, I can understand why the manager made his decision.

That it strengthened a rival is consequence of that, but what’s more important is what we do in the market. Our first job is to make ourselves stronger in the key positions, and we can’t really worry too much about what others do. That said, in order to make this a decision he doesn’t regret then the the purchases he makes really have to be ones that drive the team forward and do add the quality and depth we need to challenge over the course of a season. Especially as it’s going to be a stronger, more difficult title race next season.

There’s still plenty of time for us to do that, but understandably people are more anxious than they were to see us flex our transfer muscles. Ultimately though, Cesc is where he is because of Cesc. He made the decisions. He left Arsenal, went to Barcelona, things didn’t work out, and by the time he was available again, we’d moved on. It hurts all right, but that’s just the way it goes. Now he has to be touched by Mourinho’s gouging finger and John Terry. Life takes you down some strange roads, so it does.

Speaking of Barcelona though, they’ve hardly covered themselves in glory over this whole thing. Institutionally, between executives and players, they ran an orchestrated campaign for around two years to unsettle Cesc at Arsenal. How often did we hear about his ‘Barca DNA’? He had a Barcelona shirt foisted on him at a celebration for Spain winning the World Cup for goodness sake.

That it was a former Barcelona player, Pepe Reina, cloaked with Mugsmasher neutrality, who did it was no coincidence, I’m sure, and in the end they got what they wanted. I suspect some of their motivation was to show Arsenal they could do it and take back a player we’d ‘pinched’ from them at an early age. The reality was that he was given a chance at Arsenal that he would never have had there, but it still rankled with them, and their smug, graceless manner was evident in every conversation, and every mention of him before and after the deal had been done.

Three years later they don’t care about his DNA and discarded him with a statement so lacking in class and basic manners it’s a wonder why this club is lauded worldwide. We’re all used to clubs wishing former players well as they sell them on, but check this out from the official Barcelona website yesterday. Amidst the usual goodbye waffle, they posted:

But despite glowing starts to each campaign, Cesc’s contributions to the cause gradually decreased as each season drew to a close. From being someone who joined in with the attack, supplying and scoring goals, the magic tended to fade later on in each season. He only scored one, six and one goals in the last 24 games of each season. For some reason, he was never as good in the second half of a season as in the first.

That has since been deleted – and rightly so – but that it was there in the first place is an appalling indictment of how they think and operate. And you know what? The very first thought I had after reading it was that somehow other all the other Barcelona players had more energy in the second half of seasons for some reason and Cesc didn’t. I wonder what that might have been. Maybe we could get Lance Armstrong PI to investigate. Could that also be part of why they’re happy to let him go?

Anyway, it’s all done and dusted now. There’s nothing much at all can do about it, other than to hope that the manager’s decision is based on an actual, concrete plan and one that is going to put in place over the course of the summer to make us genuinely competitive next season. Because this is a scab that won’t take much scratching to start bleeding again.

Elsewhere, Bacary Sagna said an emotional goodbye via Instagram. No surprise, obviously, and it won’t be a surprise to see him line-up for Man City next season. At least we’ll know where Joe Hart’s goal kicks are going to go. Time for Gibbs to practice his heading.

ps – World Cup – that ref … ooff. Never a penalty. Neymar could have had red. Disallowed goal should have stood. It wasn’t boring, at least!