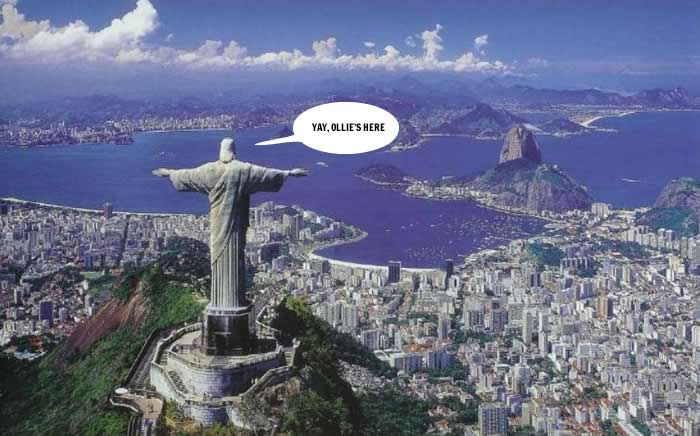 The build-up for the World Cup has started in earnest with every single journalist in the world Tweeting or Instagramming pictures of the beach to make sure we know they’re in Brazil.

Yeah, well you know who else loved Rio? Duran Duran. So you all love Duran Duran while the rest of us are cool and listen to the Specials and Classix Nouveau and that. You have posters of Simon le Bon on your wall. I shouldn’t be so dismissive of the 80s though – what a magical time that was for music and people who wanted to be in bands.

There was simply no impediment to success. Can’t play an instrument? So what. Can’t sing? Who cares. I mean, I know lots of them can’t sing these days but at least they have computers to make them sound as if they nearly can. When you listen to some 80s tunes now it’s quite astonishing just how tuneless many of them were. Yet somehow they convinced record company executives to let them into recording studios to shout, warble, bleat, screech and wail into a microphone and half the time they had a hit. Genius really, when you think about it.

Anyway, I digress. They’re all over there and we’re all over here [for here read: wherever you are] and it’s all kicking off in a couple of days time. There are some good opening round games too. Spain v Holland, a bit of a grudge match that and maybe Arjen Robben will be of a mind to make up for the fact he bottled the final last time around. Either that or he’ll dive all over the place and pretend to be really, really hurt when he’s barely touched by somebody, the reverse Dorian Gray looking gleet-hound.

England v Italy looks fun on Saturday night too, with Arsenal boys Jack Wilshere, and Alex Oxlade-Chamberlain in the mix. Having been injured last week, there were doubts about The Ox’s involvement but Jack Wilshere, who knows a thing or two about being knackered, has given a glowing report on his fitness, saying:

Alex looks well. He was straight line running five days after getting a meniscus strain. Hopefully we can get him training over the next few days and get him ready for the tournament. He’s got a great attitude.

Is ‘He’s got a great attitude’ the football equivalent of reviewing a song by saying ‘It’s got a good beat’? Anyway, it’s good news for England and us because it strikes me that Oxlade-Chamberlain is part of the reason why Arsene Wenger decided not to go back for you know who.

He has long insisted that he’d develop into a central-midfielder and his best performances for us have come in there, I think. He was good at Bayern away, played a stormer there against AC Milan a couple of seasons back, and won the game for us against Crystal Palace with two goals that showcased what he might bring to the team in the future.

If he makes a mark at the World Cup it’ll boost his confidence and the confidence in him to perform. For all the jokes about ‘not killing’ a player by bringing in another one, sometimes a manager does have to ensure that there’s the right path for a young player to take. If he believes in Oxlade-Chamberlain’s ability to step-up and make a significant contribution, then that might have played a part in his thinking.

I’m not saying it will happen, as he’s still just 20, but if his career can take a jump forward like Aaron Ramsey’s then maybe it’s the right thing to ensure that he’s not squeezed out. We’ll see, I guess.

Not much else going on, but for some World Cup context, this, from the brilliant John Oliver, is worth the 13 minutes of your time. Till tomorrow.

Oxlade-Chamberlain now a saga: what Arsenal should do but probably won’t