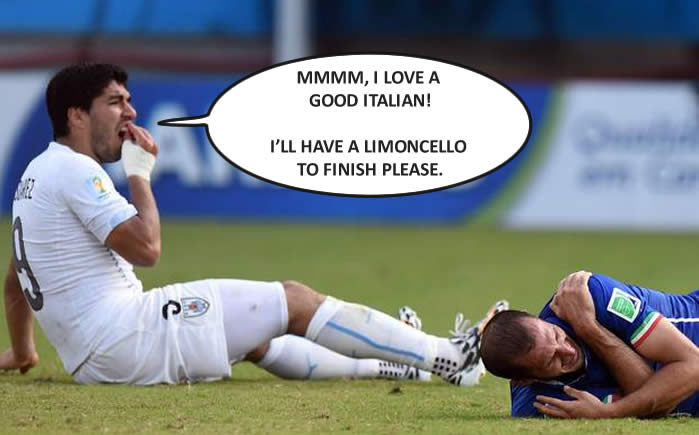 I watched the first half of Uruguay v Italy yesterday and when the half-time whistle blew I was glad that I was going out to play football myself and wouldn’t have to endure the second half of what was, up to then, a horrendous game.

It was foul after foul after foul, with neither side covering themselves in glory when it came to their reactions. There was a lot of play-acting in what was the most cynical game of the tournament so far. So, on the non-World Cup pitch we’re warming up and a few of the lads turn up a bit later with news that Luis Suarez had bitten someone again.

I can’t say I was surprised but I thought maybe it was something that had been overplayed, especially as the guy he bit, Chiellini, was guilty a couple of times of over-acting and suggesting he’d been elbowed in the head when it was just the normal coming together of players in the box.

But, there’s no doubt he got bitten. Luis Suarez, a man banned for biting twice in his career, quite obviously took a chomp out of his shoulder. There are various angles which show it, but none more clearly than this one. He looks, picks his spot, then lowers his fearsome jaws before biting down. There’s nothing more to it than that and the news that FIFA have opened disciplinary proceedings against him is no surprise.

I suspect that his World Cup is over and, frankly, it’s the least he deserves. Biting somebody is, let’s be brutally honest about this, fucking weird. It’s what children do. For a grown man to do it once is odd enough, but perhaps you can find some vague excuse for it – heat of the moment, or provocation. Perhaps. To do it again, as he did when he munched on Branislav Ivanovic, speaks to some deep-seated issues, and now, to make Chiellini victim number three … well, there’s just no way to defend him (even if some Liverpool fans are doing their very best).

It’s just a ridiculous thing for anyone, least of a football player, to do. I’ve seen people go way over the top with their condemnation, suggesting he should be charged with a criminal offence. Yes, if he did it in the street blah blah, but he didn’t, he did it in an arena where there’s plenty of scope for him to be punished sufficiently. I’ve also seen suggestions that he did it in order to drive down his transfer price this summer, but I don’t buy into that.

Even in the footballing world – where bad behaviour is overlooked, ignored and forgotten as a matter of course – it would surely give any potential suitor pause for thought. Let’s say he’d cost £50-60m, that’s a lot of money to spend on a man who could simply repeat that behaviour at his new club. If anything, it’s probably good news for Liverpool because it’s blindingly obvious that he is an unpredictable character who cannot properly control himself and there comes a point where the risk involved in signing him becomes too great.

It was always one of my fears in our pursuit of him last summer, that his character flaws would be an impediment to his career, and if he’s willing to do what he did yesterday in the World Cup – an action that will seriously damage his country’s chances – he’d have no compunction doing it to the detriment of his club, a wage paying vessel to which he has no emotional connection.

He’s a great striker, but an awful man. He’s a serial cheat, something many people justify by saying he’s also a ‘winner’. Tell me, what exactly did he win with Liverpool? He has bitten somebody three times in his career. Three times. It’s just not normal in any way. There have been players with violent tendencies before but that’s usually displayed in a more traditional way, via the medium of nasty challenges, the odd punch and perhaps a headbutt.

Biting people is just really, really strange. And unsanitary. The image of Suarez sitting on the pitch holding his teeth as if there were some accidental collision is as pathetic as it is worrying. Maybe the guy needs to admit he’s got a fairly serious problem. It’s trite to say he’s not right in the head, but if you had a kid who kept biting people in school you’d start to worry about their mental health.

I think FIFA will come down hard on him, the evidence is there for all to see, and for all the jokes and everything else, I find it just a bit unsettling to see a man who either can’t, or won’t, learn from his past behaviour. He’s a player whose career is utterly tainted by his misdeeds and to do it on the biggest stage of all means that legacy, not his goalscoring, is the one which people will remember most of all.

As for the football, well Italy are out having gone down 1-0 to the Uruguayans. The clamour for Mario Balotelli to join Arsenal has been incessant over the last few weeks, but the goal against England aside, he’s had a pretty dismal tournament and has done little to suggest that he’s got the quality to make a real difference at Arsenal. Yesterday was another day when the flaws his character (maybe there was something in the air), were quite evident. Already on a yellow card and suspended for the next game, he was hauled off at half-time because a second yellow seemed inevitable and the manager couldn’t trust him.

In the end it was down to one of his teammates to see red, but I’ve genuinely been unimpressed with Balotelli for the most part. Tellingly, Arsene Wenger flat out denied any interest in him yesterday. Speaking to beIN Sport, the boss said:

No, that’s pure invention. We cannot believe absolutely everything that is on internet or is in newspapers. Sometimes it’s created by agents or by press who needs news. But in that case, it’s not true.

As we spoke about in yesterday’s Arsecast Extra, I’ve never been convinced that our supposed interest in him was anything more than his agent kite-flying to ensure he gets his move away from AC Milan this summer. All he ever said was that we were a club that could afford him, not a club that had any real interest in him. I hope we look elsewhere (Sanchez … *cough* …).

England drew 0-0 with Costa Rica, didn’t see any of it so can’t comment other than to say Jack played about 70 minutes. In the other group Colombia were great to watch again as they beat Japan 4-1. James Rodriguez catching the eye again, while there was heartbreak for the Ivory Coast as they were sent packing by a late Greece penalty. I find it hard to have any sympathy for a team with Drogba in it though, so it’ll be interesting to see the Greeks in the knock-out stages.

Today we’ve got Nigeria v Argentina and Bosnia and Herzegovina taking on Iran who can still qualify if they win today and Nigeria lose. Later on France take on Ecuador while Honduras play Switzerland with the Swiss still capable of going through despite the pounding they took last week.

Finally, if you fancy hearing our thoughts on Balotelli, Sanchez, referees with tasers and why Arsenal medicals are too thorough for our own good, check out this week’s Arsecast Extra. James is back from Brazil having almost been called up by Roy Hodgson and there’s plenty of World Cup chat in there too. Get listening!