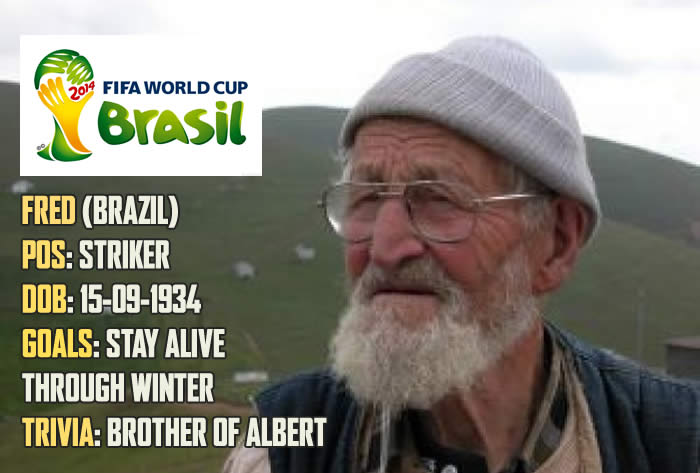 It was a World Cup of one half for me yesterday. Due to various things I only saw the second half of each game and the quality varied.

Belgium, without Thomas Vermaelen in the starting line-up, came from behind to beat Algeria with goals from Screech from Saved by the Bell and some other bloke who was set up rather well by Eden Hazard. That came after Vertonghen gave away a first half penalty with a daft push on some bloke. There’s insight you don’t get from the likes of Phil Neville, let me tell you.

Then there was Brazil v Mexico and the stand-out player was Mexico’s goalkeeper, Guillermo Ochoa, who made a string of excellent saves and instantly became the latest player Arsenal should sign because he had a good game at the World Cup.

I did some analysis and some Twitter research, collating all the players who have performed well in Brazil so far, and the results are quite astonishing. Feel free to share this because it’s like crowd sourced data and all that, and people love that shit, but basically it turned out like this: 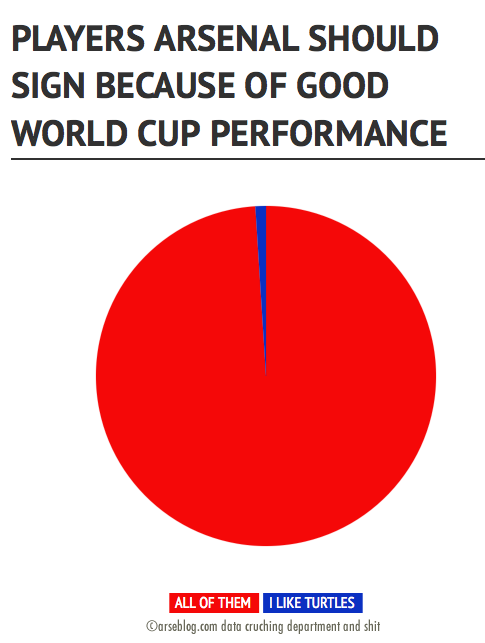 Look, it’s got a pie chart, so it must be official and stuff. Apparently, Ochoa is a free agent this summer having come to the end of his contract with Ajaccio, formerly of Ligue 1 as they were relegated last season. Taking a player from a French side that has just been relegated doesn’t sound like something Arsene Wenger would do but stranger things have happened.

That said, it’s a real indictment of the world we live in that no sooner had the game finished than certain websites were jumping on the Ochoa bandwagon, writing what I’m sure are entirely fictional stories about how he’s on our radar and we’re going to battle someone to line-up a swoop for him. There really isn’t an ounce of shame, or integrity, in any of them.

Still, I guess it’s normal and Arsenal fans won’t be alone in putting on the ‘I Want’ hat every time somebody plays well. As for Brazil, well I think it’s easy to trace their decline to the names of the players they’re putting out.

When you’re playing a bloke called Socrates, for example, you know you’re in for a tough time against a chain smoking philosophical doctor of football. Zico, Cafu, Aldair, names that make you think they had quality oozing from their very pores.

And now you’ve got Fred. Fred! Who the hell is going to be intimidated by a man who sounds like he should be cleaning out a pigeon loft, not scoring goals in a World Cup? Bernard. You might pronounce it ‘Ber-naaaaaarrrr’, if you like but you’re not fooling anyone. It’s Bernard, the lonely County Tipperary farmer who has worn the same jumper for 23 years and always has a mild smell of turf off him.

And even if you try to make Joe sound exotic by lopping off the ‘e’, it’s still the same bloke who came to Man City for a bazillion pounds, scored about two goals and then everybody assumed had gone off with his riches to live in a penthouse somewhere and grow large with food. It’s just hard to imagine that a country that has produced so many amazing footballers is trying to win a World Cup with this bloke. Anyway, Mexico deserved their 0-0 and Brazil now face Cameroon in their final group game.

The late game was South Korea v Russia and Park Chu Young started to provide some real Arsenal interest. That wore off after about 2 seconds and at half-time I made the executive decision to not give a shit what happened so went to bed. As it turned out I missed a howler by the Russian keeper, and a late-ish Russian equaliser as the game finished 1-1.

I don’t know if anyone played well enough to make them a must-have for us in the transfer market this summer, but I think we’ve got enough to be going on with for now. Today is interesting with Australia taking on the Netherlands and Spain looking to bounce back from their paddlin’ as they play Chile. Late on it’s Cameroon v Croatia, which could be tasty but the players should be advised that a good first half would go a long way to assuring my viewing of the second. If they could sort that out, that’d be great.

From an Arsenal point of view, the only thing that’s really happening is that the Premier League fixtures are set to be released at 9am. The whispers say that it’s Liverpool away, but I wonder if that’s actually the case of they’ve used some misinformation to smoke out a mole. We don’t have long to wait to find out.

News of the fixtures and some vague analysis of it will be found on Arseblog News as soon as it happens. More here tomorrow.