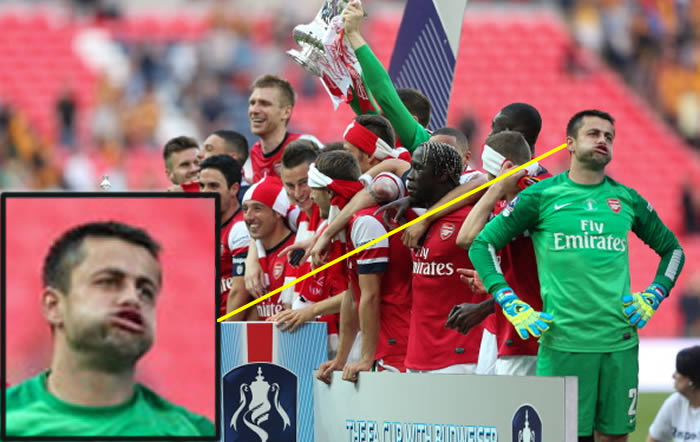 How is it Wednesday already? A minute ago it was the weekend and now this.

Anyway, although there is still a bit of stuff about that bloke who has dominated the pages this week, we’ve got something from Thierry Henry first. He spoke about his happiness at Arsenal winning the cup. Not just from the winning point of view but also from getting that trophyless monkey off our backs.

Now though, he wants to see the club kick on. Referencing players like Cazorla, Koscielny, Ramsey and Ozil, he told the Standard:

You can see Arsenal has a good future – but you have to back it up with something. We will be here to support to make sure they bring something but I have no doubts about the quality of the team that they have and hopefully they can build on winning the the FA Cup and winning the title because that is what everybody is waiting for.

I guess he’s talking about squad investment and adding to areas of the team that need to be improved. I’m certainly a lot less uptight about what we do this summer than in previous years, and I do think much of that is down to the fact we’ve actually won something.

The desire for transfers was fed by the desire for a trophy and after so long without the latter the former took on more and more importance. This time around it’s easier to let things happen as they will, knowing that we’ve got a squad that is capable of winning something, but also the least divisive I can remember.

The departures of Bendtner and Park and rid us of the last hangers-on who, ultimately, contribute nothing and although one or two players might get people bent out of shape from time to time, we just don’t have the characters in the squad who instantly cause debate to turn to back-alley knife fights.

Of course one of the long-standing issues about Arsenal – and not just under Arsene Wenger – is how we’ve failed to push on after a season of success. At times when you felt like just being a little adventurous and ambitious in the market would really make a difference, we’ve kept our powder dry.

Now though, I do feel like there’s an understanding that in order to bridge the gap between fourth and first we’ve got to invest properly. The gap is just seven points when you look at the table, but the margins in general are so tight that you need to be very smart and buy well to compete properly right until the end. A £10m player might not have the required impact in a key position, a £25m one is more likely to.

That’s not to say you can’t find a bargain and anyone who thinks Arsene won’t be looking for them this summer obviously hasn’t been paying much attention over the years, but I think there’s an onus on us to start looking at a different part of the market than the one we usually shop in. Which will make what we do interesting as and when it happens, but as I said, I’m not going to start worrying about any of that just yet.

Lukasz Fabianski, one of the soon to be departed, has thanked Arsene Wenger and the club for allowing him to bow out in style by playing him in the cups. He made his decision to leave in December (in fact he’d been keen to go before that but injury prevented any more timely transfers), and the manager obviously kept his word right up until the final. There’s little point playing ‘what-ifs’ with that decision, even if it’s one I disagreed with, and it’s nice that the final memories for all concerned are positive ones.

Meanwhile, Santi Cazorla has spoken about the Cesc situation, saying:

I’ve read that he could go to Chelsea but I’d prefer him to come to Arsenal because he’s a great player and they really love him there.

It’s one of those classic players want the best players situations. Not to mention players don’t want the best players to go to competing clubs, I guess. Anyway, we’ve said enough about Cesc this week without too much to go on. I suspect it’s going to be one of those situations that’s resolved after the World Cup. PSG could probably use him, right?

Still, it’s something we’ll have to touch on in this week’s Arsecast Extra which we’re recording this morning. If you’ve got questions fire them over to @gunnerblog and @arseblog on Twitter with the hashtag #arsecastextra and we’ll get to as many of them as we can.

The podcast will be available around lunchtime and hopefully we’ll find a few bits to talk about to keep your ears entertained for an hour or so.

Column from Tim Stillman later on, more from me later and tomorrow. Until then.