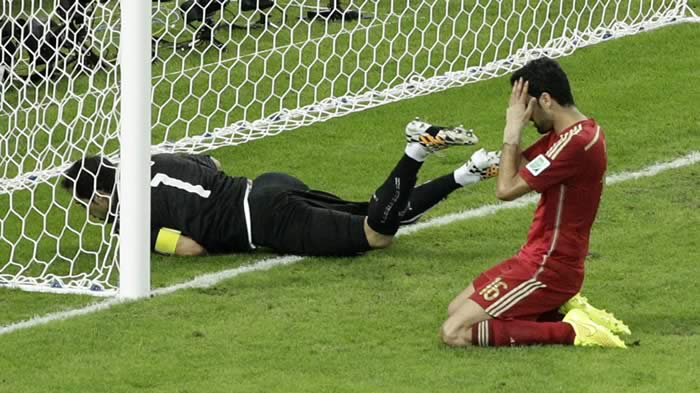 Truly this is the World Cup that keeps on giving. Another fantastic day full of fun stuff.

First up we had Holland v Australia and that really was one of the games of the tournament so far. The Aussies went behind to a fantastic Arjen Robben goal before Tim Cahill levelled within minutes with what I reckon was the goal of the tournament so far. The ball over the top was speculative, but his left-footed finish on the volley – which did that awesome thing of cracking in off the underside of the bar – was just brilliant.

I thought they were a bit fortunate to get the penalty but it was put away with aplomb, yet concentration levels dropped and the left back played van Persie onside to equalise. Again, both goals came one after the other. Australia might have scored just before the Dutch got what turned out to be the winner, and you do have to ask questions of the keeper for his part in it. But in comparison to some of the howlers we’ve seen in this World Cup so far it wasn’t that bad.

Towards the end I thought Australia had the chance to put some real pressure on Holland with a number of free kicks which they took quickly. Credit to them for trying to play that way, but when there’s just a couple of minutes left on the clock and you’re desperate for a goal, it’s sometimes best to men and ball into the box and see what happens. Still, despite the two defeats, they’ve been really fun to watch and as their next game is against Spain we could see larks-a-plenty from the two eliminated teams.

The holders crashed out against Chile and after what happened in the first game it shouldn’t be any surprise. It might well have been a bad day at the office, but I think it was also indicative of how this group of Spanish players has been run into the ground over the last few years.

They’ve gone all the way in the last three big tournaments, winning Euros 2008 and 2012 as well as the World Cup in 2010. They were involved in the pointless money-spinner that is the Confederations Cup in 2009 (finishing third), and were finalists of it last summer. And whenever there was a friendly game to be had, Spain played it, regardless of where it was and what it might mean to their players.

While others were playing ‘local’ qualifiers, the Spanish side were being flown to South America, South Africa, the middle-east, or anywhere that they could squeeze in a couple of games they had no footballing reasons to be involved in. Of course success brings its own challenges and everybody wants to see the World Cup winners etc, but it felt like something of a gravy train. Having waited so long to achieve something in international football, it meant there was a desire to cash in on it as much as possible too.

Commercial pressures outweighed common sense when it came to looking after players who were playing high-pressure, high intensity seasons with their clubs then being asked to the same for their country summer after summer after summer with no break. I can’t say I’m that sad that they’re out – everybody likes a bit of change and for the underdog to do well at a tournament like this –but I still think it’s a bit of a shame the way this group of Spanish players, who were so good to watch when they really clicked, have been played to point where they’re simply too bollixed to compete.

But then that’s the way the people who run football tend to look at things. Players are commodities: the interests of sponsors, ticket sellers, advertisers and all those people far outweigh what’s best for them or for the fans, which is why the decision to host the 2022 World Cup in the desert in the middle of summer is such a reprehensibly dishonest one. It’s easy to laugh at it and FIFA’s corruption, but it’s genuinely a very serious problem and one that really should be addressed properly. It really shouldn’t be allowed to happen.

FIFA claim to want what’s best for the game, but there is nothing whatsoever beneficial about holding the World Cup in Qatar, except to those whose vested interests are in making money from football. It’s bad for fans, it’s bad for players, it’s bad for clubs (whose seasons will probably have to be disrupted), yet all the recent exposes which show how corrupt the decision making process was seem to have made little difference. So what do we do? And yes, I do feel a little weird enjoying this World Cup knowing how things played out in Brazil before the tournament, but then I guess that’s what FIFA bank on – the football itself acting as the amazing distraction it can be.

Anyway, credit has to go to Chile for the way they won the game last night. Iker Cassilas might have made a woeful error for their second goal, but the finish from Aránguiz was sensational. Diego Costa up front was, frankly, brutal and hopefully he’ll keep that up all season long for Chelsea. No doubt the incentives he got to declare for the Spanish were more than worth being involved in two of their worst games in years.

Then, late night hilarity, as Alex Song got sent off for Cameroon in what can only be described as act of gross stupidity – and considering he set the bar pretty high for himself, that’s saying something. Croatia were already 1-0 up at that point, and Song’s red card ensured there was no way back. Mario Mandzukic, linked with us quite often, scored two so that can only mean we can refer to yesterday’s pie chart once more.

Today, Colombia play the Ivory Coast, Japan take on Greece, but the big one is Uruguay v England. The word from the England camp is that Alex Oxlade-Chamberlain hasn’t recovered sufficiently to be involved, so he’ll obviously be hoping that England make enough progress for him to take some part in the tournament. Luis Suarez is back for the Uruguayans, and the whole thing looks quite tasty indeed.

Nothing much stirring from an Arsenal point of view, apart from the fixtures that were released yesterday. There don’t appear to be any death-runs like season, which is good, but facing Chelsea, Everton, Sp*rs and Man City in the first seven games makes for a very interesting start to the campaign.

I know it’s still June and I’m in no way going to get stressed about transfers yet, but that opening schedule really does make it important that we’ve got our squad in the best shape possible for the kick-off, not by the end of the transfer window. Fingers crossed on that.

Alexis will play for Chile : Wenger on safe-standing