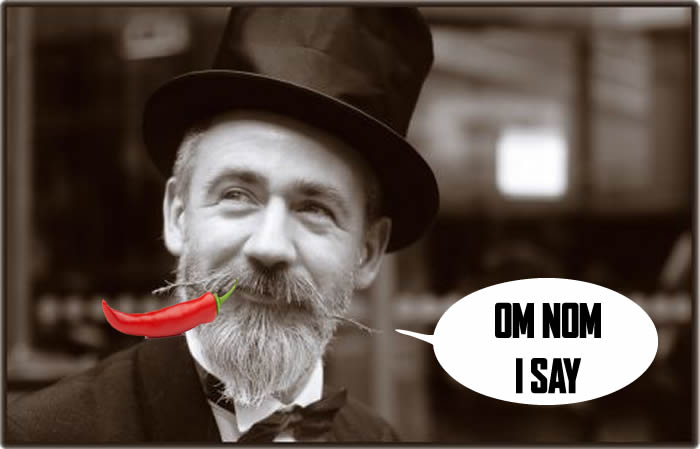 World Cup rest day. I suppose they had to have one, but it felt weird not having any football to watch yesterday. Thankfully things will be put right today.

The knock-out stages kick off with Brazil v Chile, which really does promise to be an exciting encounter. Brazil, the hosts, against Chile, the country that invented the hot pepper. Latin spice, oooof, and such.

Did you know how chillies came to be? A man named Aubrey Pondsweat travelled to South America with a regular capsicum and cross-bred it with seeds from a plant he discovered in the rain forest that he named ‘Tongue Bastard’. From there we got all the varieties of chilli that we enjoy today, like: Bird’s eye, Habanero, Cayenne, Jalapeño, Scotch Bonnet and The Anteater’s Gooch.

Imagine life without that kind of spice in it. It just doesn’t bear thinking about. How flavourless and mundane everything would be, although there’s something to be said for not having those moments when you’re chopping chillies and then you head for the bathroom and forget to wash your hands beforehand and you end up with a kind of throb where there really should never be that kind of a throb.

Chile, of course, have Alexis Sanchez, a man for whom most Gooners have a bit of a throb on at the moment. It’s hard to believe he’s only 25, he looks at least 27 to me, but it’ll be interesting to see him and what he can do against the favourites tonight. Hopefully Arsene’s beach football antics look so relaxed because he knows he’s already got all his business done and is just waiting for the perfect time to announce it.

Speaking of the boss, he was asked about another Chilean yesterday, the Juventus midfielder Arturo Vidal. I’ve longed for a player called Arturo to make the first team with us, simply because I want him to score the only goal in a game so I can use the headline: Geek – Love. It’s why I was so upset when Lupoli failed to make the grade (funny story: he’s now a pastry chef in Livorno famed for his Sfogliatelle).

But Arsene said of Vidal:

Vidal is one of the best midfielders in the world. He has everything. Incredible stamina, perfect timing. He’s a marathon athlete who plays football.

He does have everything, it’s true. Even a tattoo of his initials on his neck which must come in incredibly handy for when he gets lost in the supermarket and kindly people can identify him straight away and bring him back to his fretful mum.

“How many times have I told you not to wander off!”

Naturally the manager’s quotes sparked a raft of stories suggesting that we are going to buy him or that he’s ‘on our radar’, but sometimes an answer is just an answer and not indicative of any interest. For example, if you asked me if I liked southern fried chicken my answer would be yes, but that doesn’t mean I want to eat southern fried chicken right now.

Ok, that’s a shit example. I really would like some chicken now, but in this case Arsene was asked about a player, gave his honest opinion, and that’s really about all there is to it. Unless he views Vidal as a kind of southern fried chicken in which case I can guarantee you he’s now weighing up a bid.

In the other game later on, Colombia take on Uruguay who will be without Luis Suarez, obviously. They do have Edinson Cavani, a man who looks like he’s made up of lots of other men all stitched together but had the scars smoothed out by a first time Photoshop user, but I’ve been really impressed by Colombia so far.

Yes, their dancing has been ace, but James Rodriguez looks a player and a half and a quarter of a half on top of that. The commentator the other day was calling him ‘Ham-ez’, instead of the traditional pronunciation of James. Mmmm, ham. But I’m looking forward to seeing him do his stuff today.

There is no Arsenal news, just in case that part wasn’t clear. I think I’d best take the wolf for a good scromple, then address the chicken issue.