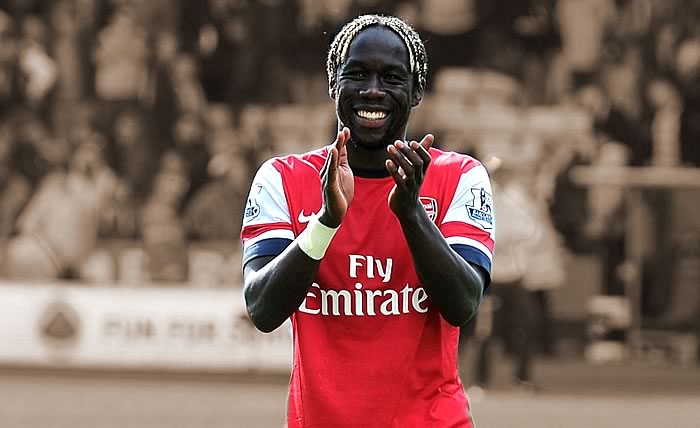 A week of completely unsurprising news continues with Bacary Sagna ruling out any vague possibility of staying with Arsenal.

I don’t think it was ever going to be an option, to be honest. I’m sure he enjoyed and appreciated the ‘We want you to stay’ songs, but in reality his mind had been made up a long time ago. Speaking to L’Equipe, he said:

It is no longer a secret, I am leaving Arsenal, it is a certainty. Arsenal made an effort, but the discussions did not go in the direction that I wanted.

Which is just a nice way of saying that it was always his intention to leave and the reasons for that don’t lie at his door. That’s just the way it goes. As I wrote last week, I bear him no ill-will at all. He gave us seven very consistent, very committed years and at the end of his contract, aged 31, he’s entitled to go try something new if he wants.

I saw how happy he was to win the FA Cup a couple of weeks ago, you could see how much it meant to him having played his entire Arsenal career through that painful drought, and that’s the kind of memory I’ll keep of him. People using social media to abuse him for doing nothing more than honouring his contract really are the lowest kind of online vermin and should all be sent to Eboueola Island, where millions of tiny little Eboues bite you on the mickey and give you Ebola.

Sagna didn’t split when the going was bad. He didn’t kick up a fuss ever. He didn’t think that after 6 good months, or after his first season without a serious injury, that he was entitled to look after number one. He played well for us week in, week out, and respected his contract. This issue of ‘loyalty’ that people go on about ignores the fact that the minute the manager decided he wasn’t up to the job any more he’d sell in him a heartbeat. It works both ways.

And he leaves with words that you know are heartfelt and not the usual platitudes spouted when a different kind of player is trying to spin/justify behaviour which rightly gets fans backs up. He said:

It was an honour to grow in the shirt. Arsenal is a club that brought me a lot, both as a person and as a sportsman. Even though we had been criticised for quite some time due to the lack of trophies, I spent some magical moments there. If I had to, I’d do it again.

Players come. Players go. The Arsenal keeps on. And so it goes.

1 – It can’t be anything other than this.

3 – During the Liverpool game at home last season, there was a moment when I think an Arsenal player was injured and Liverpool played on. Sagna took exception to this and told Coutinho in no uncertain terms what he thought. The little Mugsmasher looked like he was genuinely going to poo his pants, until Suarez came over and intervened. Most amusing.

Speaking of Top 3s, Tim Stillman picks out his top three things that added a glow to his season in this week’s column.

Meanwhile, Carl “Jenko” “Jenkers” “Jenkinson” Jenkinson has made his claim to be the man to replace Sagna, saying:

It’s an interesting one because you do feel that he still needs to develop a little further to be the right man to replace Sagna right now, but how does he develop without playing? Even if he does seem an atypical Arsene Wenger player, it’s not as if there’s no precedent.

Look at somebody like Ray Parlour. It’s easy to see the similarities with Jenkinson. A players whose best qualities are physical rather than technical. Jenkinson would probably run through a brick wall for Arsenal if he was asked to do it, and you know you’ll get 100% effort and commitment from him. He’s got a fantastic engine, he can get up and down all day long, and his delivery into the box is fantastic.

I guess it’s now down to the manager to decide if playing regularly would see him progress quickly enough as a defender to make him a realistic first choice next season. I thought he had a couple of good spells when deputising for Sagna over the last couple of seasons, but there’s no question that the Frenchman was the first choice and thus Jenkinson’s chances were limited as long as he stayed fit.

I suspect we’ll see a signing this summer at right back, but it wouldn’t surprise me if this was an area where, if the manager couldn’t find the right man, he might give Jenkinson a go.

Finally, our podcast server is back up and running so you should find the latest episodes in your iTunes and available for easy download. There’s a fair amount of uploading needs to be done again though so the archives might not work so well for a day or so, but we’ll get it sorted.

Thanks as always to Tagadab for sorting things out and if you need hosting, that’s where you should go.