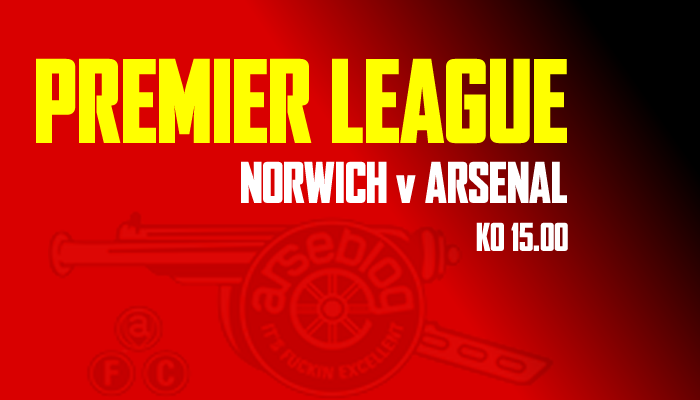 So, the final day of the Premier League season is here, and there’s something missing. Oh yeah, it’s the dread gnawing at my innards as we face the prospect of missing out on a top four spot to Sp*rs, of all people.

I have to admit, despite this season not ending up as well as I would have liked, on this point alone I’m pretty comfortable with today’s scenario. As hilarious as ‘It’s 1-1 at Newcastle’ and all that is, it makes a change not to be filled with bowel-clenching dread. It means there’s no excitement, as such, but given that we’ve got a cup final next week I’m fine with that too.

As we’ve seen this season, it takes just one slip to totally change the momentum for one team or another, and having done it two years on the trot on the final day, there’s always the nagging doubt that our luck might run out. As it happens, we know we can’t finish higher or lower than fourth, and if we win we end up with 79 points, our highest total since the 2007-08 season.

Norwich can stay up if they beat us ludicrous amounts of goals to nil and West Brom lose by a bucket load, but that’s not going to happen. I suppose they, at least, have to pretend it might in front of their home fans on the day they’re going to be relegated, which is why I echo my thoughts from the other day and hope we rotate like the dickens.

Gibbs, our best left back, needs a run out before the final while Wilshere is just back from injury and could do with the playing time. Assuming everyone’s fit he’s not going to start next weekend, but with the World Cup around the corner it’ll be a good run out for him and a chance to ensure he’s at least got some minutes under his belt before going off to Brazil and getting injured and then missing all of next season

I just don’t see any point in risking the likes of Ramsey, Ozil, Arteta or Giroud – players absolutely fundamental to the team – for a game which doesn’t matter. I know we’ve got momentum to think of, but if a poor result at Norwich brings about a poor performance at Wembley then we’ve got bigger problems than any of us would like to think.

I’d have a bench full of kids too. Zelalem, Akpom, Eisfeld, Bellerin, Hayden, some random lad who was hanging around during the week outside the training ground. Of course, what I would do and what Arsene Wenger will do are very different things, and I have a suspicion there’ll be a few changes but nothing quite as radical as I’ve suggested.

You can be quite sure the players themselves will have an eye on Wembley too. Nobody is going to – or at least nobody should – risk their place in a game that doesn’t make any real difference to our season, so if we see an inhibited Arsenal performance today then I don’t think we should be surprised.

The good thing, as I mentioned above, is that there’s no danger today. There’s nothing anyone can do that will cost us anything important in terms of our league position, and while I obviously hope we win this today, I just want those who do play to come through unscathed so we can start preparing properly for the cup final.

In other news, Bacary Sagna has more or less confirmed what we all knew about his future. Speaking to europe1.fr, he said:

I am out of contract , as everyone knows. I still consider myself as an Arsenal player at present. But actually we had a small problem to agree [a new deal], and I do not think stay I’ll stay at Arsenal at the end of the season.

Hardly a surprise, of course, but he’ll be nothing less than 100% professional. His final game is likely to be the FA Cup final, and after seven years with the club, it’d be such a nice way for him to go out if we could win some silverware. The other thing is what to do about replacing him.

Gingers4Limpar and I had this discussion on this week’s Arsecast, and the bottom line is that if we’ve all known for some time that he’s going, there’s absolutely no reason for the club not to be fully prepared for it. If they feel Carl Jenkinson is the man to take over, then they’ll have made a decision on that. If they have doubts about him, then transfer targets should have been identified by now.

Right, that’s about that. Assuming I can find a good stream there’ll be a live blog for today’s game. Check back later for a post with all the details, or simply bookmark the default live blog page.

Also today, there’s a Paddy Power New Account Exclusive – Arsenal fans can avail of a 4/1 price on Arsenal to beat Norwich on the last day of the Premier League. Sign up through the link below now – http://pdy.pr/Arseblogwin

Here’s to an injury free day, until later.