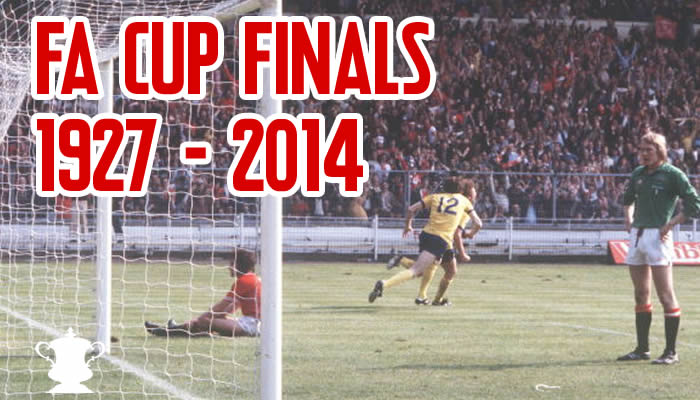 This month, Arsenal will be appearing in their 18th F.A. Cup Final, equalling Manchester United’s record of Cup Final appearances. They’ll also equal Manchester United’s haul of 11 F.A. Cup victories should they prevail against Hull City, the best total in the competition’s history. Cup Finals involving The Gunners are rarely ordinary affairs, be it in triumph or heartache. From the sheen on Dan Lewis’ jersey, to the first ever cup final played under a closed roof, Tim Stillman has cast an eye over all of Arsenal’s cup finals and picked out the most unique moments.

Arsenal qualified for their first cup final in 1927 and were heavy favourites to land their first major silverware against Cardiff City. This was the first F.A. Cup Final ever to be broadcast live on the radio and the nation tuned in expecting a comfortable Arsenal victory. However, the Welsh side made life very difficult for Arsenal and took a shock lead in the 74th minute through one of the most notorious goals scored in a final.

Cardiff striker Hughie Ferguson hooked a tame shot towards goal, which was well covered by Gunners keeper Dan Lewis. But as he swooped to gather the ball up, it slipped between his elbow and under arm. He scrambled desperately to retrieve it, but Lewis only succeeded in knocking the ball in with his elbow. It was the only goal of the game. The cruel irony here was that Lewis had been capped by Wales for the first time that February and his error led to the cup being won by a Welsh side for the only ever time to date.

Lewis blamed the sheen on his brand new goalkeeper’s jersey, which he said caused the ball to slip out of his grip as he attempted to gather it. Since that day, no Arsenal goalkeeper has worn a goalkeeper’s shirt that hasn’t been put through the wash first. Arsenal were back at the final three years later but Lewis was injured for that final and Charlie Preedy played instead.

1930 – A Graf Zeppelin and another tradition begins.

Arsenal were back at Wembley three years later and the opponents were Huddersfield Town, who had been transformed into one of England’s premier football clubs by none other than Arsenal boss Herbert Chapman. As a mark of respect for the great man, the two teams walked out onto the pitch at Wembley side by side, a tradition that has survived to this day.

The match is remembered for a rather unusual visitor. A 776 foot Graf Zepellin (piloted by a German man named Lehmann) hovered menacingly over the stadium to the whooping amazement of the 92,000 crowd. Arsenal won the game 2-0 with goals from Alex James and Jack Lambert, securing the club’s first major silverware.

Arsenal played Newcastle United in another north v south affair at Wembley in 1932. Arsenal assumed a first half lead when Bob John headed them in front. But there was more than a hint of controversy in Newcastle’s equaliser. Jimmy Boyd’s searching long ball raced towards touch and Arsenal’s defence stopped in their tracks. But Magpies winger Jimmy Richardson did not. He hooked the ball back into the six yard box for Jack Allen to equalise.

Arsenal players were adamant that the ball had crossed the line and television replays confirmed their suspicions. Goalkeeper Frank Moss raced from his area to confront referee Mr. Harper, but his complaints fell on deaf ears. Captain Tom Parker ushered incredulous teammates away from the referee and the goal stood. Allen scored again in the second half and Newcastle won the final 2-1.

Television plays such a huge part in the landscape of modern football and has altered the sport so irrevocably that it feels almost quaint to consider that rows over broadcasting existed in the 1930s. Arsenal played Sheffield United in the final in 1936 amidst an extraordinary argument over broadcasting rights. The Gaumont British film company had offered £900 to film the final, but Wembley bosses held out for £1,500.

Gaumont refused the sum and withdrew their bid. Wembley bosses backed down and insisted they would accept the £900 initially tabled but in a fit of pique, Gaumont stated that they were now only willing to part with £500. The upshot was that cameras were banned from the 1936 final. In an attempt to circumnavigate the blackout, autogyros were hired to film the final from high above the stadium. As a result of the television ban, the BBC experimented with two radio commentators for the first time, Ivan Sharpe and Norman Creek, as the Gunners won 1-0 thanks to an Alex James goal.

Arsenal defeated Liverpool 2-0 in the 1950 final, earning the club the unique distinction of winning the cup without leaving the capital. For skipper and PFA Player of the Year Joe Mercer, the final was a homely affair for a different reason. Mercer owned a grocery store on Merseyside and was reluctant to part with it when Arsenal signed him in 1946.

So the Gunners agreed to let him train with Liverpool during the week and join the team for matches at the weekend. Given his affection for both Arsenal and Liverpool, Mercer’s post match remarks have been recorded in history. Mercer sportingly invited Liverpool players to join Arsenal in a West London restaurant that evening and warmly thanked the opponents for their sporting behaviour and the good grace they had shown in defeat. It was a captain’s performance on and off the pitch.

1952- the final where everyone gets injured

Arsenal and Newcastle repeated the final of 20 years earlier at Wembley in 1952. Once again, Newcastle prevailed by the odd goal, with George Robledo scoring the winner. The Chilean became the first overseas player to score the winner in a Cup Final and Newcastle were the first ever side to retain the trophy too. From Arsenal’s point of view, the final was notable because they finished the game with only seven players. Wally Barnes twisted his knee after 30 minutes and had to come off.

Substitutes were not introduced to English football until 1958. Cliff Holton, Don Roper and Ray Daniel all succumbed to injury and followed Barnes down the tunnel. Newcastle won the game but Arsenal earned the plaudits for their spirited display, causing Joe Mercer to tell reporters after the match, “I thought captaining England was the greatest honour in the game. I was wrong. It was captaining Arsenal today.”