And so, with a rousing and wonderful performance, something ends and something begins.

What ends? The screeds and screeds of appalling jokes. About the dust in Arsenal’s trophy cabinet. May I offer a selection? They are fro that repository of the terminally humourless, sickipedia.

Arsenal confirm season ticket price increase for 2011/2012. Well they have to pay for more cleaners to clear the cobwebs from the trophy cabinet somehow!

For a start, you brainless pignuts, you do not give back an honour once you have won it. Therefore, Arsenal’s trophy cabinet now contains thirteen premier league and first division trophies, and a joint record of eleven FA Cups and two league cups.

No ones booked a flight this week as they now have to open the arsenal fucking trophy cabinet… Dust cloud coming!!!!!!!!!!!!!!

The parade of exclamation marks at the end of a joke always really slap that punchline home, don’t they? You utter whelp.

Not a soul in Albion expects Tottenham Hotspur to win a trophy. Despite spending Croesus’s riches on a gang of road-repairers and layabouts, their trophy cabinet, home to such treasures as the Norwich Charity Cup (1920), the Sun International Challenge Trophy (Swaziland) (1983), and not one but TWO glistening Costa Del Sol Tournament trophies (1965 and 1966). I am aware of the website, www.sincespurslastwonatrophy.co.uk but nobody really expects them to, despite all their amusing efforts.

There are certain phrases in foreign languages that do not have a precise translation in English. One of these is Kummerspeck in German. In English it is literally weight put on through stress. Grief bacon. One has to wonder in the weeks leading up to the final whether Mr. Bruce had been tucking into several hogs’ worth of Kummerspeck. He certainly seemed to have surpassed even the capacious the waistline of young Master Rooney.

A new, glorious era. We have built a shiny new stadium and remained one of the top clubs in Europe throughout that period. Other clubs would kill to be in our position now. Tottenham, although they have not killed anyone that we know of, have in fact at least resorted to espionage to try and shortcut the process.

What of the final tie itself? We started as favourites, but in Arsenal’s true sporting fashion, we gifted Hull Tigers a two goal lead. As sure as night follows day, and as Steve Bruce follows the scent of a bakery, Hull exploited our confounded new-fangled zonal ruddy marking, which I shall now call Frenchman’s Folly, after its inventor, Lord Frenchman, on set pieces. But we fought back, and sure enough, The Senegal Sir scored a wondrously poetic winning goal to send Arsenal into ecstasy.

I leave you with a memento of that day – a page taken from my special edition of the matchday programme. 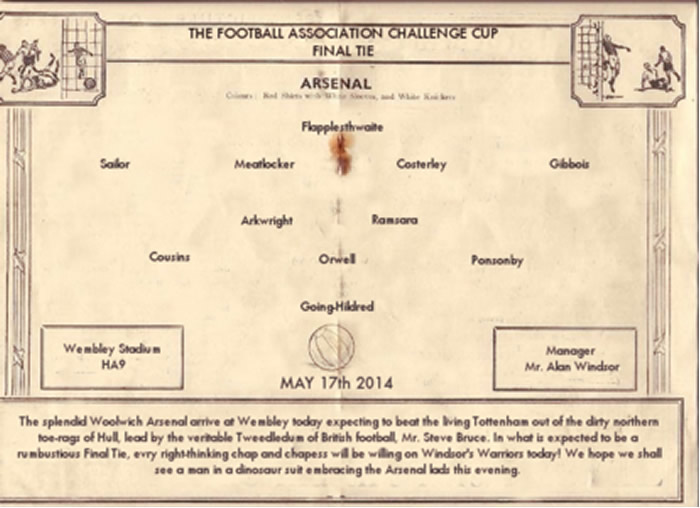 Previous articleBaskary Sagna, that Catalan lad + Arsecast 318
Next articleMaybe you’ll be the next King of Denmark