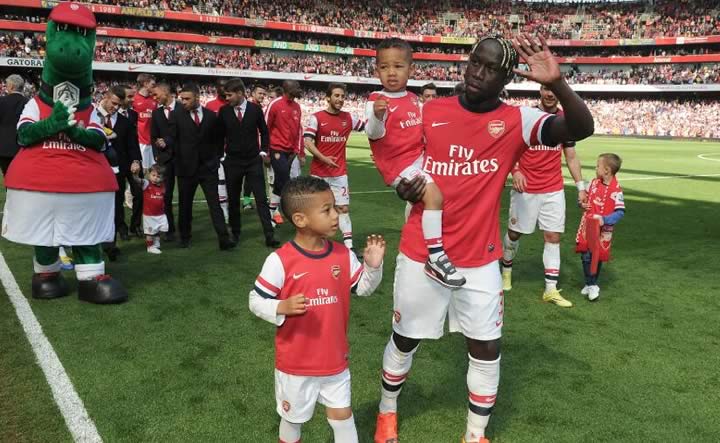 Everton’s defeat to Man City on Saturday meant that this game was something of a dead rubber, and that was reflected in the performance.

With nothing at stake, it would be foolish for anyone to do anything risky ahead of a cup final (although that didn’t stop Olivier Giroud getting involved in a late scuffle with some West Brom chap). Nevertheless, it was the Frenchman’s first half goal that settled matters. A Cazorla corner, Giroud shaped himself into a position that an artist would like to sculpt – Le papillon génial (perhaps) – and headed home at the near post.

West Brom ran around a bit and had legs and wore shorts and that, but really there was nothing to them whatsoever. We might have scored another couple in the second half. Ozil clipped a shot wide after a run into the box, and I think it was Podolski who hit the bar and saw the ball rebound off the keeper’s head to safety, but it didn’t really matter.

It was a pleasant run out on a sunny day and that’s all there really is to say about the game itself. Its significance in historical terms might be that it’s the last time we see a few of the players in the famous red and white. Bacary Sagna led the lap of appreciation afterwards with his kids, and it’s going to be quite the task to replace what he brings to this team. It’s not goodbye yet, obviously, as there’s still the Norwich game and the FA Cup final, but after 7 years with the club it’s sad that we’ve likely seen the last of him at our place.

Thomas Vermaelen got a run out for the final 15 minutes and although some will say it’s because Monreal was booked, the captain had been warming up for all the second half, so this was obviously a pre-planned substitution. You don’t generally throw on defenders for the sake of it, so it could be a case that this too was about giving him some time on the Emirates pitch for the final time.

Loanee Kim Kallstrom got some time too and the manager confirmed he’d be going back to Moscow at the end of his loan spell, but that’s what kind of game it was. We gave a guy like Kallstrom – who seems like a nice bloke and decent player – a few minutes to run around because why the hell not?

Afterwards the manager was pressed on the futures of certain players, and said of Sagna and goalkeeper Lukasz Fabianski:

I want him to stay and I hope that convinces him that we love him here and he will stay. We have two players here who are at the end of their contracts, Sagna and Fabianski. If it was down to me, they both stay.

Which sounds nice, but the point is it’s not down to him at all, and when things reach that position we all know what’s what. There hasn’t been inaction with regard to either of them. New contracts have been offered, discussions and negotiations have taken place, but Sagna wants to try something new and take advantage of the fact that at 31 he can secure a lucrative Bosman, while Fabianski simply wants to play football regularly.

We can’t really give either of them what they want, and they’re perfectly entitled to make the best decision for themselves considering their contract status with us. The manager’s own future was brought up, and he was asked if he was going to be at the club next season. His answer:

And interestingly, he said it was more to do with finishing top four than winning the cup, saying:

It is not linked with the FA Cup final at all. It was important to be in the Champions League, that is for sure.

My personal feeling is that it was, and still should be, linked with the FA Cup. Had we gone out against Wigan, that really could have been the end. Not winning in the final would do little to assure anyone that there’s much been in the way of progression despite another top four finish and the most points we’ve had since the 2007-08 season, so it’s strange not to acknowledge how important the cup is.

Still, Wembley success is something everyone should be hoping for, for obvious reasons, but for now the week is likely to be a slow one ahead of next Sunday’s final league game of the season against Norwich. I’m not 100% of this, but they could be down depending on what happens in midweek (Sunderland and West Brom have to play), which would suit us, I think. We could play a team with more than half an eye on the cup final, which would be for the best, but we can discuss that as it becomes more obvious/relevant.

It is a bank holiday here, of course, but that doesn’t mean we won’t be providing you with a delicious dose of Arsecast Extra. That’s coming up for you later on this morning.