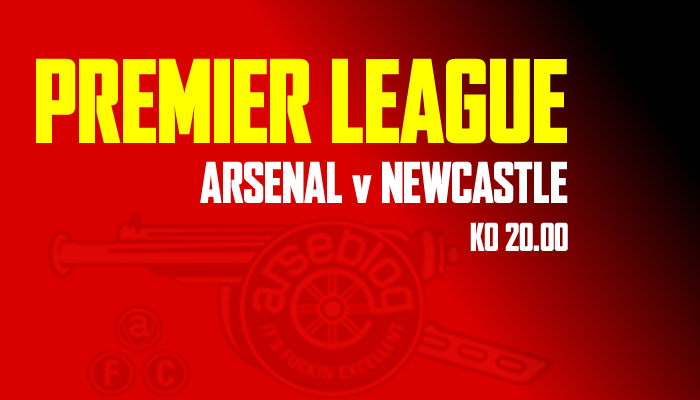 It’s Newcastle tonight after a weekend which shows you can take nothing for granted in the Premier League this season.

More on that anon, but in terms of our own task, we know three points tonight would give us a brilliant chance of securing that top four place. It would put us four points clear of Everton with just two games to go, one of those a home game against West Brom, the other away at Norwich. It could be more difficult, in fairness.

The visitors come into this one on a run of terrible form with just three wins in their last twelve league games, the other nine have all been defeats. That they sit comfortable in mid-table perhaps says a lot of about the league this season, but it’s safe to say they’re not going to be arriving full of beans.

However, they do have Alan Pardew back on the touchline after he served his seven game for lightly brushing the head of an opponent with his forehead. Whether that will make any tangible difference it’s hard to say. They don’t strike me as a group of players who are inspired by their manager anyway, so it’s hard to know if his return will do much to break them out of the funk they’re in.

My approach, however, would be to assume that’s exactly what’s going to happen, and expect a difficult game. We can’t look at their record and think this is going to be an easy one. There’s no room for complacency, because you will be found out in this league if you let things drop even a little.

It’s hard to look beyond the same team that started as Hull as the one that will line up tonight. Podolski’s goals mean he’s got to continue on the left, Giroud has been made better by the returns of Ramsey and Ozil, while both of them proved pivotal in the game at the KC Stadium last weekend. We’ve been helped that the Welshman has picked up almost where he left off when he was injured in December, while Ozil’s influence on the way we play really shouldn’t be underestimated.

Beyond the blindingly obvious it’s hard to know what else to say about this game. Having got it well and truly back in our own hands now, we can’t afford to let it slip. Everton next game is against a Man City side who now know they have the title in their hands if they win their remaining games. If we can add to their pressure by creating that gap with three points tonight, it’ll make their task just that little bit more difficult.

From our point of view I think we’ve come through a really difficult period. Some of that was of our own making, of course, some of it the weight of expectation and the need to deliver something this season, and that affected the way we played. What we saw at Hull was a team that is now capable again of controlling a game and being decisive when we needed to be, rather than chipping away and hoping to make a breakthrough somewhere.

If that performance has provided us with a renewed level of confidence and belief, then a fully committed performance should bring us the result we want tonight.

As for yesterday, and the race for the title, Chelsea were horrendous to watch yesterday, but horribly effective too. I’m not suggesting that should be the blueprint for us, but after a season which saw some fairly disgusting results away from home, maybe we need to re-think our strategy in games like this.

I’ve said it a number of times, Tim Stillman wrote about it in his column this week, but the move away from the pragmatic approach that had been so successful for us ended up being crippling. I think Arsenal playing in a way that is ‘First do not lose’ leaves Arsene Wenger out of his comfort zone as a manager. He’s always been keen to see his teams win games in an attacking way. How often have we heard him talk about having the ball as the best way to defend?

I think there’s a balance to be found which I thought we were getting close to after almost 12 months of the approach which began at Bayern away last season. It takes time to adjust to a new strategy but results made it an effective method for us – as our position at the top of the table proved. I know there were also other factors in those heavy defeats, but we can certainly take some pointers from the way Liverpool were smothered yesterday.

But just to clarify, in case anyone thinks I’ve gone mad: the time-wasting and antics are pitiful, and seeing Jose Mourinho roaring up and down the touchline yesterday – knowing full well the camera was on him – only highlights what an appalling human being he is and I would hate any Arsenal manager to behave the way he does.

Note: lest this spark some kind of Mourinho love-in in the comments this morning, I suggest you read the updated terms and conditions of arsing. Thank you!

Also, I watched Match of the Day on Sunday morning and surely the moment of the weekend was the shot of the Stoke fans celebrating wildly as one of their players went in late on Sp*rs player, well after the ball had gone. They were cheering like it was a goal, and if anything sums up that football club better than that, I don’t know what it is. It’s kind of hilarious, but also makes you wonder why they have to exist. They are the burst appendix of football.

Finally for today, for those of you that use the iPhone or iPad app – we’re working on an upgrade, but your feedback would be welcome. Can you let us know – by leaving a comment on this post only (see arses up above, registration required) – what new features you’d like to see, or what could work better? Thanks.

Remember, if you’re stuck in work later or can’t see the game, we’ll have full live blog coverage for you. Check back later for a post with all the details, or simply bookmark the default live blog page and updates will begin automatically.