Sometimes management – and the routine of selecting teams – works in hunches and intuition gathered over time rather than any piercing tactical insight. That’s why Arsene Wenger opted for Yaya Sanogo for crucial matches against Liverpool and Bayern Munich in the FA Cup and Champions League respectively. Of course, Olivier Giroud’s poor form was the instigator but Wenger had seen enough on the training ground, and being the arbiter of talent that he is, to believe that the risk was worth taking. In a sense, it was also a “hunch” which guided Wenger’s selection in Arsenal’s 1-0 defeat to Stoke City on Saturday.

Of course, there’s much value in retaining a winning side, especially one that won in such style as Arsenal did in their 4-1 win over Sunderland. It also happened that in that match, The Gunners scored the kind of goal that Wenger believes the pinnacle of football, a masterpiece team goal preceded by a blur of first-time passes and finished by Tomas Rosicky. That meant no Mesut Ozil but perhaps more crucially, given the profile of the team, miniscule ball-players who play at one tempo: their own, no Alex Oxlade-Chamberlain.

When he entered the fray, criminally on 74 minutes, it may have come with a chorus of “I told you sos” rather than the smattering of away fans applause judging by the Twitter reaction before a ball was kicked. The irony that Arsenal conceded a minute later didn’t matter; Oxlade-Chamberlain’s driving runs were painfully lacking beforehand, and he produced three great crosses and of course, the cut-back which Sanogo skied over.

There has become an accepted way of playing against Arsenal. Mark Hughes, now the Stoke manager, produced a six-point plan when in charge of Manchester City four years ago on how to play against (and beat) Arsenal. This is how it went:

They will try to break our lines. Be compact, keep distance between our lines constant
Their wide men will come in off the lines. Track the full-backs
They will press from the front, high up the pitch
Make Almunia kick, stop him rolling it out
Expose them in the channels quickly when we regain possession
Draw Vermaelen out of the back four and get behind him

And it was signed off at the end with three short, easy to remember sentences to sum their game-plan up:

In that game, Manchester City won 4-2. Of course, Arsenal are a far robust side nowadays and certainly, some of those points aren’t applicable anymore. Arsenal are more willing to go long from goal-kicks with Wojciech Szczesny often aiming for the right-hand side at Bacary Sagna or up front to Giroud. While Laurent Koscielny and Per Mertesacker have put together a fine attack-sweeper understanding at the back. However, it was still startling to see that still, by replicating that same game-plan, Stoke were able to nullify Arsenal so effectively.

In truth, playing with the same approach can make any attacking side look predictable. Sometimes it’s the only way to play; Stoke have beaten Manchester United and Chelsea at home by doing so and have also drawn against Manchester City. But it’s this unflinching belief that your way of playing is superior than everyone else’s which often overwhelms “weaker” teams. If not, those attacking sides can always rely on their superior individual quality to kill teams.

It’s fair to say that by benching their two best players available, Arsenal didn’t have that individual skill. Instead, Wenger banked on scoring that goal again, an admirable philosophy but it seemed fanciful by the final whistle. Stoke defended in two disciplined lines and made it difficult for Arsenal to play through them by marking the midfield tightly and being aggressive in the tackle. It was enough to ruffle Arsenal, who were rushed into making decisions, and as such, their usual confidence and control went missing.

What could Arsenal have done differently considering the selection? Certainly, they could have been more patient with the ball, as Wenger noted afterwards, and realised that by Stoke clogging the centre and funnelling play to the wings, it need not be a hindrance. Instead, the team should have recognised that that’s where the space was and by working the ball from side-to-side, it would have opened up space eventually, to play their “zippy” passing through the lines. Instead, Arsenal failed to penetrate the final third effectively. Every time the ball was played forward, a Stoke shirt was tight on the receiver.

But it was more than that because they were also aggressive in the tackle, sometimes over the top, and that seemed to put fear into Arsenal’s play. And we know that from recent history, when Arsenal lose confidence in their play, things start to dissipate quickly: for Arsenal playing well, at the top of their game, is playing confidently. That’s all there is to it. Indeed, Wenger believes that with the attributes his team holds dear – technique, pace, skill, creativity – victory should come naturally: as a direct consequence of their supposed superiority. As a result, losing is not contemplated, so it catches the team by surprise, sometimes leaving them almost dumbfounded. Uncertainty invades the group, resulting in a collective trauma of which there is no fallback position of which to regroup. Unless, of course, they are winning convincingly again.*

It’s time for Arsenal to believe that they are the best again – just as Patrick Vieira says they did whenever they set foot on the football pitch – and not as an entitlement. Oft times, Wenger’s men are rather too ready to accept their role as beautiful martyrs, thwarted by ill-fortune and craven refereeing and the negativity of opponents. Much of football is about managing luck, about taking the hand you’ve been dealt and making the most of it. Koscielny’s handball was harsh and indeed, it was refreshing to hear Wenger, as he has often this season to be fair, not dwell on it. Instead he tried to focus on the poor offensive performance of his team (and the solid display at the back).

The problem of facing deep-lying defences is one that Arsenal have faced many times this season. Often, they have been able to find solutions, through their quick passing or somebody who could suddenly switch the emphasis of play with a quick run or dribble into space. Wilshere and Rosicky were the players who did that in Arsenal’s win over Sunderland but here, they were unable to influence the game with Wilshere in particular, as the “free” midfielder culpable, or in some case, ignored. Indeed, such was his mute performance, he didn’t once complete any of his trademark dribbles from deep – failing on the two occasions that he did. 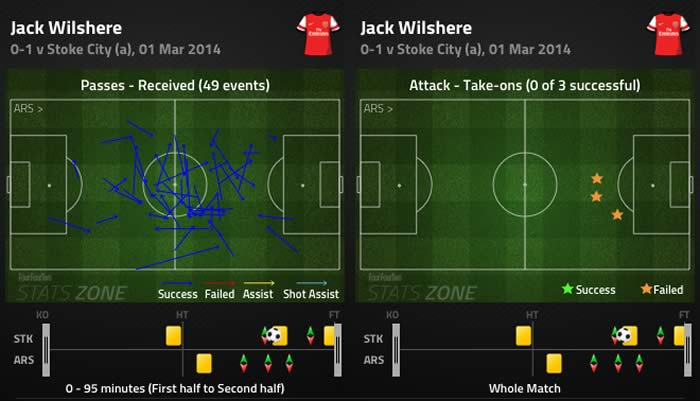 The only reason I pick on Wilshere is that running from deep to get into space is what Ramsey did so well before his injury and indeed, Alex Oxlade-Chamberlain did in his only real stint in central midfield in the 2-0 win over Crystal Palace where he scored both goals. What Stoke did well, however, was to essentially man mark in midfield, with each of the three midfielders getting tight to their man whenever the ball entered their zone. As such, Wilshere couldn’t find the space to run into to create clever angles to receive the pass. Instead, he often had to go backwards to pick up the ball in space or wide, away from play.

There were some moments, though, where he was very unlucky. On 39 minutes, he was imploring Arteta to burst forward into space so that he could play a pass forward. He did – to Giroud – and his touch round the corner nearly found the Englishman. On another, Santi Cazorla chose the wrong pass. But those moments were sporadic, as Arsenal’s movement was poor, unable to commit players between the lines as teams like Manchester City and Bayern Munich regularly do. Santi Cazorla drifting inside was the correct idea, allowing Arsenal to have an extra man to aid their combination play, but either Arsenal’s decision-making was poor or Stoke quickly snuffed out the danger.

After the game, Martin Keown gave an insight on how Arsenal practice these movements, using mannequins and springboards to perfect their control and understanding. Sadly, that was lacking against Stoke.

* via Arsenal: The Making of a Modern Superclub by Kevin Withcher and Alex Fynn.