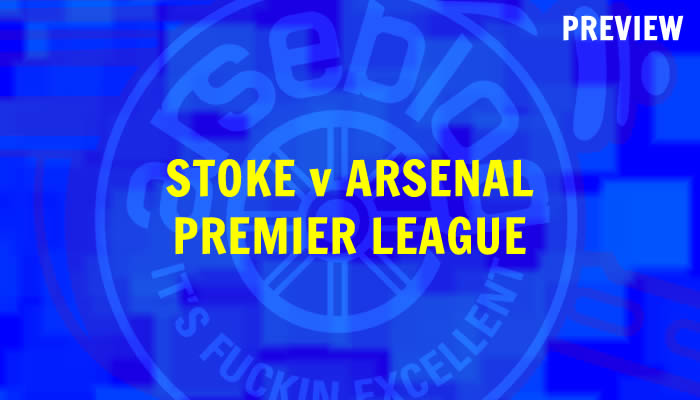 We’re off to Stoke today for Premier League action.

I’m not even going to touch on all the other stuff that surrounds this game. Sure, Stoke fans will be ‘up for it’, but as Tomas Rosicky rightly says, that hardly sets them apart from any other set of supporters up and down the country and it won’t bother the players one bit.

In terms of the team it’ll be be interesting to see how we line up. There are doubts over Gibbs and Monreal and neither were seen in the training pictures yesterday. If they’re not available then our options are to play Vermaelen at left back; play Sagna there and bring in Jenkinson at right back; or deploy Flamini in a position in which he’s done well in the past.

Each option carries a level of risk. Can Vermaelen come straight back from injury having played so little this season into a position which is, probably, the most physically demanding on the pitch? Would moving Sagna disrupt the balance too much? And maybe we might need Flamini in midfield.

It strikes me that this is exactly the kind of game in which the manager would like to use the Flamteta Axis: away from home against tough, aggressive opponents. But it depends how much the manager sees containment as part of today’s job and it would mean, probably, leaving out Jack Wilshere who bring a measure of aggression and combative tackling of his own.

Further forward, I would expect Mesut Ozil to come back into the side, most likely at the expense of Lukas Podolski. The former Real Madrid man has had 10 days off now, plenty of time to recover from his ‘dead leg’, and I bet he’s itching to play again.

He’ll be fully aware of what’s been said/written about him, and even if you you think it’s been overblown, he strikes me as the kind of character whose pride will demand a upturn in his personal form. Today would be a very good day for him to being that revival.

I think the manager will keep Rosicky in the team, and play Cazorla on the left hand side, but that means we’ll have likes of Podolski, Oxlade-Chamberlain and Sanogo on the bench if required.

I know people look at March and see Chelsea and Sp*rs away, along with Man City coming to our place, and view this game as one we really should win. I get that, and Stoke’s position in the table is reflective of their season, but I don’t think we can take anything for granted today.

They’ve pulled off some very good results this season, beating United (should have done it twice) and Chelsea, scoring 3 against Liverpool, holding Man City to a draw earlier in the season and only a Yaya Toure goal last week was the difference between the two sides. As poor as they are in general, they seem to be able to produce something extra when playing the big sides, and you can be quite sure they’ll be out to do that today.

Yet this is exactly the kind of game in which we need to prove our mettle. Whatever they throw at us (no pun intended), we have to be able to deal with, and when you look at the players we’ve got in our team, we have enough quality to take the three points.

As much as those big fixtures coming up will define our season, games like this one are just as important and we have to be fully focused.

Meanwhile, there’s good news on the contract front. We know that Tomas Rosicky has agreed a new deal, along with Per Mertesacker, but there’s a bit of a surprise in that Santi Cazorla has joined them to extend his deal at the club.

It’s very welcome, obviously, and while the main reason we’ve done this is to keep him at the club longer, this is also a consequence of the Mesut Ozil signing. When you bring in a £42.5m player you have to pay him £42.5m wages. That then creates something of a disparity in salary between the top players at the club and that’s something we have to address, hence the new deal for Santi less than two years after his signing from Malaga.

It’s not something people tend to think about when they call for big spending. It does have knock-on effects and that’s the case here. Anyway, the main thing is we’ve secured Cazorla for another few seasons, he’s happy and there should be an announcement for all three shortly.

There’s still nothing new regarding Bacary Sagna and, interestingly, the manager’s deal remains unsigned at this moment in time.

Right, that’s about that for this morning. Bon chance to all those traveling to Stoke today (remember Koscielny’s song), and if you can’t see the game, we’ll have full live blog coverage of the game for you later on. It works on all your devices and keeps you right up to date from first to final whistle.

Check back later for a full post with all the details or bookmark our default live blog page and updates will begin automatically.