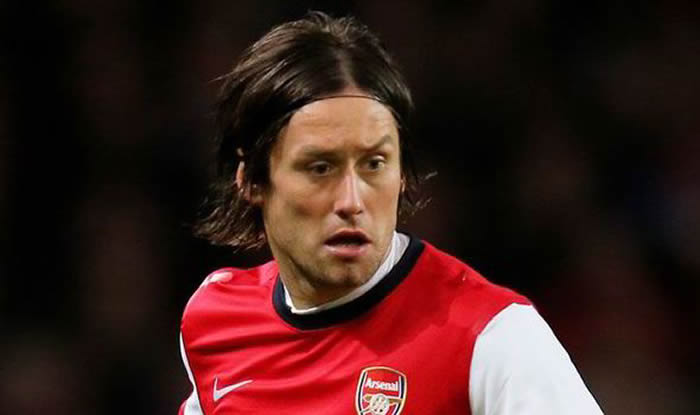 Still basking in that post-NLD glow? Why not, I say. That’s the whole point of it. I see lots of headlines this morning about how much money we have to spend this summer and frankly, at this moment in time, I could not give a fish’s tit about that.

Here we are, bang in the middle of the most exciting title race in years, with an FA Cup semi-final looming, and folk are fixated on things which can’t happen for months yet. Of course we’ve got work to do in the summer, but the actual football is far more important at this moment in time.

Some interesting stuff this morning from Tomas Rosicky who talks about the title race and our involvement in it. After his goal against Sp*rs on Sunday, he says that he doesn’t pay any attention to the people who say the Gunners can’t win the league because the squad is too small, we have too many injuries or we lack the firepower to do it.

You cannot influence what the people around you are saying. I mean no disrespect to you but I absolutely don’t care what you are saying. What counts is that you come to the pitch and win the game. The truth is on the pitch.

If you or the other people believe in us or not, it doesn’t matter for the team because you have to come and convince everyone on the pitch.

I love that, I have to say. I suppose with age and experience comes the wisdom not to care what people think about you, or what they say about you. Most of it is tired, cliched and uninformed, and if there’s that determination in the team to ignore the agendas that do exist in the press and broadcast media then all the better.

7amkickoff made a very good point on the ArseAmericaPodcast this week about how games on the TV are ‘presented to you’, so there’s a narrative. It’s why being at a game, or watching it without commentary, often provide you with a much different perspective.

How many times have Arsenal been in crisis this season, according to sections of the press? In a season when we’ve been top of the league for longer than anyone else, we’ve still had those kind of headlines. Liverpool are having a wonderful season, but Arsenal, with the same amount of points, lurch from one disaster to another apparently.

We have images of players doing what players do: talking, discussing, sometimes shouting at one another, but these are presented as symptoms of a deep malaise within our squad. It’s simply not the case. It happens at every club at every level and it’s healthy. But only Arsenal this season have had to put up with these stories, react to these stories, and explain away these stories as if there’s something to them.

This is why I love Rosicky’s attitude and why I hope his influence in the dressing room is as great as it should be. As much as the younger members of our team can learn from the experienced ones about how to play and develop their game, they’d also do well to take on board stuff like this too. There’s a tendency when you’re young to really care what people think about what you do or how you do it. There’s a need to please all of the people all of the time.

In truth, that’s pointless. Regardless of what you do, how well you do it, or anything else, there’s always some cunt out there ready to stick the knife in. Those people really are best off ignored, and that’s what Rosicky’s talking about here. There’s no point Arsenal worrying about what people say about what we can and can’t do, the only thing that matters is what we do on the pitch, and for the vast majority of this season, what we’ve done has been very good.

We’ve had our moments when things haven’t gone as well as they should have, but that’s also true of every other team in the league this season. Over the last week we’ve come back from a bad, bad result against Stoke to beat Everton in the FA Cup, draw with Bayern Munich away from home, and beat Sp*rs at their place. That’s what counts. As he says, the truth is on the pitch. Now we have just have to keep up the truthiness until the end of the season and see what happens.

There’s also a really fine interview with Rosicky in this month’s Arsenal magazine, which I recommend getting hold of. He talks about his influence in the dressing room and on the pitch, and whether or not he’s in a rush to win things at this point in his career. He says:

I cannot say I am in rush to win trophies just because I know I’m near the end. I’m hungry for success anyway. I won three titles in the Czech Republic before I left, I won the Bundesliga with Dortmund and I still believe I can do it here. I wouldn’t stay here if I didn’t believe. The idea of winning the league and the Champions League drives me forward. I love it.

After all the injuries he’s had, which have robbed us of a player who really could have made a big difference at important times in seasons past, it’d be brilliant to see him be a part of the first Arsenal team to win something in such a long time.

Finally for today, why not have a go at yesterday’s Arsecast Extra? Lots on the agenda, revolving around what happened at White Hart Lane, and there’s some laughing at people who deserve to be laughed at too. Get it while it’s hot.