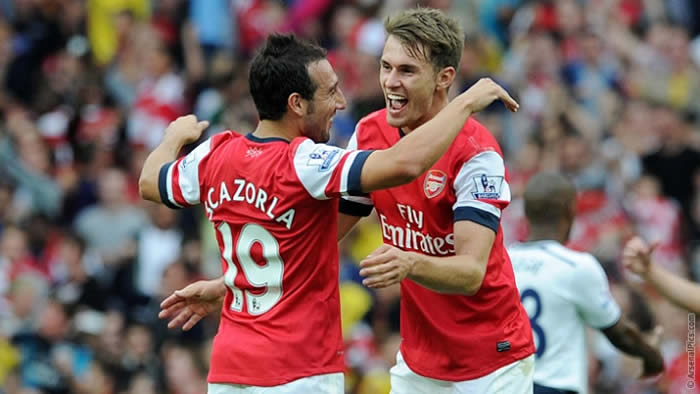 It’s a relatively quiet week as we move from one London derby to another. There’s only so much you can say about a hilarious win at White Hart Lane, and with English clubs involved in midweek Champions League action that kinda takes the focus away from us.

All the same, there was good news yesterday as the club confirmed that Aaron Ramsey and Santi Cazorla had signed new deals with the club, while youngster Gedion Zelalem has penned his first professional contract. As usual, they all had good things to say.

I’m so happy to have signed a new contract with Arsenal. This club makes me very happy – the manager, my team-mates, the fantastic supporters, the stadium and the whole organisation here. I have had a great time with the club since joining nearly two years ago, and I think that we can be a big player in competing for the top trophies in years to come and that’s important for me.

I feel like there’s plenty more to come. This season I’ve proven a lot of people wrong. Hopefully now I can get back out onto that pitch as quickly as possible and show what I’m capable of doing and hopefully finish off the season in some style as well.

Cazorla and Ramsey are absolutely key players for us, and this news is a boost to the whole club. Gedion is very young of course, but he has shown already that he has fantastic promise, and we all look forward to his development with us.

So, it’s good news. To ensure the futures of two players of that stature is fantastic, particularly after all the other extensions we’ve nailed down over the last 12 months or so. Next up Koscielny, so they say, and that’s one I think everybody would want to see too (his last extension was in 2012). We’ve done a very good job of tying down the core of this team, so credit to the club for that.

Of course there’s the inevitable ‘But what about Sagna?’ reaction to news like this, but what I think the last little while has shown – with new deals for Mertesacker, Rosicky, Szczesny, all the British players, Theo Walcott and beyond – is that the club are more than capable of extending contracts when there’s a will on both sides to do that.

I love Bacary Sagna and all he’s brought to the team since he arrived, but maybe we have to accept the fact that he might be the one who wants to move on this summer, rather than Arsenal not trying everything they can to keep him at the club. It’d be great if he stayed, but I think it’s very, very unlikely now.

The other elephant in the room, so to speak, is the manager’s contract. It seems Arsenal jumped the gun by publicly declaring that he’d stay with the club, and the longer it goes on, the more you have to think him not signing that extension is a possibility. Maybe he’s simply waiting for the end of the season to see how things play out. Maybe he’s waiting to see if he can win that elusive trophy before committing again.

But maybe he might look at the overall situation, trophy or not, and think it’s a good time to try something new himself. He could say, “I’ve guided you through difficult times financially, kept the team in the Champions League throughout that period, 95% of the club’s best players are tied down to new, long term contracts, the club is great financial shape, new sponsorship deals mean we’ve moved into a new world of transfers where we can compete for the best players in the world, and it’s all set up for the new man to take advantage. Thank you, and good luck.”

I’m not saying that’s what’s going to happen, but it’s not beyond the realms of possibility, is it? Even without another trophy, you’d have to say he’d have left in Arsenal in far better shape than he found it. A new stadium, financially secure – indeed, profitable – in an era when most clubs play a daily game of debt management just to stay afloat, and a squad of excellent players with a great mix of youth and experience.

Don’t we have to consider all the eventualities? Some might say Arsene is self-aware enough not to sign a new contract when we’ve yet to win anything, but by that rationale he’s aware of the difficult times he’s had and the fact that some sections of the fans would like to see a change. Maybe he does too.

It’s all speculation on my part, obviously, but I just wonder if the manager’s future is as cut and dried as the executives at the club seem to think it. His contract expires in three months time, I can’t ever remember it getting to this point before (although I have a vague recollection of a deal very close to a summer expiration some years ago). There might be big clubs looking for a new boss this summer, a certain Catalan behemoth springs to mind, and perhaps that might be tempting. Do the club have a contingency plan of any kind?

Small update: many people asking if these players would commit if they thought the manager was leaving. My view is that the players’ commitment should be first and foremost to the club, then the manager. I think Arsene would insist on that also, and what they do is not really contingent on his plans in any way.

Anyway, it’s worth thinking about and gives us something to chew on throughout the day. Whatever happens, Arsene’s commitment between now and the end of the season is without question, and with his 1000th game in charge approaching this weekend, a win at Stamford Bridge would be a glorious way to mark that remarkable milestone.