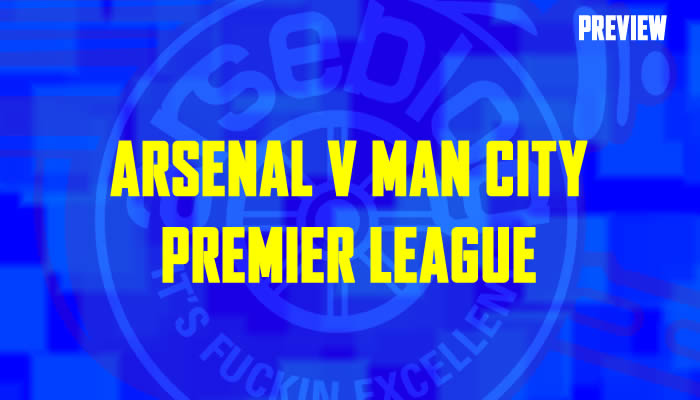 After the week we’ve had Man City are probably the last team you’d want to be playing today. I suppose the good thing is that it’s at home and it’s not at 12.45.

Small crumbs of comfort, but perhaps enough to build something on. I have to say, however, I’ve rarely been this pessimistic about getting a result before. Even if the odds are stacked against us, I can usually see how we could get three points from a game, but with confidence, belief, form and energy so low, and with City buzzing after a derby win, it’s hard to look beyond them today.

I know it’s not impossible for us to do it, that’s the beauty of football. This team is capable of a lot better than what we’ve been served up in the last week, and if they get an early goal and get some confidence back, then anything could happen. That said, if you offered me a draw right now I’d take it without having to think about it too long.

As I mentioned in yesterday’s Arsecast we need to look at what we have available to us in terms of the playing squad and consider our approach to this game. Do we have enough attacking verve to have a real go at Man City? No, I don’t think we do. Therefore we should go into this one thinking ‘First, we do not lose.’

We’ve done it before. In Munich last season, and throughout that butt-clenching run-in which secured Champions League football at the expense of Sp*rs. The team was at a low ebb then too, but playing that way allowed us to grind out the results we needed.

Although we’re in a much healthier position this time around we’re, perhaps, in a worse funk, which is a bit weird when you think about it – but then getting spanked by Chelsea will do that. Not to mention the other heavy defeats we’ve suffered this season and, of course, not forgetting one of them came at the hands of Man City. At least that day we were much more in the game than at Stamford Bridge and Anfield.

We scored three times and some late goals made the scoreline look a bit weirder. That’s not to say it wasn’t a painful defeat, but in terms of the circumstances and the performance it was different to the other two. But with those games in mind, you have to think Man City will try and exploit our tendency to concede early and lose confidence because of that. They know if they can score in the opening period it’ll make our job even more difficult, so we have to make sure that as a team we defend properly.

We can’t let full backs saunter forward, as on Tuesday night, to put in inviting crosses because if Swansea have the quality to punish that, then you can be quite sure City do. If we lose our shape, discipline or concentration, they’ll take advantage of that, and the manager has hinted that this side of our game is going to be key today, at the same time acknowledging their attacking prowess:

They have a fantastic attacking force with many creative players. Certainly the quality of our defensive performance will be very important on Saturday.

But it is the only way I think we’re going to get something from today’s game. It’s interesting too because if City do have a weakness it’s at the back, but we can’t go on an all out assault. That will, I’m sure, end in disaster. Maybe like the game a few seasons ago, we keep it tight, dig in, and try and nick a goal.

In terms of the team, I don’t really see how we can change much. I’d be tempted to give Kallstrom a start in midfield but that could just be because he’s something a bit new and different. All the same, he’s bound to be a bit fresher than the others, but I really haven’t seen enough of him to say with any certainty which midfield role he’d fit best.

Most of all though, I just want to see these Arsenal players perform and put in a shift for each other and for the shirt. They’re hardly unaware of how the last week has affected the fans, but we need to see that it’s affected them too. ‘Professional pride’, as well as Premier League points are at stake, so fingers crossed that provides the bit extra in the legs that we’re going to need today.

As usual, we’ll have full live blog coverage of this game for you. Check back later for a post with all the details, or simply bookmark our default live blog page and updates will begin automatically.

Until later, and come on you reds.