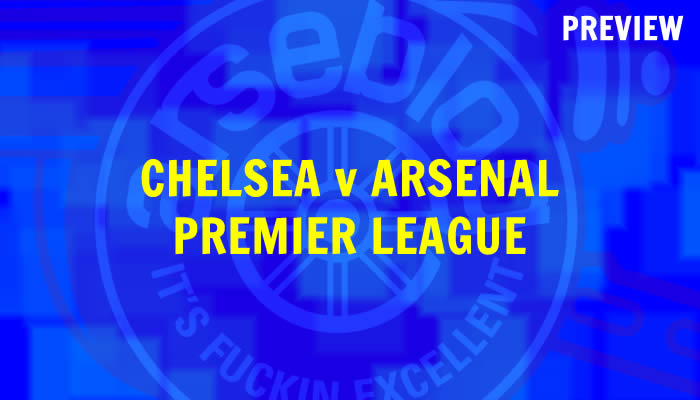 After all the talk of Arsene’s 1000th game, now comes to the time to play it.

The tributes paid to him have been fun and interesting, but in some ways they’ve taken some of the heat off the build-up to this game. It’s not for nothing that the manager has called it the most important game of the season. We’re still in the title race – but our continued involvement in it is predicated on a good result at Stamford Bridge today.

Lose, and you have to think that’s that in terms of the Premier League. It wouldn’t be arithmetically impossible, of course, but with just 9 games to go it would be tough to claw back 7 points on Chelsea, even with our game in hand. Win, we put some pressure on them as well as City and Liverpool who have yet to play.

There’s enough going on in this fixture anyway, but obviously yesterday Sky wanted the narrative to be about the two managers and the recent comments made by Mourinho. Arsene was asked about them at his press conference, and said:

On Saturday I represent my club, I don’t represent myself, and I will behave always in respecting the values of our club, and keep my own feelings far away from that.

And even Mourinho, despite being unable to get the odd dig in here and there, said much the same:

It’s Arsenal v Chelsea, not me against him. Records don’t play any role – a match is a match. It’s not coach against coach, it’s team against team.

The difference, to my mind at least, is that Wenger is absolutely genuine, whereas Mourinho thoroughly enjoys making it all about him. Even when the cowardly Ramires was rightly sent-off for a two footed stamp on a Villa player, it became about the Portuguese as he was sent off as well. Some might say it’s clever, he took the heat off the Brazilian to an extent because it was a thoroughly despicable foul, but I believe it’s just his nature to ensure he’s at the centre of everything. Does any other manager creep onto the pitch as much as he does?

And look, his participation in this certainly adds some spice for me. I don’t need any extra motivation to want us to beat Chelsea. The idea of losing to a team captained by a man as appalling as John Terry is enough on its own, especially in a season like this when points are so valuable, but there’s nothing about Mourinho I like, and even less the sycophantic, fawning reaction of the press pack to his behaviour which, at times, borders on sociopathic.

There’s a lot to play for from a football point of view, of course, and that’s the single most important thing today: but there’s something extra special about beating the things you dislike. Hence the longer-lasting warm glow of a tight 1-0 North London derby win compared to the 4-1 bashing of Everton whose manager seems a very decent chap and who, as a club, aren’t the equivalent of smallpox in babies.

In terms of the team today, there’s a doubt over Rosicky because of an ankle problem but he looked like he took a full part in training (at least as far as the pictures show us), and I wouldn’t be surprised to see the same XI as started at White Hart Lane. That said, I think we’re going to have to play considerably better if we want to get the right result today.

Chelsea certainly have more players who can hurt us than Sp*rs do and while it’s great to see a magnificent defensive performance from time to time, you don’t want to sit through that every week. The other thing to consider today is whether or not there’s a kind of psychological barrier when we go away from home against the big teams. We’ve lost away at Man City, Liverpool and even Manchester United, so rightly enough, questions will be asked if we can’t get something from today’s game.

It would be a marvellous thing for Arsene Wenger to lead his team to victory today, given the landmark, but in the end it’s just another game. Its importance comes from what it means to the title race, not the arbitrary timing of it. It would add a little to the celebration if we could do it – inflicting a first league defeat at Stamford Bridge on Mourinho in the process – but it’s just a little sidebar to the main event.

It’s hard to know which way it’s going to go, and I have to say I’m as nervous as I’ve been all season before a game. I hope we turn up, get into the game early, and keep our championship hopes alive. I also hope for a sinkhole in the Chelsea penalty area which sees John Terry plummet towards the molten core of the earth. That last one might be pushing it, but if we can start like we did against Sp*rs, then who knows?!

Our last three results, the wins over Sp*rs and Everton, and the draw away in Munich, have provided us with a bit of momentum and belief, so let’s hope we can take that into today, and get the right result.

Remember, if you can’t see the game, we’ll have full live blog coverage for you. Every kick, every moment, and hopefully every Mourinho tantrum from first whistle to last. It works on desktop, mobile, tablet and anything else you might have. Check back later for another post with all the details, or simply bookmark our default live blog page and updates will begin automatically.

Right, time for some breakfast, and then the game.

Torreira should start in midfield rejig, but what else will Emery change for Chelsea?