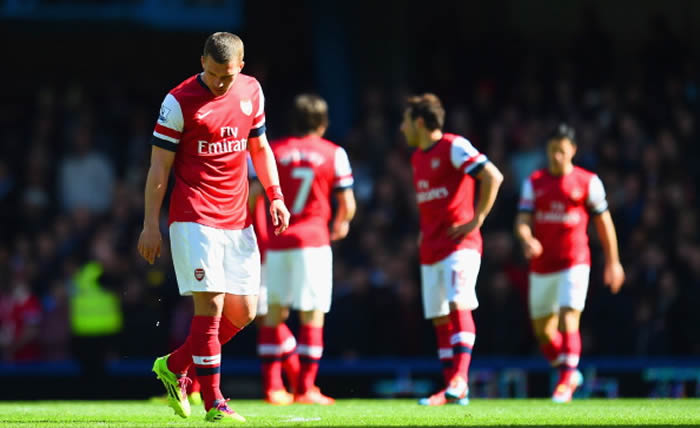 Match report – By the numbers – Player ratings – The Guff

When you support a football club for a long time you experience many things. Good times, bad times; joy and sadness; fun and misery; good results, bad results – but yesterday, for me at least, was a result and performance that goes right up there with the very worst I’ve seen. Worse, by a long way, than the 8-2 at Old Trafford; worse than the 6-1 at the same ground, up there with any cup final defeat in terms of how it made me feel afterwards, and how bitterly ironic is it that Arsene’s 1000th game was marked with possibly the worst performance of his entire reign?

It was, frankly, embarrassing. Against a team for whom we were supposedly fighting for the title, we self-destructed on a massive scale. The fact it was against Chelsea makes it worse, for sure, but when we wanted our team to stand up and be counted they buckled instead. The pressure was on, we cracked, and not for the first time this season.

You can almost make sense of a game like the one at Man City when you lose 6-3 because you say ‘These crazy things happen in football from time to time’. When it happens at Liverpool you start to worry because it might speak to an underlying flaw. And for it to happen again, at Stamford Bridge, the way it did yesterday, means you can’t do anything about it other than impotently rage or freak out because a team that can lose like that three times in one season is a team that can make a bollix of anything.

I’m not good with rage, it’s unhealthy, but I’m very, very worried about what I saw yesterday and what it means. Hindsight is great and I said on yesterday’s blog I thought Arsene Wenger would pick the same team as White Hart Lane, but our approach to this game was wrong. The best thing about this Arsenal team over the last 12-15 months has been the ability to dig in and get good results because of our excellent defensive platform.

We turned to that style because there was an acceptance on the part of the manager that we could not play the open, attacking football he likes to play. It was common sense, and it worked. So why he thought we could go to Chelsea and take them on without Ramsey, Ozil, Walcott and Wilshere is beyond me. Oxlade-Chamberlain in the centre of midfield is interesting, but the young man is still raw and still learning, and against a team as experienced and wily as Chelsea, he was utterly exposed.

But even taking that into account our biggest issue was the fact we made sloppy individual errors which led to their goals. Like at Anfield we were ruthlessly punished, but that’s a fact of life at the top of the game. If you mess up, chances are you’re going to be punished. Oxlade-Chamberlain lost the ball for the first goal, Cazorla lost it for the second, Cazorla was robbed for the move which led to the handball/penalty (more on that later), for the fourth Koscielny was bypassed far too easily, the fifth came from a misplaced Rosicky pass compounded by a goalkeeping error, and for the sixth we got caught playing a high defensive line which allowed their player to run into acres of space.

5-0 down, with 10 men, and leaving that gap behind?! A goal does not restore any pride. We don’t need to see defenders bombing up-field. We want to make sure that first and foremost we don’t concede any more goals to a team like Chelsea and a manager like Mourinho.

Normally after a game you can find some crumb of positivity, a silver-lining along the way, but not yesterday. It has nothing to do with it being a 12.45 kick-off, it has everything to do with the fact we have a serious issue when we face the big teams in this league. At home it’s not so bad, away from home we go to pieces and it’s just not good enough.

A team that can beat Liverpool twice at home and get spanked 5-1 at Anfield is a team that struggles with more than 11 v 11. Overall, there’s no real gulf in quality between the two sides, so where’s the difference? It must be psychological, in the mind. Is there something amiss in our preparation? Why is it that in these away encounters good players become jittery and make basic mistakes that they don’t in other games?

The players will say they’ve let the manager down, the manager has already come out to take full responsibility, and ultimately the buck stops with him. While he can’t legislate for Oxlade-Chamberlain giving the ball away under no pressure at all, he has to look at the way we’re set up for these games. Mistakes like that, and the ones that led to the other goals, generally come from the focus/concentration not being right. It’s his job to get his players prepared physically, tactically and mentally for every game, and yesterday neither he nor his players did their jobs well enough.

That this has happened three times this season is not coincidence. It’s no longer a freakish occurrence. Away from home against City, Liverpool and now Chelsea, we’ve conceded 17 goals. Read that and weep. There’s simply no way to rationalise that beyond us not being good enough to compete properly in these games. And it’s not down simply to the calibre of players. It’s too easy to write them all off and say they’re the problem. Of course we can improve our squad, but these same players have, as I mentioned, beaten Liverpool twice, beaten Dortmund away, drawn away at Bayern Munich, drawn with Chelsea at home and so on.

Days like yesterday are why I worry about the FA Cup this season. It’s not really the quality of the opposition that’s our issue, but the inability to cope with the occasion. We knew yesterday a win would keep our title chances alive. We knew how important the game was. And our response was to present the game to Chelsea, gift-wrapped, with a nice little bow.

Now, our title hopes are dead and buried, forget about it. It was always an outside chance, in fairness, but it’s done and dusted now. Not only did we dig our own grave, we picked out the coffin, the flowers, the hymns and the headstone.

So what’s to say, in a cup semi-final, with even more pressure than ever before on the manager and the players, that we won’t react in the same way? Maybe I’m worrying too much, but after what I saw yesterday I wouldn’t put anything past this team. There’s a lot to like about them, and much of what they’ve done this season has been positive, but when it’s been bad, it’s been really, really bad, and it’s a cause for huge concern.

Do we now have the ability to cope with the implications of this shit-fest? Whichever way you look at it, defeats like yesterday on top of the ones at Anfield and Man City, have to have a damaging effect on the squad. Once you can put it behind you, twice you worry it might happen again, but three times must sap belief and confidence – in themselves, in the way they’re being asked to play, everything.

I’m too long in the tooth to get hugely upset by losing games. I’ve seen it enough times to be able to compartmentalise it, and I’ve always said I can live with it as long as I can see we’ve done our best. Sometimes you just have to hold your hands up and say the other team was better. Not yesterday though. It hurts because we failed do ourselves justice in any way. We were masters of our own destruction, from manager to players, and to give up on a title challenge in that way – which is basically what we did – stings badly.

There’s nothing to say this morning about the next game or picking ourselves up and moving on. Only an acceptance that as things stand we’re not a team capable of winning the league, and when you look at the position we were in a few short weeks back, that makes it even worse. Without the pressure of expectation we were able flourish for a time, as soon as that burden arrived we began our slow, inexorable crumple.

I know there are some mitigating circumstances. Too many of our best attacking players are absent, too many of the men who could make a difference are sidelined through injury, but those players being missing yesterday don’t explain a 6-0 thrashing. It’s more difficult to win without them, but it shouldn’t be that easy to lose.

Ultimately all of our shortcomings were ruthlessly exposed, and those shortcomings are entirely of our own making.

Finally, just to touch on the Oxlade-Chamberlain/Gibbs incident. Firstly it’s simply ludicrous that the wrong player can be sent off in 2014, especially when he’s been told by the player who actually committed the offence that he’d got it wrong.

But more than that, I think we need a much more detailed explanation from the referee about his this whole thing went down. ‘A case of mistaken identity’ is not good enough. If you look at the incident Marriner walks away waiting for an Arsenal goal kick. His linesman does not signal to suggest he’s seen anything untoward. All of a sudden the ref comes back and then sends off the wrong player for an incident he’s seen clearly, but in which he saw nothing wrong.

Where did that information come from? Was he being fed it from the sideline, or from another source? The fourth official? And if it was based on video replays, how did they still manage to send off Gibbs?

Arsenal had already made the game more or less safe for Chelsea at that point, so it’s not to suggest the referee’s decision had a bearing on the result, but this was such a clusterfuck of wrongness that we need to know exactly how it happened so we can make sure it doesn’t happen again.

Marriner and his officiating team should be demoted for this one, and big questions need to be asked once more about why the standard of refereeing this season has been so poor. Yes they have a tough job but they’re professionals and they’re getting worse. Incidents like yesterday damage the credibility of the game, and fans (not just Arsenal) deserve a proper explanation.

Right, have a good Sunday, back tomorrow with an Arsecast Extra when we’ll try and make more sense of what happened at Stamford Bridge (if possible).