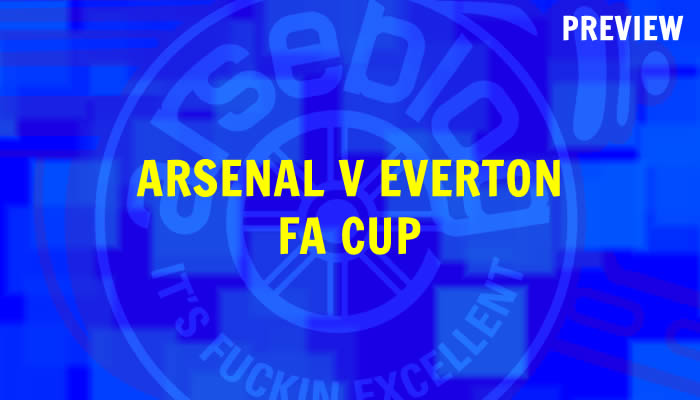 It’s hard not to think that this one game is close to being make or break for our season. We’re still in with a shout in the Premier League, as things stand right now, and we’re not out of Europe (yet), but this is certainly a match that will set the mood.

Win and we’ve got a cup semi-final on our hands, things remain positive as long as that trophy is still in our sights. Lose and everything else will become impossible. The league fixtures too difficult, the trip to Bayern pointless etc. Of course it’s not that extreme, but to my mind there’s no doubt the cup represents our best chance of winning something this season.

It’s vital. That’s how important it is. Yes, we want to win and we are in a position where we can do it. The first priority is always to do well in the Premier League. The FA Cup is our absolute priority just because it is our next game.

There are likely to be changes to the team today. Obviously there’s no Jack Wilshere, while there’s still a ‘doubt’ over Laurent Koscielny’s hamstring. Given how important he’s going to be over the final months of the season, it’s surely not worth taking any kind of risk with him, especially as Thomas Vermaelen is fit again. He can deputise there and, like Koscielny, his game tends to work best alongside Per Mertesacker.

In the absence of Wilshere from midfield, and with Ramsey and Kallstrom still a week away from being available, I’d play Flamini alongside Arteta. We missed his aggression against Stoke and despite the fact Everton play football they’re no shrinking violets in that midfield area.

Mesut Ozil must come back into the team in the central attacking midfield role. Outside him Santi Cazorla on the left, and on the right Alex Oxlade-Chamberlain. The threat of his pace and his ability to get behind defences is going to be hugely important, I think, and the busier we keep Leighton Baines the better. Giroud should continue as the striker but a stronger all round performance is required.

The only one I can’t quite figure out is what he’s going to do in terms of the keeper. Wojciech Szczesny is suspended for the trip to Munich and Fabianski is, ostensibly, our cup keeper. A game today would warm him up for the Champions League, and his performance against Liverpool in the last round played a big part in getting us here today.

But, Szczesny is the better keeper. He’s the one the manager trusts week in, week out, so you could make a very good case for him to start today. The longer the competition goes on, and the more important the games become, the more this is an issue that has to be addressed. I thought it was weird the other day when Man City played Bob Papillon in the Capital One Cup final against Sunderland when their number 1 was sitting on the bench.

If you get to a final you play your best possible team, and working back from that you could say to get to a final you should do the same. I suspect he’ll go with Fabianski today, but I hope that it’s Szczesny on the bench and not Viviano. This game is just too important not to take it as seriously as possible.

We have to see a response to the insipid attacking display we were treated to in the Stoke game. I’m hoping the return of Ozil and the deployment of the Ox in a wide area might be the things to spark us back into life – as well as the players’ desire to make-up for what was a miserable performance at the Brittania. There’s no making up points if today doesn’t go well, so the pressure’s on a bit, and we need to respond.

We’re one game away from Wembley, that’s exciting and of course the team is well up for it.

Good to hear, but so will our opponents. Martinez brought Wigan all the way last season and I’m sure he’ll fancy his chances again this time around. He’s never been a respecter of the opposition with regard to how his teams play. He’s always sent them out to have a go, and it worked for Wigan in the cup last season, and they had success against us at home too in the Premier League in times past.

With a bigger club and better players, that philosophy won’t change one bit, and as we saw from the league game earlier in the season, Everton are more than capable of giving us a very difficult time. They were outstanding in the first half, in particular, and although it’s a game we probably should have won given how late we scored, they fought back.

There’s plenty we can learn from that day; there’s plenty to put right from our last outing; and there’s so much at stake today that I hope we respond and properly. This is a team that has done most things right this season, it’s just that the disappointing days have felt worse circumstantially.

Today is a chance to get to a semi-final, lift the mood, and give ourselves a great boost going into what’s sure to be the most difficult period of the season.

Remember, if you can’t see the game we’ll have full live blog coverage for you. Simply check back here later for a post with all the details our bookmark our default live blog page, updates begin automatically.

Time to walk a German Shepherd. Catch you for the match.