AND so we return home from Bavaria, once again we exeunt stage left. Returning home is of course something our friend Uli Hoeness will not be able to do for some time, as he has been sent to spend some time at The Kaiser’s pleasure for tax evasion. He should be on guard whilst incarcerated; for as every schoolboy knows (ladies, please avert thine eyes), in a German nick, they hang you by the dick. They do by all accounts draw dirty pictures on the wall, and you are quite free to fart all day, but you shall never get away. But of all the grotesque humiliations Herr Hoeness will suffer, perhaps it is the mice playing snooker with his balls that will hurt the most. Our thoughts are with him.

Our thoughts are not, however, with that villainous, flap-mouthed, unwashed whoreson Herr Robben. It is a paradox that he has won so many Dutch caps and yet the world would have been spared his odious antics if only his dear mother had worn one. As is the modern fashion, we must take the positives out of the match. Why, pray tell? Is this? In my day, after a defeat, the manager would scream himself hoarse, and would not be spoken back to for several days. The weaknesses, inability, general uselessness and complete incompetence of whichever Arsenal players had been playing were repeated, endlessly. It worked. It was like the modern-day ‘hairdryer’ treatment, but like a blowtorch that would not be turned off. This modern affectation of positivity is grating. Yet there were good things to take from the rubber.

Chief among them is that we shall not have to witness the cheating, diving, fraudulent deception and hateful, reptilian visage for at least some months. Also, Mr. Flapplesthwaite is proving a sturdy stand-in at Glove Butler, and it was a joyous moment indeed when he repelled Herr Muller’s kick from the dinner plate. Mr. Ponsonby’s retort to Munich’s goal was wonderful, but we are left to wonder what might have been if Munich weren’t such a gang of toad-spotted varlets.  We do not wish them well in the next round. We wish them to be thoroughly thrashed until they weep. 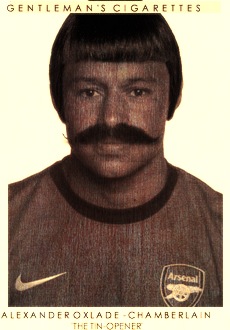 Isn’t young Master Oxlade-Chamberlain, our tin-opener, quite something to behold? His charging, unfettered runs through the heart of the Hun’s midfield certainly set the pulse racing. It is the sideburn factor. I care not a jot that he has now shaved them off, they have performed the desired tonic effect and he has become Woolwich’s star player these past few weeks. His pater, who overcame the greatest hindrance to living a decent life, being born in Stoke-on-Trent, will be delighted. He seems like a lovely lad, and funny enough to make a cat laugh.

Sadly, Mr. Orwell, who was busy proving dunderheads and idiots wrong last week with his superlative league display against Everton, has twanged his hamstring, and will be unable to sit that heifer Dembele on his arse this coming Sunday. He shall be missed, but the renewed vigour of Mr. Robinson, as well as the scampering brilliance of St. John Cousins, should see us through.

We notice this week that Arsenal fan Tim Sherwood has been what the young people call ‘coating off’ his own players. Of course he has, you cry, if we were able to get into the Spurs dressing room, we’d do the same, but this was really extraordinary stuff. As well as calling them babies, telling them via the fourth estate that they are not good enough, calling Kyle Walker a big fat lump, and so on, there were some unreported words of praise for a former Tottenham player.

“We miss Jermaine Defoe. His head was at exactly the right height to rest your pint on. If only he turned into a curry at midnight he would have been the ideal Tottenham striker.”

The annual visit to Quiet Hart Lane awaits. Do remember to get your jabs.