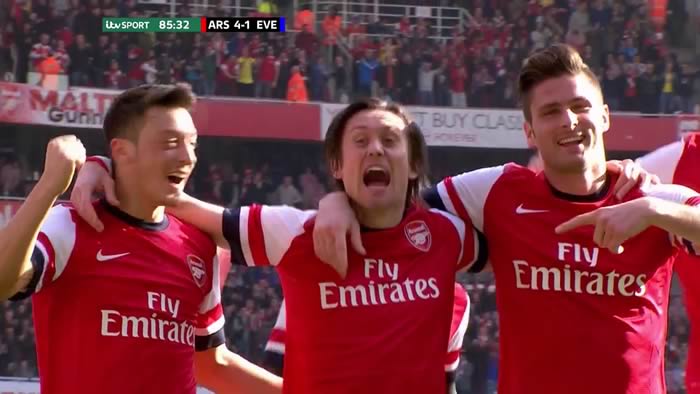 So we’re off to Wembley for an FA Cup semi-final after a cracking 4-1 win over Everton yesterday. The scoreline was a touch flattering, perhaps, and Everton played well, but at the crucial times we were able to step up and take our chances, and that made the difference.

An early goal for Mesut Ozil was just the tonic after what’s been a difficult week for the team and for him. Quite why he’s been the subject of such intense criticism is beyond me, other than it being some kind of collective mind-melt that verged on bullying at times. While most would have acknowledged he was struggling for his best form, some of the ‘analysis’ has gone way too far and it was great to see him remind people of his quality yesterday.

The goal was delicious. A perfectly weighted Santi Cazorla pass found Ozil’s perfectly timed run, and the finish, with two defenders leaping at him, was coolness personified. His clenched fist after he he got up (the two defenders clobbered him just as he hit the ball) showed how much that goal meant to him. He was always going to come good again, yesterday was that day.

With Alex Oxlade-Chamberlain rampaging (the best word I can think of) around the pitch, to great effect, Arsenal looked a different team than the one that faced Stoke. The young man brought everything we wanted him to: pace, drive, energy, shots, and creativity, all with a ferocious work-rate, and with Flamini and Arteta anchoring midfield well we looked more or less on top, even if the game itself was quite even.

But Everton showed their quality on the break just after an Arteta shot was blocked. Barkley raced up-field and Flamini, having just been booked, couldn’t do what he would have liked to do and stop the move early. Barkley crossed to the back post, Everton got a bit lucky as the ball rebounded to Lukaku a yard out and the score was level.

Everton’s keeper was seriously dodgy (why would he not play Tim Howard?!) but despite a series of corners we couldn’t capitalise. And as the second half progressed it looked as if Everton were beginning to find some rhythm. Helped by an unfortunate Vermaelen slip, Lukaku fed Barkley in the box and we should have been behind, but the finish was, thankfully, off target.

It sparked a change from Arsene Wenger, with Olivier Giroud replacing Yaya Sanogo, and from that point I think we got on top of the game. Great running from Oxlade-Chamberlain won us a penalty when he was fouled by Barry, and Mikel Arteta duly dispatched the spot-kick without fuss. But, bizarrely, Mark Clattenburg made him take it again and booked Giroud for encroachment. I don’t think I’ve ever seen a player booked for that before, and if you look at it again, he’s clearly being hauled back by McCarthy so it should have been a double penalty, no comebacks.

Arteta had to do it all over again, and it was no fuss to him. He went a different direction this time but the power and placement of the shot high into the net gave the keeper no chance. Everton made a couple of subs, Arsene brought on Tomas Rosicky for the spent Ox, probably with the intention of using his experience and energy to shore things up.

Instead, Rosicky was heavily involved in two more Arsenal goals. For the third he played Sagna down the line, the right back getting into the box and waiting for Giroud to find space. He did, Sagna clipped the ball into him with such pace that he just had to direct in at the near post to make it 3-1. It looked simple, but it was a fine goal.

And when Santi Cazorla crunched McGeady in the tackle deep in our half and set Rosicky scampering away down the right, you could see Arsenal’s attacking verve had returned. Ozil ran into space behind, taking defenders with him so when Rosicky’s pass arrived he just squared it for Giroud to slide home his 18th goal of the season.

Everton were done, Arsenal deservedly through to the next round. As I said, perhaps with a little more gloss than the entire game suggested, but that’s what taking your chances and being a bit ruthless does to the scoreline. Afterwards, Arsene said:

We had a quality performance from the first to the last minute against a good side. The first half was all us and we were unlucky to be 1-1 at half time. The second half, Everton started well and had a good moment in the game where they had the chance with Barkley. We scored the second goal and then controlled the game well. We always looked like we could score more.

And touched on the performance of Mesut Ozil, saying:

What I liked with him is that physically he looked regenerated, having more power in his runs. As well I liked that he did a lot of dirty work for a player like him, that means he tracked back in the first half – especially on the counter attack he came back with long runs. When he behaves like that of course you have a better chance to win the game.

Hopefully it is the kick-start his season needs, because not everyone will have forgotten (or chosen to forget) how effective he was in the first part of the season. With Ramsey on his way back, Giroud firing again, Rosicky full of beans and Cazorla playing as well as he is then there’s some fun to be had if we can make all that click again.

Overall we got exactly what we wanted from yesterday. A win, first and foremost, but also a performance that would help banish the demons of that miserable Stoke afternoon. If that was grisly black and white, this was glorious technicolour, with lots of positives to take – especially when you consider what’s to come this week, in Europe, and what lies ahead domestically for the rest of this month.

We had to win but we also had to restore some confidence and some belief, and I think thumping a side as good as Everton 4-1 will have done exactly that. We can look into that, and the game itself, in a bit more depth in this week’s Arsecast Extra which myself and Gunnerblog will be recording later on.

For now though, the sun in shining, it’s not cold or wet, and Arsenal will be at Wembley to get to Wembley proper. Can’t ask for more than that this morning.