Midway through the first-half, Tony Pulis pulled up his captain and berated him for letting Alex Oxlade-Chamberlain make a run behind him. Crystal Palace had defended superbly up until then by not giving Arsenal any space and Pulis understandably, was determined not to let the standards slip. Mile Jedinak’s reaction, though unsophisticated as it may have been, highlighted the mental effort exerted playing such a way.

“What? F*cking hell,” he barked when he heard Pulis’s demands. It wouldn’t be the last time Oxlade-Chamberlain would slip through – actually, he would get through two more times, and both times proved fatal to Palace as his two goals gave Arsenal a priceless 2-0 win.

Against Crystal Palace, Alex Oxlade-Chamberlain was given the chance to start in central midfield due to the unavailability of key personnel, and he shone, not only by scoring the two goals, but showing the maturity and sensibility of a seasoned midfielder. Before the clash, Arsene Wenger had thrown down the gauntlet to Oxlade-Chamberlain, claiming that he had the capacity to develop into a Steven Gerrard-type midfielder, but there was none of the gay abandoned that makes up the charm of the Liverpool skipper.

Instead, he got forward at the right moments, impressively taking advantage when others moved out of their positions. For the first-goal, Lukas Podolski narrowed, creating an overload in the centre which allowed Oxlade-Chamberlain to burst forward into the space that the German would typically be. When the ball fell to him, he even finished with his left-foot. 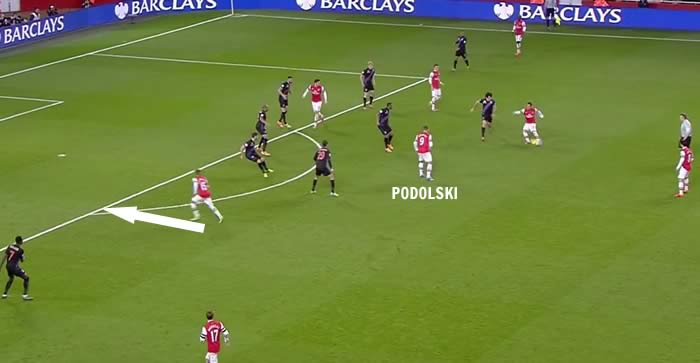 The second-goal was more Santi Cazorla-like, sensing the opportunity again to move wide when Tomas Rosicky cut inside with the ball, playing a nice give-and-go with Olivier Giroud before shooting from the edge of the area (just as Cazorla did against Fulham).

Oxlade-Chamberlain’s impact was all the more impressive because for much of the first-half, Arsenal were looking for somebody to switch the tempo of their attacks, and he duly provided, scoring his first only a minute after the break. In truth, Arsenal weren’t in so much of a hurry as their game this season is predicated on keeping a clean-sheet as long as possible thus setting the platform for a late(ish) win, but it would show just as much of a lack of ambition as Crystal Palace had Arsenal not shown more urgency with the possession that they were granted.

Arsenal’s main problem in the first-half was that there was simply a lack of runners behind in the absence of Theo Walcott. Arsenal’s modus operandi, when the winger-cum-striker has been unavailable, is to play the ball up to Olivier Giroud and use him as a pivot to bounce passes off. To be fair, Arsenal did create a couple of openings in that way, but they were quickly snuffed out. Instead, The Gunners best chance in the first-period came to Nacho Monreal, who actually did make one of those darting runs behind, from probably the only time Arsenal were able to quickly switch play.

That was compounded by the fact that Arsenal’s attacked also narrowed too quickly, with Podolski most culpable as the “wide striker” and they ended up playing the first-half in the between the width of Crystal Palace’s penalty area. The basic tenets of attacking football – or Total Football – is to stretch the pitch when attacking but with the two wide players tucking in early, it funnelled attacks to the centre where Crystal Palace were most organised.

Thankfully in the second-half, instantly there was an increase in urgency that was lacking in the first. Once again, Podolski narrowed early but that was okay because Arsenal had moved the ball well enough and worked it wide that it created the space on the other side for Oxlade-Chamberlain to run into. Indeed, Arsenal playing well is all about how they move the ball from side to side using the whole width of the pitch, and then suddenly outnumbering the opposition with quick interchanges. Their two best performances have come that way – the 2-0 wins against Liverpool and Napoli.

Mesut Ozil instigates much of those exchanges but throughout his time at Real Madrid, he’s had players who could make runs beyond: Cristiano Ronaldo, Gonzalo Higuain and Sami Khedira. It goes without saying he misses Aaron Ramsey and Theo Walcott. In the second-half, Lukas Podolski was more effective when he hugged the touchline before cutting inside and playing quick give-and-goes into the penalty area: the chances he had came that way. Similarly, Santi Cazorla, by stretching the pitch on the right, was able to find Oxlade-Chamberlain for the first goal with the quick switch of play that he’s always looking for.

In the end, it was probably apt that Alex Oxlade-Chamberlain was the difference. Before the game, Wenger talked about the challenge of breaking down deep-lying defences and Oxlade-Chamberlain, starting 10m or so deeper, meant that he had more time and space to assess the game, to measure his passes perfectly and crucially, time his runs into the six-yard box. Indeed, his predicted influence on the game wasn’t lost on Tony Pulis who gave him the biggest compliment of all by asking Marouanne Chamakh to man-mark him when out of possession. But of course, no striker, not even those with the filibustering qualities of Chamakh would mark that far, and Oxlade-Chamberlain cleverly sensed that, often bursting between-the-lines to create clever angles to receive the ball. His defensive work was almost as impressive, while he also used his muscular frame to good effect when covering or ushering the ball to team-mates or into touch.

Against Southampton, when Arsenal paired Flamini with Arteta, the problem was there wasn’t a midfielder who was comfortable pushing out to press or join in attacks. Oxlade-Chamberlain, like Wilshere and Ramsey, has the fitness levels and the all-round game to excel in the role, and when Arsenal lose the ball, the intensity to get back. Indeed, Oxlade-Chamberlain’s experience as winger may do that part of his game extra good as he says playing “on the wing, mostly what you do is sprint, recover, sprint, recover.”

With the way Arsenal’s number 8 is asked to push out and then run back quickly to get into shape if they lose the ball, Oxlade-Chamberlain should suit the role perfectly.