Talk of vengeance makes great copy but in reality, managers are keen to avoid such narratives pre-match as it is thought too much adrenaline can create tactical anarchy. However, it’s unlikely that Arsenal would have produced such a focused and committed performance as they did in their 2-1 FA Cup win on Sunday had revenge not been fresh in their minds. It helped that Arsenal had only a week to “get over” the 5-1 evisceration by Liverpool, a defeat that could have had damaging repercussions to their season if history was anything to go by. Thankfully Arsenal reacted.

The 2007/08 season was made infamous that post-February blip that Arsenal fans have come to fear but in truth, they avoided a much larger one earlier, in 2003/04 – Arsenal’s Invincible season – when Manchester United and Chelsea dumped Arsenal out of the FA Cup and Champions League respectively. The Gunners responded in the league when Thierry Henry’s hat-trick brought Arsenal back from the brink of defeat against, what makes a nice symmetry to this season (hopefully), Liverpool.

It wasn’t just that Arsenal responded against Liverpool on Sunday, it’s the way they did, because as shown in their meek display against Manchester United, a goalless draw which was essentially a write-off, the worst that could happen is Arsenal losing confidence in the way they play. Sure, the football wasn’t as fluent as we saw earlier this season but pace was transplanted back into their approach and a feeling that they can be devastating if teams give them such space. Of course, attacking well is predicated on a solid defence and certainly that was what Mathieu Flamini in particularly provided with his tigerish attitude.

Arsene Wenger often talks about the mental strength to react but losing confidence in your technical superiority – the basis which allows Arsenal to dominate opponents – requires a different type of pick-me-up.

To explain, Emmanuel Adebayor once said that Jose Mourinho readies teams as if they are going out for war. That’s the conventional type of mental toughness. Wenger, on the other hand, is more serene, instead catering for players finding solutions naturally on the pitch and in training. Indeed, it is thought that with the attributes that Wenger holds so dear, that the team holds plenty in stock – technique, pace, skill, creativity etc. – victory should come naturally: as a direct consequence of their supposed superiority.

As a result, losing is not contemplated, so it catches everyone by surprise, sometimes leaving them almost dumbfounded. Uncertainty invades the group, resulting in a collective trauma of which there is no fallback position of which to regroup. Unless, of course, they are winning convincingly again. That’s why the Manchester United match was a write-off. It was to allow Arsenal believe once again in their way of playing. At the end of the game, Wenger was publicly indignant at Manchester United’s defensive approach but in reality, it was probably his own attempt at “mind games”, trying to instil the belief once again that his side are the better footballing team.

After the 2-1 win over Liverpool, the relief shown by the Arsenal players wasn’t one of a team that was fully confident in their abilities – there’s expected to be some residue after such a painful defeat – but any inhibitions that they can’t perform in big games are surely eroded. And they made sure that they didn’t make the same mistakes that they did in the league defeat – at least not with the same regularity. But even if they did, they had a goalkeeper in top condition to prevent the ball going in and, at the other end, the ruthlessness to put the ball in the back of the net.

Flamteta set the basis for redemption

Such was the need to react, there was no outcry about selection of the Flamini-Arteta axis, just acceptance. Arsenal lost the midfield battle last time not in terms of technical ability, but intelligence and a bit of hustle. Therefore the inclusion Flamini loses in dexterity against Wilshere, he brings in know-how and that was crucial in snuffing out Liverpool around the box. His partnership with Arteta wasn’t altogether different in theory than the other times they played with each other, but in application, it was. We saw, if you watched with keen eyes before kick-off in the 2-2 draw against Southampton, Arteta telling Flamini the need to rotate. That is when one presses, the other must drop back. In that sense, it was a bit of a compromise with both acknowledging they are stronger in front of the box and it’d be a waste if one of them sat. In reality though, you should view the way Arsenal defend in phases. 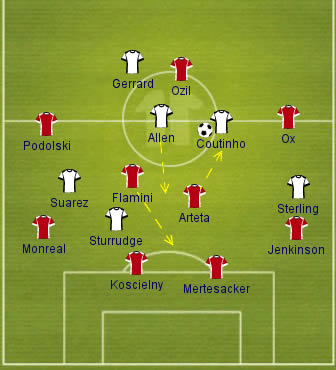 When the opponent has the ball at the back, the team defends as a 4-1-4-1 with one of the central midfielders pushing up and marking the central playmaker. Gerrard often played in between his two centre-backs – as a quarter-back if you will – too high, thus he was passed on to Ozil or Sanogo. But when he did come into midfield, and especially when the ball reached Coutinho, Flamini or Arteta would leave their position and aggressively pursue the man on the ball. They did that frequently in the first-half, harrying the Liverpool midfield, although in the second-half, and with the away side dominating, Arsenal spent most of the 45 minutes in the 2nd phase of defence, which is a much flatter 4-4-2 shape.

Of course, there were some issues, especially when neither of them pressed and Arsenal were forced to drop deep too early, forced to enter the 2nd defensive phase prematurely and it invited Liverpool on. The first chance that Steven Gerrard created was an example of that, with the Liverpool captain given too much time on the ball to play a pass through to Sturridge. His shot was saved by the feet of Lukas Fabianski. Oft-times partnerships work by habit, which can also be a detriment, but in this case it helped that both players prefer to do their best work in front of the defence and Flamini in particularl swept up a number of times when Liverpool got into dangerous positions.

Speed in attack makes all the difference

It was crucial that Arsenal got the first goal because like the league game, perhaps if Liverpool scored with one of their two early chances, Arsenal’s defence might have cracked. Certainly, The Gunners wouldn’t have been afforded the same space on the break that they did after scoring the opener. But in the period before scoring, Arsenal were growing into the better team. The more-cautious selection helped, eschewing some of the elaborate ball-possession we saw Arsenal try to attempt at Anfield. Instead, the build up was quicker, often going through the flanks especially after Liverpool lost the ball.

Alex Oxlade-Chamberlain was the key player, scoring the first goal and then assisting the second, but the other three members of the front four played their part. Yaya Sanogo not only bullied the Liverpool defence, but unlike Giroud, was never a fixed reference, instead taking up positions wide to open up space for runners. Ozil particularly relished the extra time on the ball to pick his passes the extra space gave him, finishing the game with the most passes for Arsenal. Lukas Podolski, on the other hand, is always clinical. His defensive work is often criticised and although he conceded the penalty, his intensity in the press and tracking back were impressive.

In Theo Walcott’s absence, he is the best candidate to reproduce his goals, while on the other side, Oxlade-Chamberlain’s run to set up the second showed that he can potentially match Walcott’s movement. It’s an area which Podolski can improve on too because he has a sudden burst of pace, darting into space that he doesn’t utilise near enough. As it was, he did on this occasion to great effect, scoring the winner expertly with his right foot.