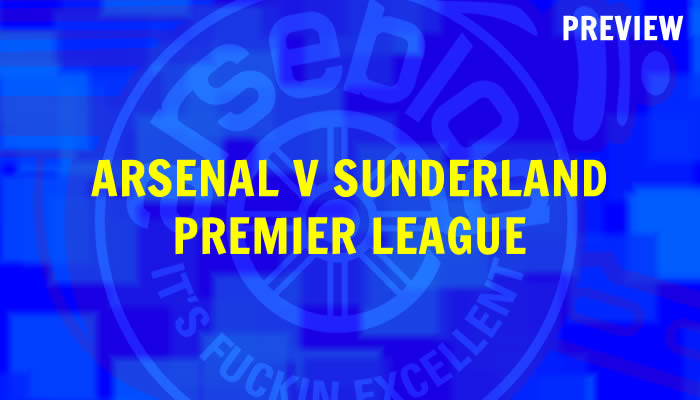 Back to Premier League action today for the first time in 10 days and it’s Sunderland coming to town.

Today’s team is one that will have some changes from the midweek slog against Bayern, with the manager being unspecific about exactly how many. Gibbs injury means Monreal will continue at left back, while you have to think the midfield is likely to contain both Arteta and Rosicky, who are fresher than the other options.

Santi Cazorla played just over half an hour in midweek and today it wouldn’t surprise me to see him start in the number 10 role with Mesut Ozil given a rest. I think there’ll be be room for Podolski today too, on the left, and I suspect Olivier Giroud will come back in up front. Arsene Wenger said he was part of the ‘refreshment plan’ for today after finding himself on the bench for the last two games.

Even if you think Sanogo has done enough to justify his selection on a purely footballing basis, I don’t think you need to be a genius to work out there has been other stuff going on which has impacted on Wenger’s decisions and today, if selected, Giroud owes his manager a big performance.

I don’t think he was playing as badly as it was made out, but there’s no doubt in my mind that with the squad we have, and the games we have left, we need him to make more of an impact between now and the end of the season if we’re going to win something. He is, basically, the main striker and we need our main striker to score more goals. Maybe after the problems he’s had, he’ll be that extra bit focused on the pitch.

On the right hand side, if not struggling with the injury Arsene said he had against Bayern, it’s got to be Oxlade-Chamberlain. Against Liverpool he provided us with pace and drive, not to mention a goal and an assist. And to me that looks a team very much capable of taking three points today.

This is Sunderland’s last game before the Capital One Cup final against Man City, so there’s a school of thought which says it’s a good time to play them. With half an eye on the final, there’ll be an unwillingness to pick up a card, or an injury, in case you miss that game and it could impact on performance. On the other hand, you’ve got players who will want to show their manager they’re worthy of a place in the Wembley team, so it could go both ways.

They look a much better side under Poyet than they did under di Canio, but I suspect that’s because Poyet isn’t actually insane. A little eccentricity goes a long way in football, but pure madness rarely ends well. They’ve won 7 of their last 10 games too, so come into this one with a bit of form. It might be a game we look at as one we should win, but it’s still one we’ll have to work hard for.

The manager has called on his team to put Bayern behind them and there can be no hangover today. I think given the circumstances of the defeat in the Champions League it’s one that’s fairly easy to compartmentalise. There’s no trauma, just some residual tiredness in legs that did a lot of chasing, but hopefully the players we’ve got coming in to freshen things up take care of that.

Elsewhere, some interesting stuff from the manager about Yaya Sanogo and his injury absence. It was, according to the boss, part of a plan to get him physically ready for English football. He said:

In pre-season I saw he was under-strength and not ready muscularly. We decided to take him completely out and try to build him up for four months – two months in France and two months with us. When he came back on January 1, I saw he was a different animal.

He talks about being willing to play a young striker too, suggesting the experience people put so much stock in is more relevant to defenders than attackers.

When I started to play Anelka, everybody said: ‘Why do you start Anelka, why not buy a striker?’ We won a championship with him. It’s just like that, if we feel they are ready then they play.

And on competition up front:

He is a similar shape to Giroud but you feel there is a lot more to come out with him. He has a lot of improving to do. But you have to be open-minded. If he does well, he will play. If he doesn’t, he won’t.

It does sound as if he’s willing to give him chances – I mean we’ve seen it this week, even if the circumstances were a little unusual – but hopefully it could develop into a very healthy situation up there. Sanogo is young and ambitious and desperate to play, Giroud now knows that he’s far from undroppable, and in the final games of the season it could prove a very positive thing.

Don’t forget, if you’re out and about early this morning the unveiling of the Dennis Bergkamp statue takes place at 11.30, and Dennis will be appearing on the pitch at half-time, so enjoy that.

If you can’t see the Sunderland fixture, we’ll have full live blog coverage of the game for you later on. It works on all your devices and keeps you right up to date. Check back later for a full post with all the details or bookmark our default live blog page and updates will begin automatically.

Time to eat some pig, walk the dog and I’ll see you back here for the match later. Come on you reds.