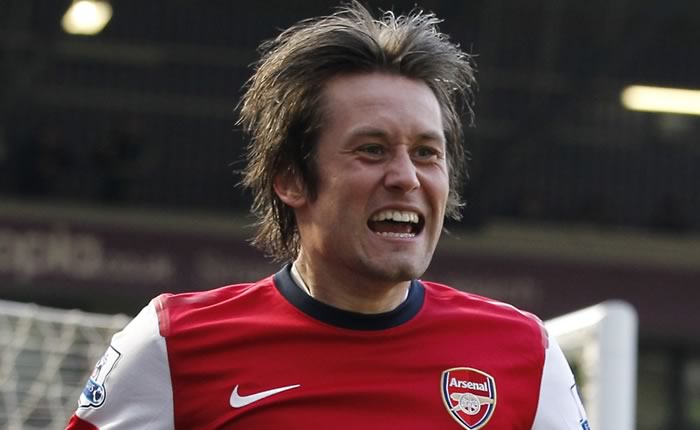 Good news to start your Monday with and that comes from Arsene Wenger who has revealed the club have reached an agreement with Tomas Rosicky over a new deal. He said:

Tomas Rosicky will stay. We have an agreement with him and it will come out soon. I am absolutely adamant he has to stay at the club.

It’s fair to say that Arsene Wenger loves Tomas Rosicky. I can’t say exactly how much but I suspect he might have had a dream that the two of them were married and he woke up thinking ‘Yeah, that could work, I guess.’

The regret that so many of us have over him is that spell he had when his freakish injury kept him out for so long, but he looks like a man determined to make up for lost time. It’s also interesting to read the manager talk about the way he’s changed his game down the years.

When he arrived, he was less a tactical player and more the Mozart from Prague. He was purely a creative, offensive player. But today, he is a real organiser as well. He gives a real structure to the team. He is one of the players who plays the game of give-and-move and he is a great accelerator of the game. He always makes things happen, not with individual dribbling but with individual acceleration of his passing and his runs.

It’s amazing to think that when we want a player to add energy and drive to our midfield, the first name we think of is the 33 year old Rosicky. It’s why I said yesterday I hope the likes of Oxlade-Chamberlain and Gnabry are paying heed to the way he plays because if they can replicate some of that it will be hugely beneficial to them.

It’s also interesting that we’re so set on keeping a player who is reaching an age when we’re normally inclined to allow to players to leave. After the game against Sunderland on Saturday, the manager drew comparisons between Rosicky and Bergkamp. High praise indeed, and while they’re clearly very different players, I think he’s looking at what Dennis did in his final years, the influence he had around the club in general as well as on the pitch, and hoping Tomas can do much the same.

We’ve long bemoaned the imbalance in the squad, the lack of experience, and now we seem to have addressed that. Perhaps there’s something to this from a financial point of view, that we can afford to keep a player like Rosicky – whose age and fitness issues mean he’s not going to play three times a week from August to May – but at the root of it is what he brings to the football team and I’m sure I’ve used the phrase ‘relentless positivity’ more than once.

He’s an example to every player in this squad, one who draws respect from all those around him, and Saturday showed – as did his brilliantly scampery goal against Sp*rs in the FA Cup – that he’s a player who still has plenty to offer.

It’s interesting to note that on Twitter people’s reaction to this is ‘What about Sagna?’, as if we haven’t been trying to extend his contract. As far as I’m aware there’s still nothing happening in that regard, and as it stands, as we reported a few days back, he’s more likely to move on than sign a new deal at this moment in time.

Hopefully that changes between now and the end of the season. Saturday was an illustration of how brilliantly versatile he is and we’ve touched on the need for experience in the squad. The main issue really is that if Bac has decided that this is his last chance to play somewhere else, in a new country, a new league etc, then it makes it almost impossible for us to keep him. Let’s see, and keep fingers crossed though.

Meanwhile, Jack Wilshere says that the pressing that worked so well against Sunderland, of which Rosicky was a key part, is something they have to continue between now and the end of the season. He said:

We have some big games coming up, we need to continue with the same work ethic off the ball, try to win it back straight away and press them. You see the best teams in the world like Barcelona and Bayern Munich do that and we have to try to do that as well, because when we get in their half we have the players to hurt them.

Sounds good, of course, but the better the opposition and the more comfortable they are on the ball, the more difficult it is to make the pressing effective. It’s easier to force Sunderland into a mistake than it is Bayern Munich, for example.

It’s also tiring so having a bit of flexibility in those key midfield positions is going to be important. There’s some behind the scenes hope that Ramsey could be back for the trip to White Hart Lane on March 16th, in the meantime we’ve got to keep everyone else fit and healthy as the season reaches its final stages.

So that’s about that for this morning. There’ll be an Arsecast Extra for you before lunch. Due to time constraints it was actually recorded yesterday, so if you had a question for this week’s episode it’ll have to wait until next Monday (assuming it’s still relevant).

In the meantime, welcome to the new week.