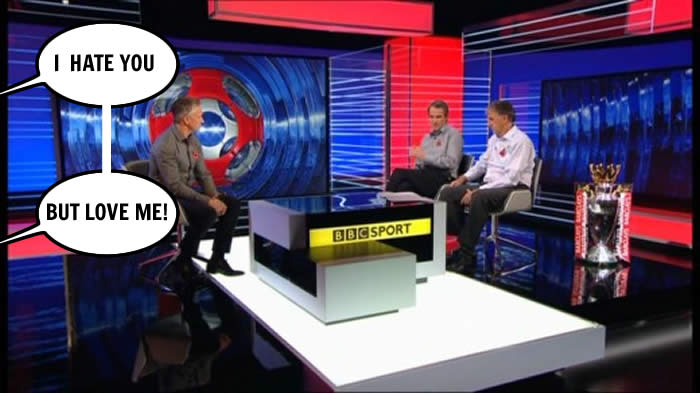 One of the consequences of doing well is lack of drama. Which isn’t to say folks don’t love a bit of it – witness the non-event that is the transfer window to see how nothing much can become an all-encompassing spectacle, not helped by the signing of Spine Krackedstromm, in fairness – but one tidy win later, to keep us top of the table and it does seem a bit like yesterday’s news.

It seems to me there are – and this is a reference to human condition far more than Arsenal fans in general – folk who thrive off confrontation and the need to let other people know they are wrong because they disagree with them. It doesn’t matter how well things are going, there always has to be something to argue about.

It must be incredibly tiring. At the moment it’s a bit like being put up in a 5-star hotel; wined and dined; given use of the extensive spa facilities; rubbed and massaged to the point of bliss; then phoning reception and complaining that the third pillow, which you have just taken down from the spacious built-in wardrobe (which contains the free mini-bar), is slightly lumpy at one end.

We know, because of the nature of people and the game itself, that divisions exist amongst Arsenal fans. If you can’t be categorised by one shitbox acronym, you must the other shitbox acronym. Winning is never quite proof enough of our quality; losing is a sign of the impending apocalypse; reasonable, analytical criticism is taken as blasphemy; words are twisted, and misrepresented, just because people want to fight about something.

As Isaac Asimov once said, “People who think they know everything are a great annoyance to those of us who do.”

The other thing people get worked up about these days is whether or not we get the requisite credit from the media for the season we’re having thus far. I mean, I get it. Everyone likes it when that thing you like gets praised. I remember reading reviews of albums I liked back in the day, taking great exception when the reviewer dared to like it less than I did, but at this point, frankly, who cares? Some people like things less, or not at all, and although I still reserve the right to consider them a monster, they’re probably not.

The last few weeks have seen Manchester City praised to the hilt for being a wonderfully effective attacking team. Which they were until poor little Jose, on his poor little pony, came to town and put a spoke in their wheel. And some people have complained, vociferously, because isn’t it Arsenal that are top of the table and if Man City are so good then how come they’re not ahead of us and praising them is stupid and thick and dense because of that.

The first thing to say is that it is possible to praise another team and still appreciate the merits of another. It’s not a necessity to qualify every positive thing you might say so as not to offend other people. The second thing is that we have been quietly chugging along, the little engine that could-style, winning games by a couple of goals and, let’s be honest, in a far less spectacular way than a team that’s been smashing in 5 or 6 goals a game on a semi-regular basis.

The third, and to my mind, the most crucial, thing is this: who gives a shit? The single most important thing is what the team does, not what the media thinks of what the team does. It shouldn’t be a personal affront if one journalist thinks City are more exciting, or Chelsea have the relentlessness to take them to the title. Much as you might disagree with it, or feel aggrieved about it, aren’t they entitled to hold that opinion?

There was, for some time, outrage every time Match of the Day was on this season because – to a man – none of them thought Arsenal could win the title. I get that. We’ve hardly challenged for 5 or 6 seasons, we’ve been brittle, despite some obvious qualities unconvincing over the course of whole seasons, and although we bought Mesut Ozil and brought in Mathieu Flamini, there was (and still is to a certain extent), a belief that we’d botched our attempts to bring in a top class striker.

So if Shearer or Hansen or Lawrenson or any of them had misgivings about us being able to last the pace, it was hardly at odds with the opinion of many fans who thought similar. If you’d asked me at the start of the season if I thought we could win it, or if I thought we’d be top now, I’d have said no. Obviously, I would want it to happen, but realistically speaking I didn’t think we’d be doing as well as we are.

So it’s not exactly an outrageous thing for people to say at the start of the season. Or a third of the way through it. Or even halfway through it. It’s worth remembering too that opinion is fluid and changes due to circumstances. Taking a fixed position on something, whichever end of the spectrum you’re at, and never budging regardless of what happens, is not healthy for your mind. So Arsenal doing well might make people think we can win the title, or it might not. It’s up to us to convince them, I suppose.

My opinion has changed from the start of the season. I think we can win it. It’ll be tremendously difficult, a massive challenge for this group of players, but based on what we’ve seen from this team this season my opinion is that it’s possible, if not probable. We’re still underdogs (but then I quite like that anyway).

The other thing to bear in mind is that there’s little or no goodwill towards most of these pundits. They’re an ex-Liverpool this, or a former Sp*rs that, so why is their validation so important? Why do people get so hung up on the opinions of people they can’t stand in the first place? Do you really need Robbie Savage or Michael Owen to perform a public about face, apologise for being a cretin and seek forgiveness? You really shouldn’t.

A journalist being critical of something Arsenal, Arsene, or the team do, doesn’t necessarily mean that journalist is anti-Arsenal. I’m sure that’s true in a few cases, those with loyalties to other clubs have been well known to stick the knife in from time to time, but you see, with monotonous regularity, writers with generally balanced and intelligent views being set upon as if they were Ashley Cole doing a poo on the bust of Herbert Chapman simply because they’ve dared to question something we’ve done or how we’ve done it. It’s bizarre.

The basic point is this: Arsenal are enjoying a great season so far. It promises much, there are trophies to fight for, big games to be played, and so far we’ve acqiutted ourselves brilliantly. We’re competing – properly competing at that – we’re defensively mean, offensively keen, and as efficient as we’ve been in what seems like an age.

But if your enjoyment of all of this is predicated on the need for journalists and rent-a-gob pundits to wax lyrical over Arsenal, might I respectfully suggest you’re doing yourself a disservice. If pissing in the wind is your thing, be my guest, but I’m quite content for us to keep chugging along.

What happens on the pitch is far more important than what ends up in print or on the airwaves.

Notes on no scandal