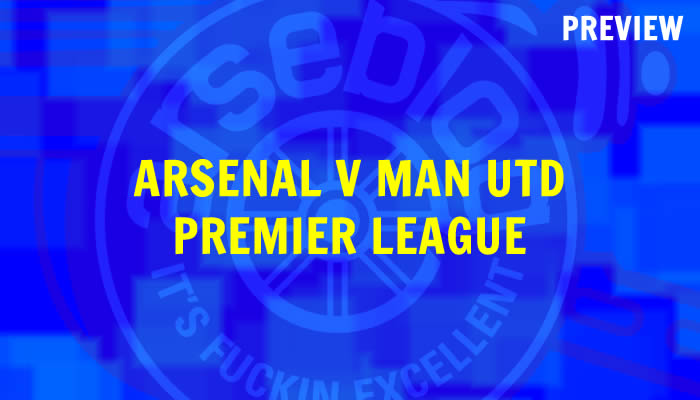 After the Anfield atrocity, a chance to put things right and get back on track tonight – and against a team that are well and truly in the midst of their own struggle.

The word crisis is bandied around far too easily in football these days. For example: Arsenal losing to Liverpool by a large margin is unpleasant, but not a crisis – regardless of what some ‘Chief Sports Writer, Daily Mirror’, who has taken it upon himself to speak on behalf of the ‘majority‘ of Arsenal fans, might have you believe (the arrogance of that is staggering).

The reigning champions, having lost 8 Premier League games already this season, and struggling to cope with the departure of the most successful manager in the history of English football, well … given the nature of that club down the years, it’s much closer to crisis than what we’re experiencing.

You could see by the way Moyes celebrated two goals against Fulham (as if he were Marco Tardelli in the 1982 World Cup final) how he’s feeling the pressure, and the late equaliser won’t have done much for his mood. As I mentioned earlier in the week, it’s always tough to play a wounded animal, but there are two of those on show tonight.

United will be desperate to get three points, sitting 9 points off the Champions League spot which, you have to think, is absolutely vital to their rebuilding plans this summer. Arsenal, meanwhile, must react to the horror show last Saturday and remind everyone that what they’ve done this season hasn’t been some kind of happy accident.

It’s a similar situation to the one we faced when Chelsea came to visit after the 6-3 at the Middle Eastlands. The single most important thing that night was to ensure we didn’t get beaten, and although the poverty stricken horsemen dropped points against West Brom last night, and it does provide us a chance to go top again, I don’t think it’s absolutely vital that we win tonight.

The onus is on us to have a go but what made life easy for Liverpool was the way we pushed forward, leaving big spaces for them to exploit. As bad as United have been this season, they do have players who can hurt us in a similar way, and I suspect we might see a back to basics performance from us tonight. The platform for our season has been the fact we’re so defensively sound. On that we’ve built plenty of wins by a goal or two, and I think that’s the way we’ll go tonight.

That said, it’s important to start on the front foot. We got sucker punched early at Anfield and some of that was down to how badly we started the game. That’s why, for me anyway, Tomas Rosicky has to start tonight, probably in place of Alex Oxlade-Chamberlain. He’s a player who sets the tempo for Arsenal, usually a high one, both with and without the ball.

When we’ve got it we need to use it more quickly, without it we need to put pressure on a United side whose approach seems to be get it wide and cross it. We talked about stopping the supply on Saturday, and failed miserably, and as poor as the defence were it was a collective failure, one that the midfield and those players in wide positions have to take responsibility for.

The only other change I foresee is Kieran Gibbs coming in for Nacho Monreal. The Spaniard has struggled recently and Gibbs should now be more or less free from the injury which has been troubling him. There are those who would advocate the ‘resting’ of Mesut Ozil, but I just don’t see how we can do that. There’s no obvious replacement in terms of quality and it would be something United would relish.

The manager has admitted the player is struggling, but has told him to forget the price tag and the pressure, saying:

He he knows a lot is expected when you are a big transfer like that. There is a big expectation level but he should not worry about that, just play in the team and enjoy it, give his best. That’s the best way to deal with it.

He also went on to say:

He’s not a guy who doesn’t care. His style can sometimes look like that, but he’s really the opposite character. He cares about the game, he wants to do well, he needs more support.

I think that call for support is aimed more at the team than fans who, as far as I can see, have been widely supportive of Ozil and understanding of his current circumstances. Does he need more from his teammates to become effective? Is it coincidence that his ‘slump’, so to speak, more or less coincides with the absence of Aaron Ramsey from the side?

People suggest that we lack the kind of player on whom Ozil thrives, the runs in behind, and so forth, but there’s not much we can do about that, other than charge some of those we do have to help out more. It’s also interesting that the manager has urged him to be a bit more selfish in the final third, saying:

You want the guy who plays behind the striker to score some goals and sometimes he is too obsessed with making the perfect pass when he could take a shot at goal.

His last goal was on December 8th against Everton, tonight would be a very good place for him to start scoring again, and a big performance in a big game could be just the kick-start his season needs.

It’s not all on Ozil though, of course, this is a team that has had to deal with doubters and dissenters all season, and if there are more of those because of what happened last weekend, then tonight is their chance to show them what this Arsenal side is really made of.

This is a massive game, the pressure is huge, and the expectation levels – because of what we’ve done thus far, coupled with what United have failed do – are high. Arsene Wenger said that this period is not one that will define our season, but a positive result tonight would certainly answer some of the questions that have been raised in the last few days.

It’s also worth remembering that the focus tonight shouldn’t be on the most negative outcome, the ‘what if’ disaster that might never happen. It ought to be on a team that has had a very good season up to now and with the support of the crowd, who can make a difference, have a great chance to go back to the top of the Premier League.

As the quisling little boy inside the Dutch Skunk comes to town, alongside the rest of tell-tale Moyes motley crew who have, down the years, caused us plenty of pain, the Guns should be pointed very much outwards.

Remember: if you can’t see tonight’s game we’ll have full live blog coverage of the game for you today. Up to the second live updates on your computer, phone, tablet or just about anything else that has an internet connection. Check back later with a post which has all the details, or bookmark our default live blog page and updates will begin automatically.

It feels like it’s going to be a long day, in the build up to what will, hopefully, be a good night. Until then.