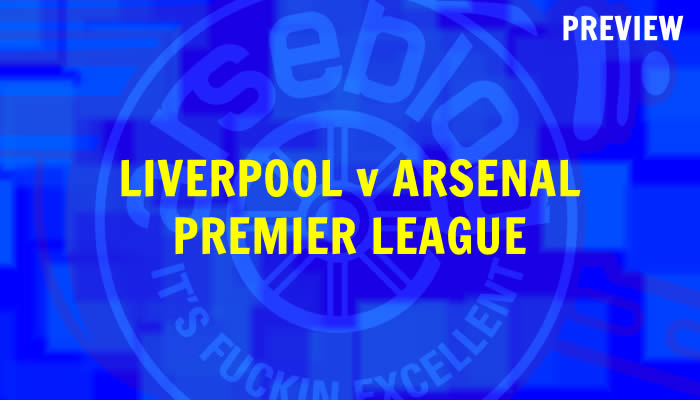 So we’re off to Anfield today for the first game in DEATHRUN1.

Liverpool have been having an excellent season, powered by the goals of Suarez (mostly) and Sturridge, to a lesser extent. Arsene Wenger identified them as the key to winning the game from an Arsenal point of view: keep the ball away from them, and you cancel out what makes their team tick.

We did that at the Emirates earlier in the season – the only team to have stopped them scoring when they’ve started together – and that came from dominating the midfield. That day people were worried that we had no Flamini but a midfield/forward line-up of Arteta, Ramsey, Rosicky, Ozil, Cazorla and Giroud were just too much for the Mugsmashers to handle.

Obviously Ramsey is an absence today, but I don’t think it’d be unrealistic to see the other 5 start and the manager then has to make a decision about who plays on the right hand side. I suspect Lukas Podolski will find himself benched again and I think Alex Oxlade-Chamberlain could keep his place. Whether it’s in that central-position, or on the right, remains to be seen.

Jack Wilshere is in the squad after tweaking his ankle in the FA Cup, and he too could well fill that midfield gap, with Rosicky right. I’d be surprised not to see Kieran Gibbs at left back again. The boss admitted they had some worries about his calf ahead of the Palace game, which is why Monreal continued, but fitness permitting I think the Englishman will come back into the side.

Arsenal will have to be in full one-game-at-a-time mode in these next 11 days, the focus has to be absolute, but Arsene Wenger rightly says:

It is a good moment for us to win a big game because we have a tough predicted month. At the moment we are on a good run and the best way to continue that is to keep the confidence level high and, of course, stay in a strong position in the title race.

A win today would really provide a boost. There are people who remain unconvinced about this team. Not so much that we’re title contenders – because I think only a fool would suggest that a team that’s been top of the table for most of the season isn’t that, at least – but that we’ve got what it takes to go all the way. And that’s understandable. Games like today will go some way to proving that point. It’s a big game, against a big opponent, with plenty of pressure, and how today plays out will inform that thinking.

As good as Liverpool are up front, they do look less than convincing at the back, and given the talent and quality we have you feel this could be the key factor. If we can contain their front two and remain as defensively solid as we have done for most of this season, then you have to think we’ve got what it takes to hurt them. I’m hoping to see good service for Giroud, but Cazorla is playing well, we’ve shown that goals can come from all this team, and I’ve just got a little feeling in my bones about Mesut Ozil today.

We could send something of a message with the right result. Of course you can’t take anything for granted against any team in this league, let alone a traditionally difficult opponent like Liverpool, but I think we’re capable of three points today.

In other news, there were a couple of fantastic interviews in the papers yesterday with two of our first team players. Firstly, in the Guardian Per Mertesacker revealed he was making good progress with his contract talks, but also played up in the influence of Steve Bould. He said:

Steve likes to work with us, especially with the back four. We are grateful for his influence, his tips and his little hints as to what we might do better in any situation We’ve worked just on details and that’s what it’s about, that’s what really pays off now. From the start, he tried to be an influence. He’s a good addition on the coaching staff.

It’s hard not to see the influence of a member of one of Arsenal’s greatest defences on a team that is now miserly and mean, and I have to say I love it. Read the rest of the interview here.

I understand that Arsenal fans want a big name, but I try to stay calm, to take it easy and concentrate on my job, train well, and repay the confidence of the boss. I know I’m not a player on the same level as someone like Suarez – because he’s been amazing this season – but I know I can improve again. That’s why I’m quite confident of my future here. you’ve always got to believe in your quality and remember that people trust you. I feel really good here and I really want to win something with this club.

Both interviews are well worth your time this morning and both players come across as guys with absolutely the right attitude towards their careers at this club. It’s interesting to note that this is a squad of players that – when compared to others in more recent memory – really lacks the divisive characters that have been the subject of such … discussion, shall we say.

Finally, Yaya Sanogo made his comeback from injury yesterday, playing an hour in an U21s game at London Colney.

As always we’ll have full live blog coverage of the game for you. Check back here later for a post with all the details or simply bookmark our default live blog page. Updates begin automatically, starting with team news around an hour before kick off.

Also, if you fancy a bet, Paddy Power have a new account exclusive for today. Arseblog fans can avail of an ENHANCED price of 11/2 on Arsenal to beat Liverpool in Saturday’s early premiership clash.  New Accounts Only! Sign up through the link below now – http://pdy.pr/xarseblogx

Right, that’s that. Time to take the dog for a walk, eat a slice of last night’s pizza for breakfast, then the football.

Come on you yellows, let’s smash some mugs!