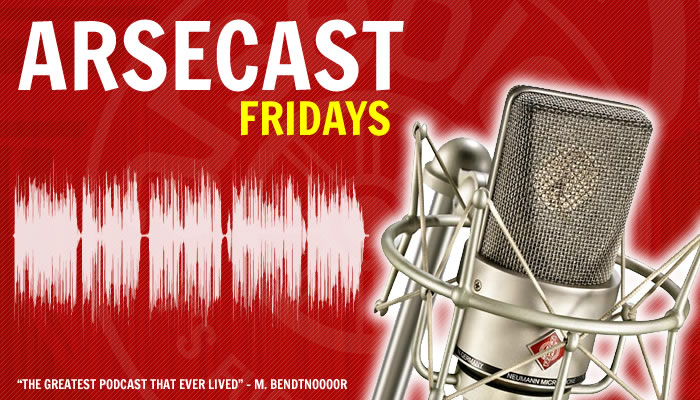 Morning all. It can’t be just for me that the weeks are flying by ridiculously fast, can it? How the hell is it Friday already?

We don’t play until Sunday when we’ve got the chance for some FA Cup redemption against the ‘smashers, and already there’s talk of rotation in terms of the team. It’s a tricky one in some respects. The last two games would suggest that some changes need to be made. You can’t on one hand bemoan the performance of a particular player, and then gripe if the manager thinks about changing him.

I thought the team selection for United was probably the best XI we could have started with, based on everything we’ve seen this season so far. That the manager was so cautious about making changes as the game wore on is another thing entirely.

For Sunday, there’s talk of Fabianski and Jenkinson and Bendtner and Podolski and Gnabry and I understand the need to try something that might spark a bit of life back into the team. But that must be weighed up with our need to play our very best team possible. If Jenkinson is playing because Sagna is carrying a bit of a knock and we want to ensure he doesn’t break down, fine. But if Sagna is fully fit, I think he should play because he’s better.

The complaints about Giroud are all well and good – and the bloke looks knackered – but do you play Podolski, unconvincing as a centre-forward every single time he’s played there? Or Bendtner, this season’s Eboue-style clownish, guilt-powered cult hero (and I say this as somebody who thinks he’s a decent player really)? Or Yaya Sanogo, fresh from Ligue 2 and a 5 month injury?

If those options don’t give you pause for thought, whichever one you choose, then you’re a better man than I am (or woman, equal opportunity blogging and all that. I’m not a good woman at all. Legs are way too hairy and I just can’t do heels).

On today’s Arsecast we discuss the need to inject something new into the team and the name of Serge Gnabry is one that cropped up. The young German is inexperienced but highly talented. He’s a round peg for the round hole, and without Walcott all our other pegs are a bit square.

But then you wonder is trying to fillet the team after a bad week an overreaction when they’ve done well consistently this season? We have got good results most weeks. This week feels particularly flat because of what happened at Anfield twinned with the fact we couldn’t beat a United side that are, essentially, like the school bully who is now confined to a wheelchair yet still able to fend you off with his walking stick.

Wojciech Szczesny has been trying to add some measure to the last few days, aware of the frustration felt by fans after two results which have left the team open to questioning. He says:

We are in a good position in the league, and we are still in the FA Cup and the Champions League, so I don’t know what kind of frustration we should have. The frustration should have been a year or two ago when we were struggling. We’re still there at the top of the table. We are going to push for the title. We are still confident.

It’s good to hear and it’s hard not to see his point. 12 months ago things felt a lot, lot worse. Mostly because they were. We’d gone out of the Capital One Cup to Bradford (no thanks to Gervinho, this season’s ‘perhaps we shouldn’t have sold him’ ex-girlfriend that’s looking good going out with another guy but still has all the annoying tics you’ve allowed yourself to forget); an FA Cup exit to Blackburn was just about to happen followed by a painful Bayern rogering at home; and in the Premier League Sp*rs were motoring towards a top four spot at our expense.

Arsenal’s reaction since then has been to win 25 league games, draw 7 and lose just 5. So we can’t ignore there’s been a response and a consistency to the way we’ve played and performed. Yet it’s hard to shake the ‘Once bitten’ feeling, and given the schedule, we could be sitting here next week out of the FA Cup and facing a trip to Munich which is nigh on pointless.

Of course that’s the absolute worst case scenario, but when you’re lying in the dark and you hear a noise you don’t think ‘Oh, that must be a cute puppy trying to inveigle it’s way into my life for super-awesome cuddles and slurps’. It’s a monster who drools acid saliva, has fearsome talons and a blood curdling screech which sounds like Sussudio which he lets rip to ensure you know that he wants to eat your heart. Slowly.

The good thing is that the way we look our situation, and the way the players do, is very different. We might worry and stress and over-analyse a scrappy 1-0 over relegation fodder; they think ‘Clean sheet, win, next game.’

After the draw in midweek they’ll feel like they’ll have put the Anfield Atrocity behind them and, I’m sure, will be out for some measure of revenge because it is embarrassing to get turned over like that by a team you’d previous beaten quite comfortably this season. Let’s hope so. Anyway, there’s plenty more to say about this game, and how we might approach it over the next couple of days.

Now though, time for this week’s Arsecast and I’m joined by Goonerholic and the Man from East Lower to discuss Liverpool, Man Utd, the fear of collapse, Lukas Podolski, Olivier Giroud and if there’s room for Serge Gnabry. Andrei Arshavin reads some mean Tweets and there’s the usual waffle.

You can subscribe to the Arsecast on iTunes by clicking here. Or if you want to subscribe directly to the feed URL you can do so too (this is a much better way to do it as you don’t experience the delays from iTunes). To download this week’s Arsecast directly – click here 29mb MP3).

And that, my friends, is about that for this morning. Have yourselves a splendid Friday, more here from me tomorrow.