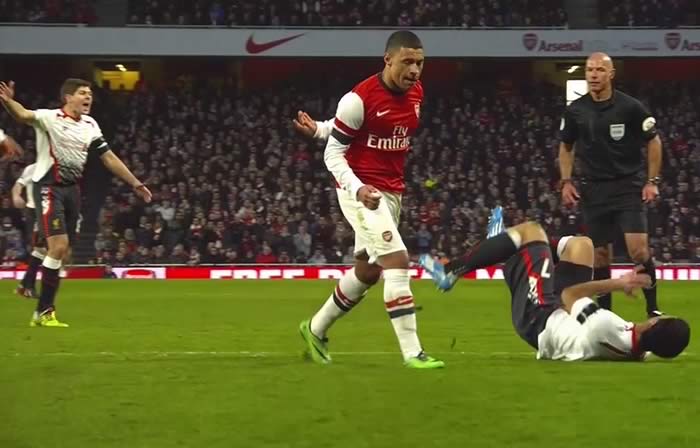 I suspect, this morning, that Liverpool fans will feel somewhat aggrieved at their FA Cup exit, pointing the finger of blame squarely at Howard “The Duck” Webb, who failed to give them one of the most obvious penalties you will ever see.

In the 65th minute, when a free kick rebounded to him in the box, Luis Suarez was, unquestionably, booted out of it by Alex Oxlade-Chamberlain. Like the first penalty he won, he made sure the referee knew there was contact, writhing around like vampire that had been weed on at daybreak by a priest with garlic piss, and I have to admit I held my breath, fearing the worst.

Oxlade-Chamberlain closed his eyes, waiting for the inevitable, but instead of pointing to the spot, Webb gave a goal kick instead. Outrageous, if you’re a Liverpool fan. From an Arsenal point of view it was, at first, a moment of great relief, then one of intense hilarity. We got away with that, but then I think we might have been due a little slice of luck after the week we’ve had.

And without wishing to take anything away from the righteousness of Liverpool’s post-game complaining about that decision, to say their failure to progress in the cup was simply down to that rather clouds the fact they had plenty of decent chances to score and fluffed them all.

In the opening 4 minutes Daniel Sturridge’s movement provided him with two fantastic opportunities. The first saw Lukasz Fabianski begin a series of fantastic saves; the second, well, having rounded the keeper he should have hit the target and opened the scoring which would have been a huge goal. Not only would it have put them ahead, but coming so soon in the game, just like at Anfield, it would surely have been a massive blow to the Arsenal psyche, which still appears to be a bit delicate.

It’s fair to say we rode our luck a bit at times. In the second half, Sturridge had another brilliant opportunity to score, and once more failed to do so. Trying to round Fabianski from close range seemed an odd choice, the keeper made it a poor one with a beautifully timed save. And all this happened in-between Suarez finding space to hammer shots at goal on a fairly regular basis, each time Fabianski was equal to the threat when he hit the target.

So, when Liverpool look back on this game, Webb’s admittedly terrible decision gives them a handy out on a day when their finishing was second-rate, especially when you consider how ruthless and efficient both Suarez and Sturridge have been in recent times. Sturridge’s post-game sit down, as disconsolate as if he’d lost a final, spoke volumes.

Arsenal had fewer chances, but made the most of them. When Yaya Sanogo’s impressive 16th minute chest down and shot was blocked by Gerrard, it rebounded to Oxlade-Chamberlain who side-footed us into the lead. In the second half, the Ox made a run down the outside right channel, Ozil slipped him in behind with perfect pass and his pull back found Podolski making a Ljungberg-esque run into the box to make it 2-0.

After that Liverpool responded well, I thought, but we looked relatively comfortable until their penalty. I’m very much of the opinion that a kick like that doesn’t equal the response we saw from Suarez. It’s one of those classic ‘There’s contact, I’m going down’ penalties, but anywhere else on the pitch and you’d accept that was a free kick without question. Podolski was rash, there was no need for it, and I wonder if his unhappiness when he was substituted was because he knew himself what a poor decision that was.

It meant the final half an hour was more nervy that it might have been and as I mentioned they did have their chances. The best of which fell to Agger when Fabianski made his only mistake of the game, but with the goal gaping the header flew just past the top corner (no doubt that miss is somehow Howard Webb’s fault for not giving a penalty).

We did have a chance or two ourselves, Santi Cazorla might have had a little more compsure when the ball fell to him in a great position, and you could easily argue that Steven Gerrard should have seen red for a second bookable offence when he scythed down a flying Oxlade-Chamberlain, but in the end they couldn’t find a way through and we now face Everton, at home, in the next round.

It was vital for us to respond to the disappointing performance we had against Liverpool last week. It was vital as well because we had an opportunity to go to the quarter-final of the FA Cup. I am very pleased with the intensity of our commitment and our response, our determination. Overall it was a fantastic FA Cup tie. Many people questioned the FA Cup but like today it delivers a great football performance.

It put some nice gloss on a week which has been difficult, to say the least. Taking a 5-1 thrashing and not being in the right place to properly take advantage of the worst United side in years hasn’t been much fun, but this is a results business and yesterday will brighten things up considerably.

When you consider that the game was won without Szczesny, Sagna, Gibbs, Rosicky, Wilshere, Ramsey, Cazorla, Walcott or Giroud in the starting line-up, it speaks to a squad that has a little more depth than people give it credit for. Fabianski had a splendid game for a guy who hasn’t played much at all, and the challenge for the manager this summer will be to find back-up of that quality when he leaves.

It was a starting XI that would have been easy for some people to rip apart had we not got the right result. Monreal and Jenkinson slotted in well at full back, the latter in particular burying some of the ghosts of his last performance with an excellent game. Podolski got a big goal in a big game, while the full debut for Yaya Sanogo was undoubtedly a massive gamble for Wenger. He’s been ridiculed since his arrival because of injury and because he was the only striker Arsenal brought in during a summer when they went after the likes of Higuain and Suarez and failed to close the deals.

It was good to see yesterday that we obviously brought him in for good reason. One game is not sufficient to make any real judgement on him, but the way he coped with the pressure, the way he put himself about against Agger (who struggled at times) and Skertl, his contribution to the goal and his physical presence was all very promising. The raw materials are there (raw being the very operative word), and it’ll take him time to develop, but hopefully he’ll be given the time and the leeway to do that.

I lost count of the ‘Sanogo starting? We’re throwing the game, he’s crap’ comments beforehand yesterday. It’s not untypical Internet reaction, but he repaid the manager’s faith in him with a very good full debut and let’s hope it’s the start of something good.

The win also provides a timely boost ahead of this week’s Champions League action against some lowly German side, but we can touch more on that over the next couple of days. For now we can just enjoy the warming glow of what was a fantastic, old school cup tie from which we emerged the victors.

Unlucky Mugsmasher, but you got well fed last weekend!

ps – Don’t forget we’ll have an Arsecast Extra for you later today. Questions, if you have them, directed to @gunnerblog and @arseblog on Twitter with the hashtag #arsecastextra