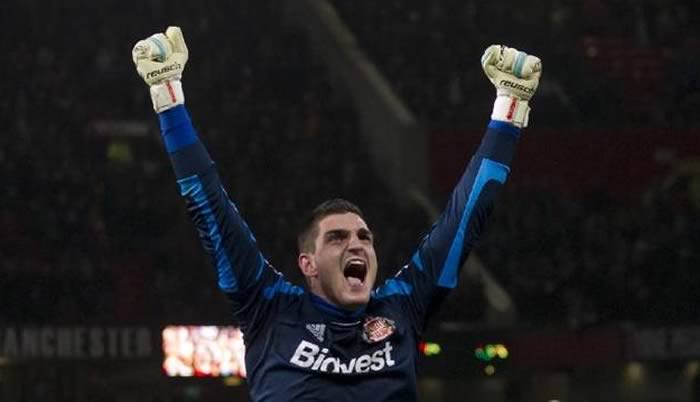 Well, we can’t start the morning without mentioning a former Gunner and his part in the most hilariously awful penalty shoot-out I think I’ve ever seen.

Manchester United were at home against Sunderland in the Capital One Cup, and from their five penalties, they only score one (and even that just crept inside the post). In nets for the visitors, one Vito Mannone: a man whose nose is so Roman his nostrils are named Romulus and Remus.

Phil Jones and Danny Welbeck blasted their penalties into orbit, but Sunderland responded in kind with spot-kicks worse than Terence Trent D’Arby’s second album as both teams tried to out-shit themselves. When Vito saved from Junuzaj, Adam Johnson had the chance to send Sunderland to Wembley. However, his penalty was rubbish and Rafael had a go to try and keep United in the tie.

But it was not to be as Mannone made the save and lapped up the praise and adulation from the away fans at Old Trafford. And how can you not be pleased for him? He might not have ever been the answer to our goalkeeping question but he was an honest, decent guy who did his best – and at times his best was pretty good.

There was that game against Fulham a good few years back, but at the beginning of the 2012/13 season when Fabianski and Szczesny were both out, he made 13 appearances and acquitted himself fairly well, all things considered. Hopefully he gets to enjoy the day at Wembley, even if Man City are clear favourites. It is, however, cup football and we all know anything can happen.

You might also remember that City know very well that anything can happen, the memory of bottling the FA Cup final against Wigan must be fairly fresh in their minds. Vito the hero once more? I don’t think I’d put a lot of money on it, but you never know.

Elsewhere, reports place Arsene Wenger in Valencia last night, watching Levante v Barcelona in the Copa del Rey. Suggestions are he was looking at Sergi Roberto, a central midfielder, as well as Cristian Tello and Pedro, but who knows? I’ve had a look at the Levante squad to see if there’s a young gem in there he might have his eye on but beyond young left winger Rubén García there doesn’t seem to be anything that really fits the profile of what we might be looking for. And even that one guy is something of a stretch.

If it was Tello, he’ll have been impressed by a hat-trick from the young forward, but is that the kind of performance that convinces a visiting manager to try do a deal, or one that makes his current club think ‘Er, hang on a minute, why would we let that player go?’

Maybe he was just bringing back Cesc the last of his stuff. Or he wanted to get a kebab from that place just across the road from the train station in Valencia which is the best kebab I think I’ve ever had and said ‘Maybe I’ll take in a game while I’m here om nom nom.’ Time will tell, I guess.

Speaking of January transfers, something I wrote for ESPN. A bit of a flashback to this time in 2004, and how an unlikely transfer window move had a positive impact on the season.

Meanwhile, Nicklas Bendtner’s agent says he’s not aware of any interest in TGSTEL and says the player’s focus is on staying fit and staying with Arsenal. If he is full recovered from his ankle knack, I’d expect him to start up front tomorrow night in the FA Cup, Podolski outside him providing the service for a succession of bullet headers.

Indeed, if we do bring in the big player everyone wants to see this January, it’s still likely that we’d need Bendtner as back-up for Giroud. He would remain the most like for like replacement, and could have an impact in the second half of the season. I would very much enjoy seeing his Instagram and the size of the celebratory cigar if we were to win something.

And as we’re on the subject and we prepare for our game against Coventry tomorrow night, it says something that the 5000+ away fans they’ll bring to the Emirates is over twice as many as attend their home games now. While it’s not really an issue for us specifically, this makes for stark reading and shows the danger of football clubs being acquired as things or assets.

On paper they may well be, and we can’t get away from the fact that they are businesses first and foremost these days, but they exist not just to make money, or win trophies. Most clubs win nothing at all, but fans still pay their money and go and support their team. When you look at what’s happened to Coventry, playing in a town 35 miles away, with sub-2000 attendances, in a stadium that’s not theirs, it’s an unpleasant reminder of how the focus on money has damaged the game.

Small tangent: Arsenal are down to 8th in the annual Deloitte Football Rich List.

That’s just about that. We’ll have the latest team news from the manager’s press conference this morning over on Arseblog News (suggests his visit to Spain was, indeed, ‘flying’).

Back tomorrow with an Arsecast and all the usual guff. Until then.