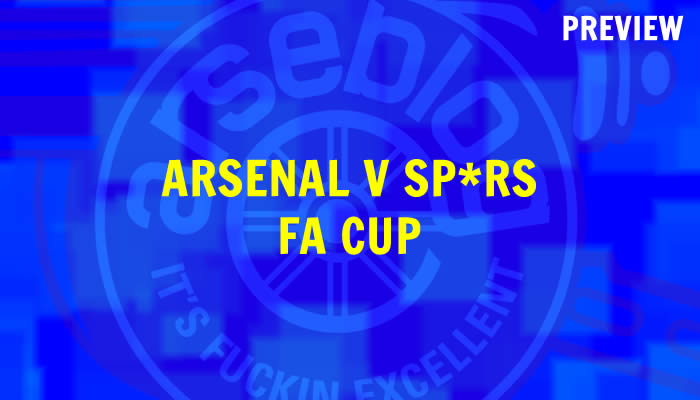 FA Cup third round today and the small matter of a North London derby to entertain us.

The last time the two sides met in the cup was in the 2000-1 season when we played them in the semi-final at Old Trafford. Goals from Pires and Vieira saw us through that day. Today, the manager has something of a balancing act on his hands in terms of his squad.

The team news is that Ramsey and Gibbs remain out, Bendtner is missing after having his ankle knackered against Cardiff while Olivier Giroud’s ankle is better but due to illness he’s 90% to miss the game. The good news is that Mesut Ozil featured in the training pictures yesterday which would lead me to believe he’s available to play.

Arsene spoke yesterday about one or two players being ‘at the limit’, in danger of injury if they play, and that may colour his team selection. Who those players are, I don’t know, but you’d have to think it’s the likes of Per Mertesacker, Bacary Sagna and maybe Mikel Arteta, who have been involved most of the season.

Guys like Monreal, Cazorla, Walcott, Podolski and even Wilshere have spent time on the sidelines so should be fresh, but that’s making the assumption this is a fatigue issue alone. Players carry little aches and strains into every game. A kick here, a small strain there, and you can head towards that fabled ‘red zone’.

That said, given the opposition and the extra importance that brings to proceedings, I can’t imagine him taking any unnecessary risks with his team selection. He knows well how much this game means, and referenced last season’s disappointment against Blackburn, saying:

Honestly I still have in my mind the fact that we went out last year at home against Blackburn, that was not good enough for us and we have to make sure we absolutely put the effort in to have the chance to go through. It’s an opportunity that we want to take. On top of that, afterwards we have nine days until the next Premier League game so we can give absolutely everything in this game.

You have to think it’ll be Podolski up front again and maybe, despite my thought that he’s not entirely suited to the role, we might be a little premature. While I still think he works better buzzing off a main forward, it can take time to get used to the role and just 65 minutes, after 4 months out, isn’t really enough time to make a definitive judgement. Perhaps with Ozil in the side better movement and more creativity could help him out up there.

Midfield will be interesting, you have to think this is the perfect game for the Arteta – Flamini combo. Arteta to keep the ball moving, Flamini to kick the ever loving shite out of them. But, as above, much will depend on fitness. At the back we could see Vermaelen and Jenkinson, which would be something of a risk, simply because of how many changes that brings to the unit back there. I wonder if the manager might err on the side of caution there.

While he is obviously more informed than any of us regarding the fitness of the players, I think we’ve got to play the strongest team possible and look to use the break afterwards to recover.

They, of course, come into this game full of confidence after beating Man United in their previous game, but then that only makes them as good as the likes of West Brom or Newcastle. The return of Adebayor to their side in the build up to this game seems portentous, and you can be quite sure that he’ll have one of those games where he actually tries and is interested, simply because it’s in his nature to do that before reverting to type.

It’s down to us to keep him, and the rest of them quiet, with our football. We’ve got a good record against them that we have to keep going today. A replay is most certainly something we’d like to avoid, and given that we have a 9 day break after this one, we have no excuse not to go for it today.

We had something of a sluggish start against Cardiff but this is going to be 100mph from the very first kick, I think. We can’t be caught napping. It’s a game that has the ability to deal something of a psychological blow to them also. Many teams get a bump when a new manager takes over but we’ve got the chance to put them back in their place a bit, and show that despite the fact they’re now managed by that bloke who used to play for Blackburn, they remain the same.

It’s going to be a long day waiting for kick off and despite the sad diminishing of this tournament in recent seasons the FA Cup is still a bit special to me.

In other news this morning, the boss says his January transfer plans depend on how serious the injury to Nicklas Bendtner is. He says:

And if that means bringing somebody in:

We would have to. You want to keep your chances for the season at the best possible level.

The issue, of course, is availability in January. I’m baffled by people going on and on about Diego Costa, giving no thought to the fact that Atletico Madrid are well and truly involved in the title fight in Spain and simply wouldn’t sell. Or to the fact that the player himself might not want to move mid-season.

It’s not impossible to find that longer solution, but if you find the right short-term one, then you can hold fire until your real target is more likely to be available. A tricky one, for sure. And dependent on circumstance: results of Bendtner’s scan should be available today and we’ll know more then.

Meanwhile, two youngsters have extended their loan periods. Right back Hector Bellerin will stay with Watford until the end of the season, while keeper Damian Martinez will do likewise at Sheffield Wednesday. Interestingly, both players will look to make an impact in positions where their may well be space for a first team addition/promotion next season. A chance to impress.

Finally, if you fancy winning a pair of signed Santi Cazorla boots, check out the competition here.

As always, we’ll have full live blog coverage of the game later. Check back for a post with all the details, or simply bookmark our default live blog page. Updates begin automatically.