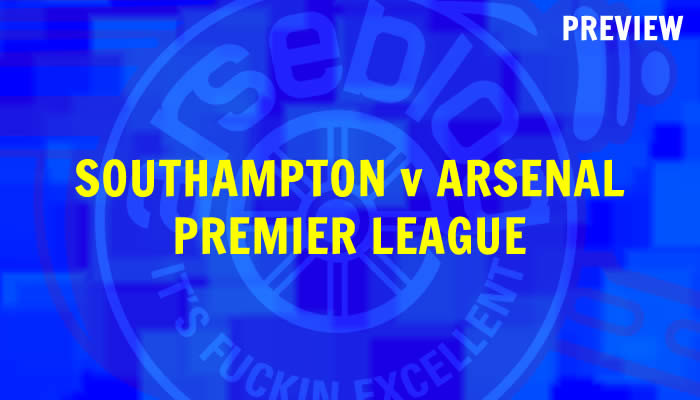 It’s a busy one so we’ll start with a look ahead to tonight’s trip to Southampton.

Team news is that Jack Wilshere is a doubt, probably after he tweaked his ankle against Coventry on Friday night, but Mikel Arteta, Aaron Ramsey and Thomas Vermaelen are back. The return of the two midfielders is particularly timely, and it wouldn’t be a huge surprise to see both of them start later on.

Arteta has been gone for over three weeks with his calf problem, while Ramsey hasn’t played since Dec 26th when we beat West Ham 3-1. In their absence Wilshere has played quite well but the goal threat offered by this resurgent Ramsey and Arteta’s metronomic midfield passing are nice things to have back in the squad.

Up front it’ll be interesting to see if Lukas Podolski keeps his place after two goals in the FA Cup. If he does it would be on the left hand side meaning Santi Cazorla could push over to the right. However, the Spaniard’s recent goal burst has come when deployed on the left and the manager could be reluctant to change that. I have a feeling that’s what he’ll do though.

Serge Gnabry has played well and been trusted against this kind of opposition, but I just wonder if Arsene might plump for a bit more experience out there tonight. Either way, it’s good to have these kind of options, not forgetting that Alex Oxlade-Chamberlain is there too, and although there’s been no specific mention of Tomas Rosicky he made the bench against Fulham with his broken nose, so his availability would give the manager something to think about too.

After a bright start to the season things have gone a little wrong for Southampton in recent weeks but we should be under no illusions this is going to be a tough game. They were very difficult last season when only a somewhat flukey own goal got us a point, but that came at a time in our campaign when we were really struggling. That’s not the case this time around.

They’ve shown this season that with a win over Liverpool and a draw with Man City that they’re not to be taken lightly. However, given the way we’ve been playing and winning without having to get much above second gear at times, you feel like there’s more to come from us, and should we find ourselves tested later on we’re more than capable of responding.

With a schedule that’s only going to get tougher from after this weekend, these are the games we have to file away as routine and ensure we take maximum points from.

In other news, the club officially announced the PUMA deal yesterday, and they’ll take over the manufacturing of our kit from July 1 of this year. It puts to an end a long, and you would have to say, fruitful association with Nike. The deal we did with them certainly left us short in the long-term but so pressing were our immediate needs that it had to be done.

The new deal with PUMA brings in around £150m + bonuses over a 5 year period which is a substantial increase on what we were earning. There was the usual guff from Ivan and the head of PUMA who spoke of ‘key strategic targets’ and ‘football heritage’ and all that. The bottom line is Arsenal have done a very good deal, our commercial income takes another step forward and that provides the manager with more spending power.

I don’t know if it was deliberately pointed or not, but Ivan mentioned the money being available to the manager ‘from this summer’. Of course if you know money is coming in, you can sort things out if you have a desire to spend before that, but we’ll just have to wait and see what the rest of the week brings.

Disappointingly, this was an announcement and only an announcement. There was no show and tell, no unveiling of a new shirt which will, undoubtedly, be teased out over the coming months, but people find stuff on the Internet all the time and it’s been confirmed to us that this is the home kit we’ll be wearing next season.

Looks pretty smart to me, especially the socks, and it seems as if PUMA have done their research. The away kit will be traditional yellow and blue while the third kit, used for cups apparently, will be blue with lime green trim/piping. But for their first year they’ve stayed true to the essence of Arsenal’s home and away kits, and there’s no sign (yet) of anything like the horrendous Wycombe jockey’s outfit from a couple of seasons back.

Meanwhile, at the event itself, Ivan confirmed that Arsene Wenger would be signing a new deal with the club. I wouldn’t say he’s let the cat out of the bag or anything. The cat was already halfway there and we had a slight grip on his tail, but it should really be no surprise. It’s all down to the announcement now, and whether that’s made at the same time as players like Mertesacker, Rosicky and Sagna.

In terms of the latter it seems more doubtful with the manager, for the first time, acknowledging that he’d have to consider his options should he decide to go elsewhere when his contract runs out. Unlike others in that position in times past, Wenger seems utterly convinced by Sagna’s on-field commitment, and why wouldn’t he? He’s discarded other players in similar situations down the years, freezing them out of the squad, but anyone who sees Sagna play will know that he’s a 100%, 100% of the time player.

He’s still our best right back and his experience will have a key part to play in the rest of this season. It also seems like he’s determined to go out on the right note, suggesting the team have let the manager down in the past and that they want to make up for that. I think that works both ways, to be honest, so let’s hope everyone makes everyone feel good come May.

Finally for today, yesterday saw the launch of the first Arsecast Extra – a new weekly podcast myself and James from Gunnerblog will be producing every Monday. On this week’s show a look back at the weekend, at Lukas Podolski’s performance and place in the team, and we take some of your questions sent to us via Twitter. Listen here.

Remember, if you can’t see the game later or time zones mean you’re stuck in work, we’ll have full live blog coverage for you. Check back later for a post with all details or bookmark our default live blog page, updates will begin automatically.