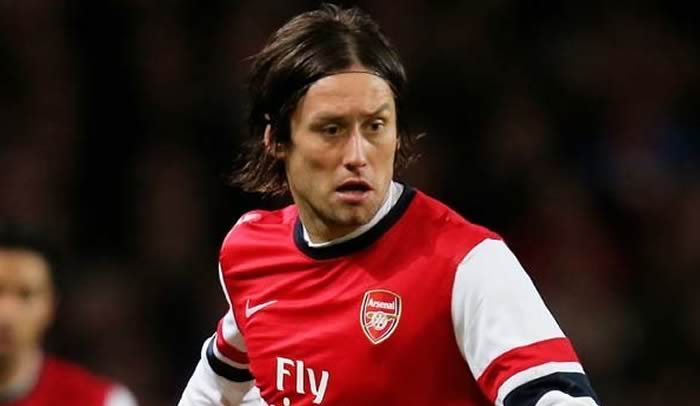 Midweek morning greetings. I dreamed that Arsene Wenger was fired by Ivan Gazidis for stealing stationary and he was replaced by Jon Ronson who did his first press conference wearing Frank Sidebottom’s head. I need to stay away from Twitter for a bit, I think.

Let’s start with Tomas Rosicky and while a new contract looks likely, it’s been revealed that the Czech national team manager, Pavel Vrba, was in town last week and had a meeting with the player about his international future, and also spoke to Arsene Wenger about it.

Wenger said that Tomas has one of the best guys he’s worked with during his time at Arsenal. We talked about the future and how we see it going. Tomas has a huge interest in further representing his country. I sensed that the national team means a lot which comes as a great encouragement for us. It’s exactly what I wanted to hear when I travelled to London.

So, it means that Rosicky will probably be involved in the Czech’s Euro 2016 campaign to some degree and while part me thinks that at 33 he might want to focus on club football, having missed so much of his career he just wants to play as much as possible. And it’s that attitude which sees him perform the way he does despite his age.

As for the links to Bayern Munich. It’s as specious as it gets. It seems that a Czech newspaper picked up on a story first posted by Sports Direct News – the website of a shop which sells trainers – and having been spotted there was regurgitated back into English. There is, as you would expect, nothing going on with Rosicky and Bayern.

Nor is there anything going on with Thomas Vermaelen and West Ham or Thomas Vermaelen and Napoli. As frustrated as the Belgian must be – to the point where I think unless something changes radically a summer move is inevitable – the idea that we might sell or loan our only back-up centre-half is nonsense. To my mind we need one more, we certainly can’t afford to go through the rest of this season with just two recognised centre-halves.

That’s not to say I would have a problem if those two centre-halves played all the games, but it’s just mad to think people would even bother trying to take him. He could well have a big role to play if anything happens to either of the other two.

Speaking of which, Laurent Koscielny has hailed the team’s mental strength saying they’re winning games that in previous seasons they would have let slip. He says:

Mentally we are stronger than ever. We have won some games this season that we would never have won last season. We can feel this season there is something special in the squad. We have all understood that we can achieve something together.

Tied in with Jack Wilshere’s call for the squad to ‘believe’ the other day, you wonder now if the squad themselves have overcome a kind of mental hurdle. Let’s face it, they’re as aware as anyone of the shortcomings, having played in the games when things went wrong, and it is something that lurks not far below the surface.

But now there’s genuine confidence that they can achieve something this season, and that’s a step-forward. I know I’ve mentioned it before but we have a squad that is short on medals, for the most part. There are a few who have won things elsewhere, but not too many, and I wonder if that’s a real driving force for the players we have. A desire to put that right. Some in the early stages of their career, some at the other end, and it’s a good mix.

Finally, some interesting stuff on the manager regarding Wojciech Szczesny. He says:

Certainly a part of his improvement is mental because he’s more mature. His decision-making is cleaner, sharper, quicker. He was always a very talented boy but because he’s intelligent he learns quickly from experience.

When you remember he’s just 23 and has already made 100 Premier League appearances for the club, it augurs well for the future. He’s kicked on a big way since having that little scare last season, dropped for Fabianski. It was his good fortune that his compatriot picked up an injury a few games later, it was ours too because since then he hasn’t looked back.

His stats are fantastic, 10 clean sheets, his distribution has come on leaps and bounds, and although there are still a few raw edges, that’s part and parcel of being 23. At that age, David Seaman had just signed for QPR (where he’d make 150+ appearances before joining Arsenal), and Peter Schmeichel was playing for Danish side Hvidovre.

So while football has changed and players get blooded earlier and earlier, we have to remember he’s still extremely young for a player in a position where many say you don’t mature properly until you’re closer to 30. It has just been half a season, and he’s still got plenty to prove, but in the context of his age, and in comparison to the other keepers in this league, I wouldn’t swap him for anyone else.

Bonus: Here’s a nice video to start your morning showing Szczesny’s performance this season so far.

That’s your lot, have a good Wednesday, back tomorrow.