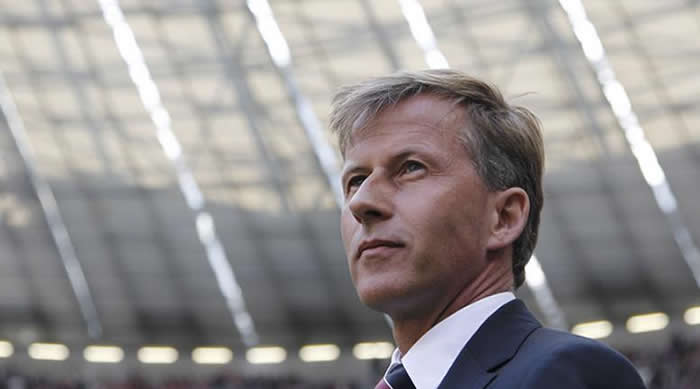 The most obvious story to kick off with is the confirmation that we’ve appointed Andries Jonker as the new head of the club’s academy. He’s currently the assistant manager of Wolfsburg, will begin his new job in July and will work alongside Liam Brady for a while to get into the swing of things.

I am very pleased that Andries is joining us. He has a big reputation in the game and was a key part of the team which developed the structures which are now producing such strong young players in Holland. I look forward to working with him. I would also like to thank Liam for his work which has been outstanding over many years.

I don’t know a great deal about him or exactly what he’s been tasked with. There’s a feeling that things could certainly be running better at the underage levels, and maybe a new face will help implement some new ideas. He’s very much a disciple of Louis van Gaal and if you take a look at this report from earlier in the week, there are a couple of snippets from the fantastic Dennis Bergkamp book ‘Stillness and speed’ [get it on Amazon here] which give you some insight into his thoughts on his fellow countryman.

It is increasingly difficult for young players to make the step up but the likes of Gnabry and Zelalem provide some hope for the future, while you could point to Wojciech Szczesny, Jack Wilshere and Kieran Gibbs as fully home grown, having been with the club from a very early age. Yes, Szczesny obviously came from abroad, while Gibbs arrived from Wimbledon’s academy aged 13, but their education has been primarily at Arsenal.

So there have been successes over the last few years, but clearly they want to take things in a slightly different direction. It seems that Ivan Gazidis has been the man who engaged most in this recruitment process, but as I mentioned the other day, it’s unthinkable that Arsene Wenger hasn’t had a measure of input and/or veto to any new appointment.

As a somewhat interesting aside, I read a piece in the Times last week which took a look at our U13s being coached, and the man running the drills was Ryan Garry. For those of you who don’t remember him, he was a very highly thought of young full back whose career was pretty much ruined by injury.

I think he only made one start, in that 6-1 win over Southampton at the tail end of the 2002-3 season, just after the league had gone kaput – Pires and Pennant scored hat-tricks that night. It’s nice to see him involved again, and who knows, in a couple of years he might move up the coaching ladder a bit.

Elsewhere there’s the kind of stuff on the official site that pops up after we win a lot of games. The ‘X: ‘Y’ is ‘Z’ stuff where X is a player, Y is another player and Z is something great. Like ‘Gnabry: Playing with Santi is so easy‘.

Which it probably is, because he’s a wonderful footballer and for somebody like Gnabry coming into the team to have those kind of players around must be fantastic. A real education from proper footballers. It’s stuff that will stand him in good stead and certainly speed up his development, which can only be a good thing for us.

Anyway, I’m quite happy to keep winning and to see those kind of headlines for the rest of the season until the guys run out of nice things to say and have to stretch it a bit:

Koscielny: Mertesacker’s hair has that every day bounce I adore

Sagna: Szczesny could play the Albert Hall if his piano playing continues to improve

Oxlade-Chamberlain: I am a fan of Wilshere’s feet

Giroud: Arteta’s car is very roomy and has a much larger boot than you would think which allows you to fit more in it than a normal car and thus when he’s going on weekends away with his family he can bring plenty of things to keep the kids entertained when they eventually get to their destination.

Meanwhile, Santi Cazorla has had to apologise after being photographed holding up a sign, alongside Robert Pires, which likened Sp*rs to shit. Frankly, I think all our players should apologise for every occasion they’re pictured not holding up such a sign. Storm in a teacup stuff though.

Finally, here’s this week’s Tatics Column from @ArsenalColumn which looks at the growing impact of Jack Wilshere and what Mesut Ozil brings to the team even if he’s not playing quite as well as he can. Check it out.

Right, that’s that. Must continue work on top secret, soon to be announced project. More here tomorrow. Until then.

Jonker and Ljungberg depart as air of uncertainty around Arsenal grows