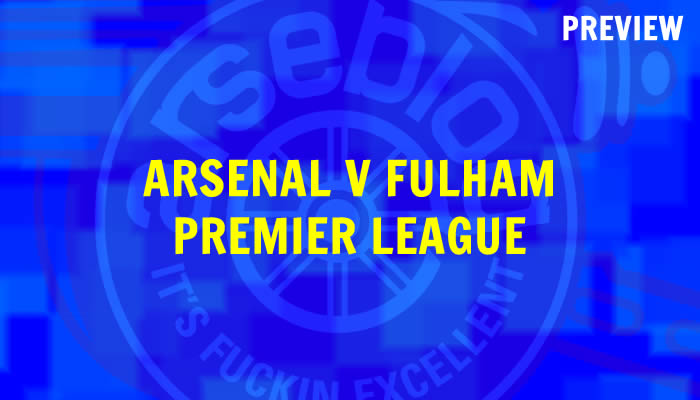 It’s Fulham today and a good chance to take another three points against a team that have been struggling this season, it’s fair to say.

They’ve won just 4 of their last 14 Premier League games, losing the rest, and given our form and confidence, you have to think this is as close to a home banker as you can get. However, as Aston Villa, another team in the doldrums showed us on Monday night, a lack of ruthlessness and desire to really put the opposition to the sword could cause some scary moments, so let’s hope that’s a lesson that’s been well and truly learned.

In terms of the team there was some positive news yesterday. Although Vermaelen, Arteta and Ramsey remain out, Tomas Rosicky trained fully yesterday with the aid of protective Phantom of the Opera (sadly not Ronald Reagan from Point Break) mask and will be in the squad. Whether he starts or not remains to be seen. Nacho Monreal could also be available which is a boost to our defensive depth.

I can’t foresee too many changes to the side that played against Villa, although it wouldn’t be a surprise to see Lukas Podolski get a start on the left. Santi Cazorla has struggled for form a little bit, and giving the German a run is a very decent option. He adds quality delivery from the left with a genuine goal threat, but the manager may want to stick with the Spaniard.

He scored against Sp*rs in the FA Cup and despite the poor ball which led to Villa’s goal, I thought he played quite well on Monday. I’m sure Podolski is absolutely chomping at the bit to get on the pitch though, so maybe the boss might make that change. Other than that, it more or less picks itself, especially at the back.

Beyond that there’s not a great deal to say about this game. It comes across as routine and in terms of the standings and performances of the two teams this season, we’re clear favourites. But that might mean a Fulham side with nothing to lose coming and playing without much pressure, and we do know they have a couple of players who can produce moments of quality which can hurt us.

Once we stay switched on at the back, and give a bit more up front than we did against Villa, then we should be able to see them off.

In other news, the manager said he’s hopeful of announcing new deals for both Per Mertesacker and Bacary Sagna soon. It would be a welcome boost to have them sign on for longer, especially Sagna. Much of how effective we’ve been defensively this season is down to consistency and being able to select the same back four week in, week out. It would seem wrong to let a major part of that go.

Mertesacker, of course, has more or less 18 months left on his current deal, but getting him tied down for the next few seasons is crucial given how important he’s become both on and off the pitch. Let’s hope we get good news soon.

There’s also the issue of the manager’s contract and he’s hinted he’s made his mind up about that. I don’t know if it’s two or three years, but the feeling is he’s going to sign, and that’s something that’s been backed by new boy Mesut Ozil who says:

Of course I want him to say. He’s the one who convinced me to come here, he’s a world-class manager and he can really push the team to its top level and players can develop under him.

It’s not just for me but the club in general and the fans it’s important that he will extend his contract and he will be the manager here for a long time to come.

It is an issue that needs resolving. Those, for example, who would want us to splash the cash and get a Draxler or similar player this January, have to reconcile that with the player’s desire to come to a club managed by the man who signed him. Basically, if Wenger was off in the summer, we’d have no chance of doing any deals like that. It would complicate the summer too because at this point you’d want to be well down the road of a succession plan.

So, it looks like Wenger will stay, and given the team he’s built this season, given that we’re competitive again, we’re prepared to modify our transfer strategy and given the paucity of genuine alternatives, I think that’s the right decision. The players love him, events at other clubs show you consistency is a valuable thing, so let’s hope what’s likely to be his final Arsenal contract is one that bookends his career here in the same way it began.

Elsewhere, reports suggest that Dutchman Andries Jonker is in line to take over from Liam Brady as head of Arsenal’s Youth Academy. I genuinely don’t know the first thing about him, but he’s said to have worked closely with Louis van Gaal at Barcelona and Bayern Munich. Whether that suggests a different approach to the job remains to be seen, but you have to think that first and foremost the culture of the academy is set by Arsene Wenger.

He’s looking for it to produce players who can play for the first team, who are aware of the style of play and what the manager wants from his players, so I don’t think it’s a case this guy is going to come in and implement tons of new ideas. Plus, you can be quite sure that the boss has been thoroughly involved in the recruitment/interview process, and none of this will be a surprise to him if/when the appointment is made.

As always, we’ll have full live blog coverage of the game later. Check back for a post with all the details, or simply bookmark our default live blog page. Updates begin automatically.

And if you fancy betting on the game sign up with Paddy Power: bet £10, and get a £20 free bet. To sign up, simply click here. And today Paddy Power are running a special: “If this match ends in a draw, we’ll refund all losing First Goalscorer, Last Goalscorer, Correct Score and Scorecast bets on the match!”

Right, have a good day, maybe have a listen to yesterday’s Arsecast on the way to the game, catch you for the live blog, and come on you reds.